Stealing in order to care for his sick daughter

Apologize and confess to Spider-Man.
Get Spider-Man to accept his apology for killing Uncle Ben (both succeeded).
Earn enough money to care for his sick daughter (ongoing).

He is a professional criminal who inadvertently causes the death of Peter Parker's uncle, Benjamin "Ben" Parker. Sandman is seen as a tragic villain because he is portrayed as a decent man who only breaks the law in order to afford the care his cancer-stricken daughter desperately needs. However, his powers and methods in order to do so makes him one of Spider-Man's most dangerous foes. Flint Marko's main weapon of choice was his own body, which he distorted to fit whatever purpose he wanted, although his main firearm was a Colt Python .357 Magnum revolver, which he used in his robberies prior to getting his powers.

He was portrayed by Thomas Haden Church, who also played Lyle Van de Groot in George of the Jungle, Dwayne LaFontant in Over the Hedge, Roach in Tales from the Crypt Presents Demon Knight, Quillgin in Regular Show, Killer Moth in Teen Titans, and Tal Hajus in John Carter.

Marko is introduced as a down-on-his-luck blue-collar worker whose young daughter, Penny, has cancer. In an effort to support her, the unemployed Marko turns to armed robbery to pay for her cancer treatments, at the same time becoming estranged from his wife. During one such robbery, Marko and his accomplice Dennis Carradine hold up a wrestling arena and flee the scene; while trying to escape, Marko accidentally kills Ben Parker, the uncle of Peter Parker, who will later become Spider-Man. Stricken with remorse, Marko surrenders to the police, and spends several years in prison.

After he is released, Marko is unable to find work, and reluctantly goes back to armed robbery in order to support his family. Despite his efforts, his wife refuses to have anything to do with him and goes out of her way to make sure he has no contact with their daughter. After a holdup goes wrong, Marko runs into a gigantic chamber filled with sand at a remote testing facility. Unbeknownst to Marko, the chamber is part of an experiment to test whether sand is an effective shield against radiation.

Marko hides from the police in the pit, but is soon buried in the radioactive sand, causing Marko to be genetically blended together with the sediment. This transformation gives him the power to shapeshift at will, turn his hands into weapons, and grow hundreds of feet in size. Marko uses his new-found powers to rob numerous banks, but he is thwarted by Spider-Man, who is growing increasingly unstable as a result of the alien symbiote fused with his suit. When Spider-Man discovers that Marko killed his uncle, the enraged superhero chases him into a subway tunnel and opens a pipe, causing a massive flood of water that disintegrates Marko and washes him away. Unbeknownst to Spider-Man, however, Marko survives and regroups.

Venom later comes to Marko and forms an alliance with him in order to kill Spider-Man. After Spider-Man kills Venom with one of the New Goblin's pumpkin bombs, Marko finally learns Spider-Man's identity, apologizes to him and tells him the whole story of Ben's death. Marko states that he is not asking for forgiveness, but that he only wants Peter to understand what he has been going through. Peter forgives Marko and allows him to escape peacefully into the wind, having finally come to terms with what he has done. It is unknown what happened to Marko or his family since. 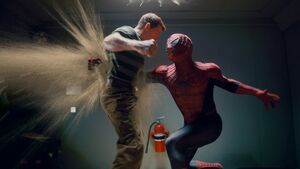 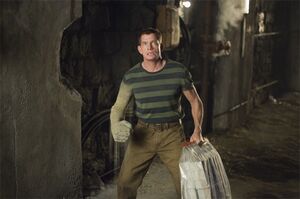 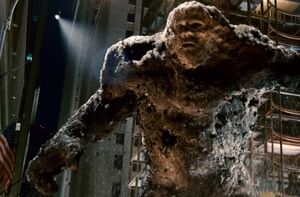 Flint looks at his daughter's necklace before Peter forgives him and disappears into the air after telling Peter the truth about Uncle Ben's murder.