Leader of the Scorpiss army

Annihilating any lifeforms that he considered weak

Sandros (サンドロス, Sandorosu) is the leader of Scorpiss army and the main antagonist of Ultraman Cosmos 2: The Blue Planet

Long ago, Sandros, his race met Ultraman Justice, who came to determine whether his race would be a threat to galactic peace. Even though they showed the possibility of being a threat, Justice let them live. Two thousand years later Sandros invades and destroys several alien worlds, turning them into a desolate wasteland for him, killing all who oppose him with his Scorpiss army. One of his attacks was on Planet Juran, where he killed Parastan. On the planet Gyas, Sandross pushed the ignorant race to near extinction. When he learned of their intentions for an attempt to restore their world, Sandros sent his legions after them as they fled their world, but were mostly killed some where saved this time by Ultraman Justice.

After that Sandros finally tracked them down to Earth, ending their mission of destruction. The beast goes to Earth when his heinous minions fail him. Killing the final insect-like monster itself, the monster attacked Cosmos non-stop. Blasting up the defensive ships and Cosmos, it seemed the guard had finally met his opponent. But a new opponent intervened, Ultraman Justice had arrived and attacked the monster from behind. As Sandros recovered, the other heroes recovered Cosmos' energy, allowing him to fight completely. Laughing out loud, Sandros started to release his black cloud. Unable to see the demon, Ultraman Cosmos and Justice were attacked by their energized blades repeatedly. Trying to track down Sandros, the two finally saw their chance. It foolishly stopped to fill the fireball, exposing it to the darkness it created. The two superhuman beings each fired their beams, blasting the assailant into oblivion. Sandros is said to be the reason behind Ultraman Justice joining Delacion, because humanity is also expected to be a threat within two thousand years, just like Sandros two thousand years later. 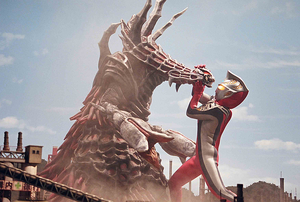