Delivering presents to kids whether they are naughty or nice.

Santa Claus is the main antagonist of the American Dad! series. Though Santa is known for being a friendly old man who gives presents to children who are good, American Dad! just like Futurama! ironically portrays Santa as one of the most evil characters in the shows universe to the point he kidnaps and enslaves any lost children who come to the North Pole.

He is voiced by Matt McKenna.

For Whom the Sleigh Bell Tolls

When Stan tries to teach Steve how to use a gun, the latter accidentally shoots Santa (whom at first they thought was someone in a costume). Upon recovery, though his near death was an accident, Santa vows revenge against the Smith family. He later sends an army of elves, reindeer, and snowmen to kill them. They are ultimately forced to retreat at dawn, though Santa declares he will try to kill the Smiths every Christmas Eve, thus bringing them a family tradition.

After Steve is kidnapped by the demon Krampus, Stan and Roger visit Santa to help rescue him. Santa agrees so that he can kill Krampus, and when he does so he promises Stan a permanent spot on the nice list. However, it is later revealed that he lied, as well as the fact that - while Krampus was only punishing children for love and discipline - Santa was spoiling them with presents so that he could earn money, since naughty children buy more toys than nice ones. After shooting Krampus, he attempts to shoot Stan, but Jack Smith sacrifices himself instead. After Santa and his elves retreat, the blood of Krampus transforms Jack into the new Krampus.

Santa wishes to awaken Humbaba so that he can obtain his power. To do so, he obtains his eyes through enslaving children, kidnapping Steve in the process. However, things do not go according to plan and he is swallowed by Humbaba. At the end of the episode, he is shown to be still alive.

Santa dies in this episode, much to the Smith's relief, who can now celebrate Christmas once more. However, upon learning Roger has his suit and is the new Santa he reawakens as zombie and goes on a murderous rampage on him. The Smiths end up helping him, but instead of being grateful he immediately betrays them and continues the rivalry.

Santa appears dancing during the song Everyone is Happy in Utopia, possibly redeeming himself... Or least he isn't doing bad things at the exact moment.

In his first appearance and in general, Santa is shown to be extremely ruthless, going as far as hunting down and attempting to kill the entire Smith family over an accident that led to his temporary death, in which numerous elves and reindeer are killed in the conflict.

He later has a comic relief adaption added to his character following his first appearance, and much more explored in his third. But he also becomes more and more villainous over the course of his appearances, later being shown to have been harbouring kidnapped children as slaves and numerous of whom have died working for Santa whilst attempting to get Santa's Grand Design plan underway.

Unlike the real Santa, this one seems to have no redeeming qualities. The closest he ever got was when he promised to let Smiths go if they simply listen to his story. But he immediately recaptures them when they politely refuse and he makes them listen to his plans anyway, implying he was never actually gonna release them, just wanted them to think it.

While Santa is has incredible resources and elf-power, he is also capable of Christmas magic. 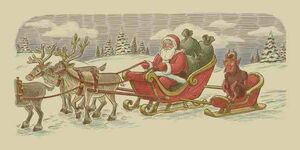 The legend of Santa Claus and his evil sidekick Krampus. 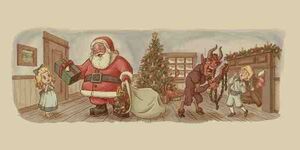 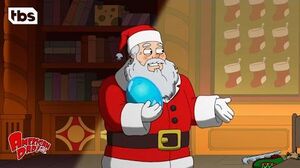 Retrieved from "https://villains.fandom.com/wiki/Santa_Claus_(American_Dad!)?oldid=4315045"
Community content is available under CC-BY-SA unless otherwise noted.