Command over an army of robot elves

Trick the humans into building a teleporter that will send them to their doom.

Santa Claus is the main antagonist of the Invader Zim episode "The Most Horrible Xmas Ever". It starts off as a suit created by Zim for him to pose as Santa, but the suit eventually overtakes him and becomes the true antagonist of the episode.

He was voiced by Scott Fortney.

After seeing that humans love Santa, Zim resolved to use the Christmas icon to help him conquer Earth. He did so by absorbing knowledge of Santa from a mall Santa and implanting in a suit for him to wear.

After the suit was completed, Zim put it on and pretended to be Santa, fooling the people of Earth into thinking Santa had returned. The President Man even gave up his position to Santa. In a TV interview, Zim told the humans to go to the North Pole to receive further instructions.

At the North Pole, Zim announced a "new Christmas tradition" where the humans would build giant teleporters that would send them to their doom. Dib, having deduced that Zim was posing as Santa, went to confront the Irken, only to be captured by his army of Robot Elves and locked up in a Candy Cane cage. However, after being hugged by some children, the Santa suit began to malfunction and fill Zim with Christmas joy, making Zim retreat back to his ship.

Later, Zim attached a restraining bolt to the suit to prevent it from overtaking him. The bolt ended up failing and the Santa suit began giving presents and singing to the people of Earth. However, Dib soon arrived, armed with his father's Anti-Santa weaponry. The Santa suit then transformed into a giant, spider-like creature and attacked Dib. Dib ultimately managed to defeat Santa, and Zim was freed from the suit. Zim then shrunk the suit down and launched it into space. However, this was not the end of Santa. Every Christmas, the Santa suit comes back to Earth to attack the humans and destroy their cities, hence why humans now live in giant domes. 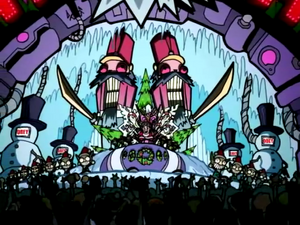 Zim/Santa speaking to the people of Earth. 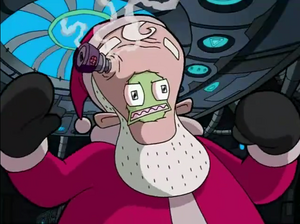 Zim with a restraining bolt attached to the suit. 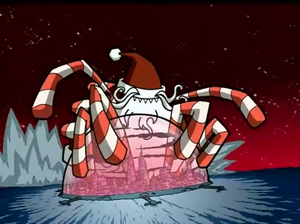 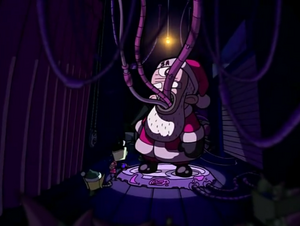 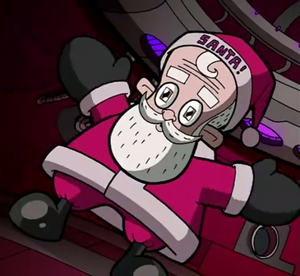 The Santa Suit after its creation. 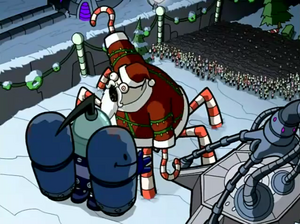 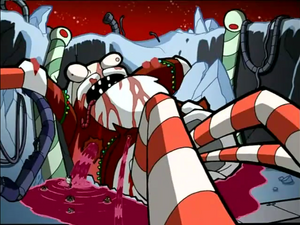 The Santa Suit after being defeated by Dib.
Add a photo to this gallery

Retrieved from "https://villains.fandom.com/wiki/Santa_Claus_(Invader_Zim)?oldid=3891673"
Community content is available under CC-BY-SA unless otherwise noted.