Contradictory
Santa Claus is a one-time villain from the Netflix original series, Paradise P.D., only appearing in the episode "Christmas in Paradise". He is a magical man who travels around the world every Christmas to give presents to all the good little boys and girls in the world. He is also a major distributor in the argyle meth corporation, working for Gerald Fitzgerald, as the drug designer.

In "Christmas in Paradise", Kevin got in contact with the argyle meth kingpin over the phone. Kevin pretended to be Robby and told the kingpin to meet him at the old abandoned warehouse, where he planned to capture him. When Randall arrested Kevin to keep him out of the argyle meth case, Dusty stood in for him and went to meet the kingpin.

At the old abandoned warehouse, the kingpin who showed up turned out to be Santa Claus. Dusty's heart was broken, when he found this out. Santa tried to make it up to Dusty by giving him a toy choo-choo train, which Dusty adored. Just then, Santa grabbed the train and strangled Dusty with it. Santa Claus started beating him up, taking off his gloves and pummeling Dusty with his bare knuckles. Dusty ran for his life and hid behind some Christmas trees but Santa whipped out a candy cane-shaped shotgun and started shooting at him. Dusty dodged all the bullets before Santa ran out of ammo. Santa pinned Dusty to the ground and got ready to officially kill him by bashing his skull in with a yule log. However, a blast of extremely bright light from the Paradise Christmas tree lighting blinded Santa and made him lose focus. Dusty got up and shanked Santa to death with a candy cane and unleashed a string of profanities into him, expressing just how much he'd lost his respect for him as a hero. After Santa died, he turned into magical Christmas dusty which flew away, completely removing his body from the scene.

Randall and Kevin came in to arrest the kingpin but since Santa was completely gone, there was no evidence of him being the criminal. All that was there was a blood-drenched dusty with a shank, standing next to a bag of argyle meth, which made him look immediately guilty. Dusty tried to explain that it was Santa but this of course only made him sound crazy so he got blamed for a crime that Santa committed and promptly arrested.

At the end of the episode, it turned out that Santa was not the kingpin after all, as he was just a distributor working for Gerald Fitzgerald. A flashback showed Santa working as the designed for argyle meth and in true Santa nature, he put chocolate in it and gave it a color scheme of red, green, and white. 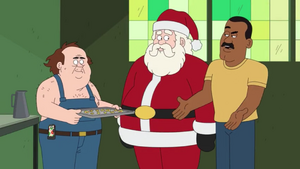 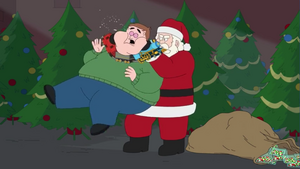 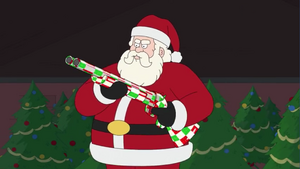 Santa with an argyle shotgun. 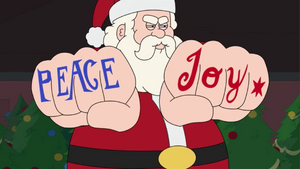 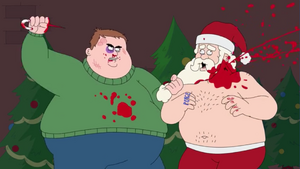 Dusty stabs Santa to death with a candy cane shank.