Not to be confused with Composite Santa Claus.

In Santa's first villainous role in the show, he parodies Kill Bill's O-Ren Ishii. He's noticably chubbier in this sketch than his future incarnations but still able to go one on one with Jesus in a sword fight.

While delivering presents on Christmas Eve, NORAD attempts to force Santa to land his sleigh, but he doesn't understand what they want at first. After they fire a rocket at Santa but miss, Santa fires a rocket of his own at one of the jets, killing them. The other jet then shoots Santa down to kill him.

Santa personally visits a child who made the top of Santa's naughty list and after violently killing his mother, he switches out the child's pistol with an unloaded one before shooting him.

After Santa hears that Coca-Cola is planning on replacing him as their mascot with Britney Spears and that they haven't been paying him to use his likeness, he decapitates her off-screen and then goes to their headquarters to send a message. He kills four of them and tells the survivors to send his check in the mail to the North Pole, then shows them the severed head of Britney Spears before leaving.

One Minute 'til Midnight

After Santa oversleeps until there's only one minute until Christmas, he hurriedly scrambles the elves together, threatening to beat them if they don't hurry and punching one of them into a bookshelf for not waking him up on time. He fires another Elf for getting the reindeer tangled up before flying away and throws presents down through roofs and doors, even hitting and killing several people and one of his elves by accident. When he can't open a door to deliver the final present, it's revealed he was dreaming and the handle he was trying to open was actually Mrs. Claus' throat, apparently having strangled her in his sleep before and having to be tased to let her go.

Santa fights with Jason Bourne from the Bourne film series to give his his present, but he's killed after being stabbed in the chest with a candy cane.

Santa makes a brief appearance in this sketch where he kills and eats five elves off-screen, having done this before with so many other elves in the past, they've had to include him in their safety video along with flesh eating reindeer and lizard-like monsters called Garlons.

After hearing World War 1 soldier Private Doyle wish for help against the Germans right before the Christmas Truce, he kills several German soldiers despite repeatedly being told by both sides that they've made a truce, only stopping when they were all dead and not caring when he actually learned a triumph of humanity was happening.

While Jesus Christ is going over motives as to who would want to murder Santa, a Snowman mentions that his people used to rule over the North Pole long before Santa ever arrived. According to him, Santa would force them to wear carrots on their faces and hats on their heads. He was also responsible for murdering "thousands" of them by sending them out to sea.

It's also mentioned that Santa injects the reindeer with steroids in order to pull his sleigh since the world population is always growing. These drugs eventually lead to the death of Prancer, who's arms were pulled off by a weightlifting machine.

During the credits, it's revealed that Santa Claus himself was behind the entire thing as he secretly replaced himself with Tim Allen and took a one billion dollar life insurance policy for his death. 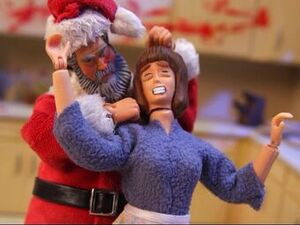 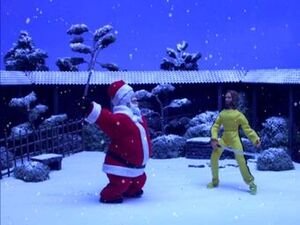 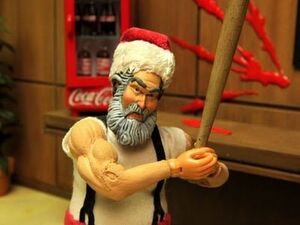 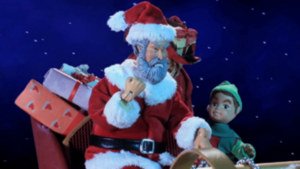