Murder as many people including children as possible before his inevitable imprisonment on the Day of Slaying/Christmas (succeeded).

Santa Claus is the titular main antagonist of the 2005 horror comedy film Santa's Slay. In the movie, instead of being a friendly elf as normal, he is a nightmarish demon who is set on killing as many people as he can. He had an impressive body count of thirty-five victims to his name (this being a bare minimum, as more may have occurred off-screen).

He was portrayed by the famous WWE wrestler Bill Goldberg, who also played Bob Smith in Looney Tunes: Back in Action.

According to the rather warped history of the "Santa's Slay" reality and the ancient Book of Klaus, the traditional Santa Claus myth is a lie and the jolly old elf is, in fact, an unholy child of Satan who was born of a virgin named Erica and thus somewhat of an Antichrist figure.

Christmas was the time of year that Santa committed mass murder (likely as a way of desecrating an otherwise holy holiday), thus this day of his bloodlust was called the Day of Slaying (roughly translated in the Norse/Norwegian dialect as "DagforMord" or "DagofMor").

That is until an angel who is one of God's powerful generals of Heaven's army came down to Earth in the guise of an old man and managed to beat Santa in a curling match in 1005 A.D. As punishment for his crimes, Santa was sentenced into delivering toys to the people he had formerly murdered for one thousand years.

Unfortunately, this imprisonment was not very effective, as it expired on the eve of 2005, allowing Santa to go on a bloody rampage, having had a thousand-year rest from his true calling as a destroyer of hope and bringer of death.

On Christmas Eve of 2005, Santa returns to the world as his true motive of a mass-murdering demon rather than a friendly giver of presents. He jumps down through the chimney of the Mason family and kills them all, stabbing Mr. Mason's hands to the table first, then using dark magic and other fighting skills to overcome all the people.

He kicks the family dog, incinerates Virginia's hair and drowns her in eggnog, he smashes in Gwen's head with a table leg, and kills Gwen's boyfriend with a karate kick, and then he kills Beth by throwing a star at her back and suffocates Mr. Mason with a turkey leg.

Santa flies his airborne sleigh, driven by monstrous Hell-deer, to Hell Township, Canada and proceeds to kill the locals in Christmas-themed methods, including burning a strip club frequented by adulterously crooked Christian minister Pastor Timmons. Santa engages in the Jewish Heaven sent deli and kills owner Mr. Green by strangling him with his own menorah. As Santa leaves the deli, he runs into Nicolas Yuleson, who he glares at menacingly.

Later on, Nicolas talks with his crazy grandpa, who hates Christmas, about why he always hated the festival. His grandpa tells him that Santa has never always been jolly and child loving and gives him The Book of Klaus, an Icelandic book in the Yuleson family's possession which details how Santa started life as the Antichrist, born of Satan's conception with a woman in Biblical times.

Santa was the Antichrist Jesus Christ came to warn people about, and in fact, the people prayed to Jesus every time there were murders around Christmas, committed by Santa. So, one year in 1065 B.C., God decided to intervene by sending an angel from Heaven which took the form of an old man. The angel confronted the young Santa, in the Pole, and confronted him with a curling match where if Santa's rock landed in the pool, then he could give the angel to Satan to roast forever.

If the angel's rock landed in the pool, then Santa had to cease the Day of Slaying. Santa, not knowing the man was an angel, arrogantly went first, and actually lost to the angel, enraging him and making him a bitter slave of God for a thousand years. Looking through the information, Nicolas realizes that this was a thousand years ago, meaning Santa can kill once more in 2005.

Upon arriving at the scene of Mr. Green's murder, Nicholas is taken to the police station for questioning. He is bailed out by his girlfriend Mary "Mac" Mackenzie, just before Santa arrives and kills all of the officers. Santa pursues them in a police car, but they are able to escape (thanks to a shotgun, left in Mac's truck by her gun-crazed father). They flee to Mr. Helsgejt Yuleson's bunker, with Santa still in pursuit. Nicholas and Mac manage to escape, hopped onto his grandpa's snowmobiles, but Grandpa is run over by Santa's "Hell-deer" and killed before continuing his nightmarish frenzy through Hell Township's Old Hell Township as the Day of Slaying has merely begun.

The two teens hide from Santa in a local high school, hoping that Santa's powers will end when Christmas ends, but are eventually forced to confront him in the gymnasium. They are almost killed by Santa on a Zamboni but are saved by Grandpa, who is actually the archangel by his real name "Helsgejt" that originally defeated Santa. With Christmas ended and his powers gone, Santa flees in his sleigh but his "Hell-deer" are shot down by Mac's father with a bazooka. Pastor Timmons is found dead in a Santa suit and is presumed to be the killer, while in fact the real Santa Claus under his modern alias "Mr. Shatan" is boarding a flight from Winnipeg to the North Pole. After that, Santa is seen looking over his Naughty List, when he looks into the camera and says, "Who's Next?"

Santa Claus is tyrannical, brutal, violent and cruel. He never shows remorse around people and he was trying to hunt down Nicholas and Mac. He is very sinful, prideful and sarcastic as seen when he ran over grandpa. Throughout the film, he enjoys showing off and killing anyone he can in a variety of ways and is willing to take any challenge. Despite this, he knew if he accepted a challenge and lost it would be his downfall, after spending many years upholding his deal once free he is quick to lie and attempt to damn the angel that defeated him years ago. Even then he seems less homicidal outside of Christmas but this is likely more pragmatic as he loses most of his powers for the rest of the year. 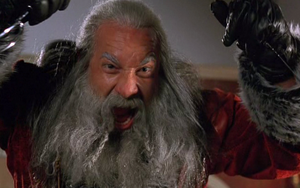 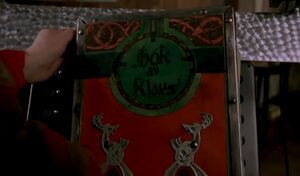 The Book of Klaus. 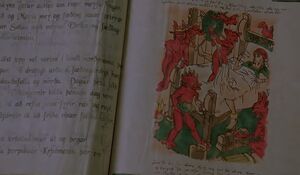 A chapter from the Book of Klaus depicting the union between The Devil and the mortal virgin Erica which led to the birth of Santa Claus. 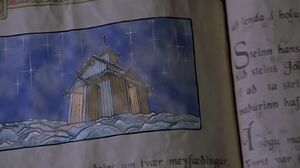 A chapter from the Book of Klaus depicting an 11th-century Icelandic church holding a Christ Mass. 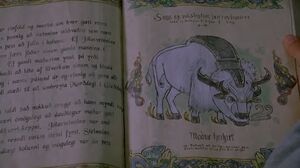 A chapter from the Klaus Book (Book of Klaus) with a depicted illustration of the Hell-deer. 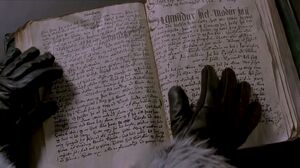 The pages of the Klaus Bók (Book of Klaus) containing the written entirety of the dreaded Santa Claus saga. 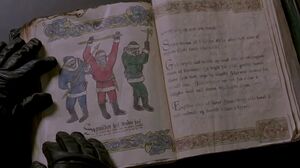 A chapter from the Book of Klaus contains an illustrated prophetic depiction of Santa Claus attacking 2 men at the Gold Diggers strip club in the modern Canadian town of Hell Township. 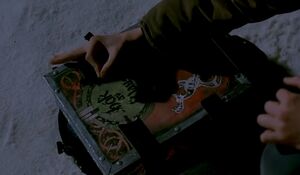 The Bók av Klaus, also known as the Book of Klaus. 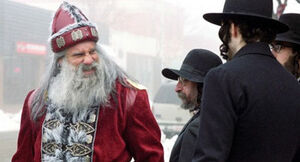 Santa's evil stare when he passes some Rabbis. 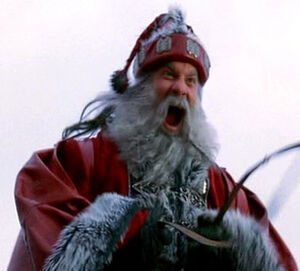 Santa in his evil glory. 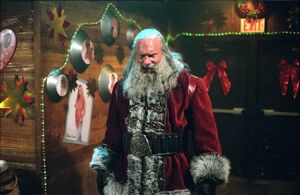 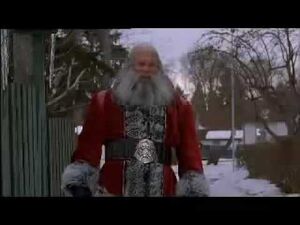 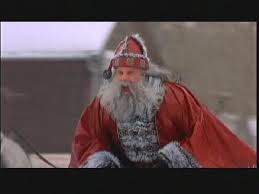 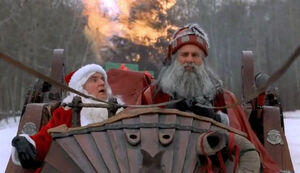 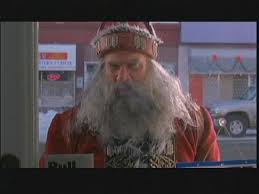 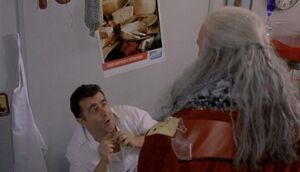 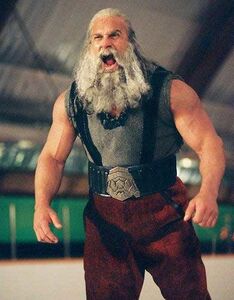