Delivering presents during the calendar holidays.

Santa Claus is a character from Teen Titans Go even though his personality is good, he is shown to be evil in some points. He serves as the main antagonist of the episode "The Teen Titans Go Easter Holiday Classic" and the Season 4 episodes "Halloween v Christmas" and later "Teen Titans Save Christmas", he serves as the secondary antagonist turned anti-hero of Season 4. He is the first holiday themed villain so far.

He was voiced by Robert Morse.

Santa Claus appears how Santa Claus should look like; a big, fat, jolly old man with a long white beard who wears a red coat with a matching red hat, green mittens, and a black belt and black boots. Unfortunately for innocence, is a materialistic and evil person who wants to hoard all the holidays outside Christmas without caring about people' illusion.

The True Meaning of Christmas

It was Christmas and Teen Titans discovered they were on the Santa' Naughty List so journeyed into the North Pole, where they sneaked into Santa's workshop and disperse. Raven and Starfire asked a gingerbread man where the naughty list was, but after a while, they started devouring everything in his house. Meanwhile, Beast Boy visited Santa's reindeer and ended up upsetting Rudolph with insults, as he drove away in Santa's sleigh.

Over in the toy factory, Cyborg got in with the elves and asked where the naughty list was, but the noise made the leader elf angry. The leader elf asked what was happening, and Cyborg blamed another elf, who was then carried away by Jingle and Jangle, as Cyborg got away.

Meanwhile, Robin investigated in Santa's office, standing over Santa's Naughty List, attempting to erase the Titans' name from the list. Surprisingly, it didn't erase as he expected, so he tried rubbing out the Titans' name first, used white out and then a mini bomb, but eventually gave up from the failures. He was then interrupted by Santa's dog, which intentionally barked to get Santa's attention. Santa came over and scolded Robin for his actions, but the other Titans eventually arrived to complain about how they didn't get their wish for presents for the past three years. Santa stated that presents are not the true meaning of Christmas, resulting in the Titans blowing up his toy factory. Forced against his will, Santa quickly confessed that the true meaning of Christmas is presents, and ended up taking the Titans in his sleigh, who helped him give all nice and naughty people presents.

It was Easter and Teen Titans found no evidence that the Easter Bunny had even visited their island and deduced that he must be missing. The Titans got in the T-Plane and flied off in search of the Easter Bunny, but quickly realized they have no idea where he lived. Each Titans pieces what they knew about the Easter Bunny (that he has pink fur, a vest, and hang outs with marshmallow chickens). Starfire believed the Easter Bunny is part man and lays candy eggs, leaving a mental image that grosses out Raven.

With little information to work from, the Titans decided to interrogate mascots from other holidays, including Cupid, George Washington, the St. Patrick's Day leprechaun, and the Thanksgiving Turkey. Robin, Cyborg, and Beast Boy interviewed Cupid and were put under the influence of his love arrows. The three lovesick Titans lost focus from the interrogation and insteaded try to woo each other, all while having googly eyes. Raven and Starfire, in the meantime, tried a "good cop/bad cop" strategy to wheedle information out of George Washington. Donning mustaches and utilizing a poorly drawn doodle, the two started the interview, only to have Starfire almost immediately began smashing Washington's head into the table. The Titans weren't successful with the rest of the interviews, as Robin, Cyborg, and Beast Boy were still under the influence of the love arrows and Starfire's tactics couldn't get the Thanksgiving Turkey to talk... turkey.

Robin then decided that the next best course of action was to go to the big man himself: Santa! The only information they could get from Santa is that the Easter Bunny had possibly gone berserk or had some kind of nervous break down (he really only made gestures and assumed the Titans know what he meant). Santa then offered to lend a hand by delivering the Easter eggs around the world. The Titans agreed that Santa was the man for the job and left him to it, not noticing his sinister grin.

The next day, the Titans found that Santa had hidden eggs in plain sight all over their yard (as well as caused some unseasonable snowfall). The Titans were overjoyed not only for having found so many Easter eggs, but to see that they had been decorated with a Christmas theme.

Suddenly, Robin had a hunch about the whereabouts of the Easter Bunny, and with that the Titans returned to Santa's workshop. In a guarded warehouse, they found that Robin's hunch was correct: Santa was kidnapping holiday mascots so that he could take over every holiday!

Santa suddenly appeared from the shadows, petting an elf like an evil super villain. He explained that people already started putting Christmas decorations up as early as October and that he should have control of every holiday on the calendar. EVEN PURIM!

The Titans prepared for a showdown with Santa, who got into a giant mech-suit. Fighting Santa would be too much of a challenge for the Titans, so Raven used her magic to free some of the lesser holiday mascots from their cells. Cupid was taken out of the fight quickly by some freeze breath, and the Thanksgiving Turkey was useless in a fight. The Leprechaun got in a shillelagh whack before George Washington defeated Santa with a combo of patriotic attacks.

With Santa all tied up, the Titans freed the Easter Bunny, only to find out that Starfire was right: the Easter Bunny is half-man, half-bunny, and he lays an Easter egg right in front of the Titans who looked on or away in disgust. 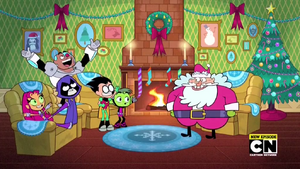 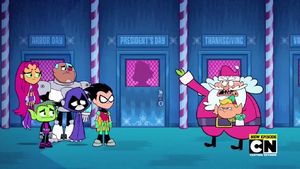 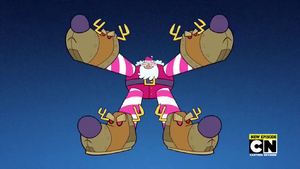 Santa in his giant mech-suit 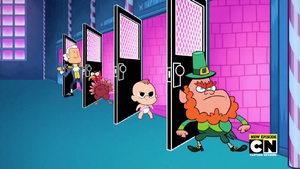 Raven frees some of holiday mascots 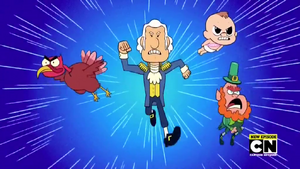 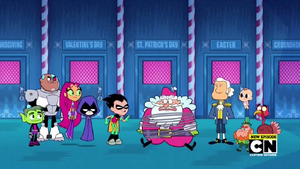 Santa' defeat
Add a photo to this gallery

Retrieved from "https://villains.fandom.com/wiki/Santa_Claus_(Teen_Titans_Go!)?oldid=3529987"
Community content is available under CC-BY-SA unless otherwise noted.