Killing and torturing any in his path.

Cause as much chaos and madness as possible.

The lyrics describe how Santa arrives one night at the North Pole drunk and unhinged, scaring the elves working there and quickly going on a violent rampage in which he engaged in a mass-shooting of his own Workshop, killing many of the elves.

Santa then proceeded to bomb the Workshop, killing Cupid and Comet in the process before he tied up some surviving elves to take hostage (while dosing the ground near them with gasoline) - he then killed off Rudolf in a gruesome manner to make reindeer sausage before shooting Dancer and Prancer with a handgun and slashed Dasher to death using a Freddy Krueger glove.

Santa's bloodlust was far from over and he would obtain a flamethrower to barbecue Blitzen just as the National Guard and the FBI arrived on the scene, resulting in even more violence as Santa engaged in a one-man standoff against these forces, killing scores of people in the process.

Eventually Santa is captured and put in a Federal prison, where the lyrics state he may be released on good behavior in 700 or so years.

However, in the "Extra Gory Version" on The Essential Wired Al Yankovic album, Santa is instead shot in the head by a SWAT member and killed. 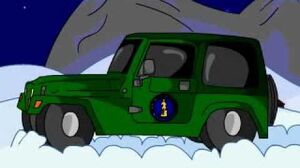 The Night Santa Went Crazy
Add a photo to this gallery
Retrieved from "https://villains.fandom.com/wiki/Santa_Claus_(The_Night_Santa_Went_Crazy)?oldid=3103747"
Community content is available under CC-BY-SA unless otherwise noted.