Santana, also known as Santviento in the English dub of the anime, is a minor antagonist in JoJo's Bizarre Adventure: Battle Tendency. Santana was found by Speedwagon and the Nazis while he is sleeping in a stone pillar in Mexico. He is the first Pillar Men who meet and fight Joseph Joestar, and is the weakest of them.

In the anime, Santana is voiced by Kenji Nomura in Japanese and Kaiji Tang in English.

Santana was an infant Pillar Men, who was took by Kars, after their race have ceased to exist. He would help his master to look after the Red Stone of Aja, being sent to America, where the Ripple Clan imprisoned him on a large pillar (which gave them their namesake) and buried him on a ruin in Mexico, along with tons of Stone Masks. An ancient civilization would use the masks on rituals, but they ceased to exist.

Eons later, during World War II, Robert Speedwagon would find him, while looking for the origin of the masks. The Nazis discovered about the Pillar Men's existence, sending a group to secure and study him. The group, led by Rudol von Stroheim, take him to a secret base, where they resurrect him and name him Santana. Although he seemed to be just a primitive being, they soon learned their mistake as he manages to escape and possesses one of the guards using Malevolent Meat Morsels ability and fights them.

Just then, Joseph Joestar breaks on the place, looking for Speedwagon. He is forced to fight Santana, but is unable to use his Ripple Energy against him. So Joseph pretends to be exhausted and, while Santana absorbs him, he sends the ripple from inside of him, leaving Santana with only the upper part of his body. Now genuinely exhausted, Joseph tries to carry Santana outside of the base to finish him but, as Stroheim tries to open the door, Santana possesses him with Malevolent Meat Morsels. Stroheim forces Joseph to cut his leg to stop Santana from entering him but to no avail. They get outside, so Stroheim decides to blow himself with a pipe grenade, so Santana will finally be exposed to the sun. As he explodes, Santana gets out of him, so Joseph lures him into a well and, as dawn strikes, he is hit by sunlight without any shadow to cover, becoming a stone. Speedwagon takes him to his foundation, where they study him. The Nazis resurrects Stroheim by turning him into a cyborg, with many weapons that could counter a Pillar Man. The Pillar Man is revealed to still be alive. Santana's ultimate fate is never addressed. 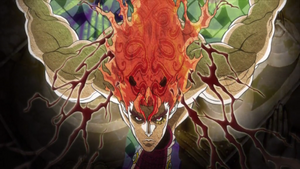 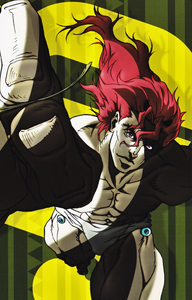