To get Madison Rayne to love her

Psychotic Villainess, Femme Fatale
Santana Garrett is a female professional wrestler who has competed mostly on the independent circuit. She is best known for her stint as a villainess in TNA under the name Brittany.

Santana Garrett first appeared in TNA at the first Knockouts Knockdown event in 2013, portraying an arrogant heel (villainess) in a losing effort against Brooke Tessmacher. She would become an official TNA Knockout in January 2014 and she debuted as a babyface under the name Brittany two months later and defeated Gail Kim.

Brittany stated in an interview that she idolized Madison Rayne, and for months, she did anything to get closer to her, even suggesting that she had romantic feelings for her. After Madison rebuffed her advances, Brittany became upset and wanted to know why she didn't like her. A week after the confrontation, Brittany and Madison ran into each other right before Madison's Knockouts Championship rematch against Angelina Love, and Madison told her to do absolutely nothing, which is what Brittany did—even while Velvet Sky interfered on Angelina's behalf.

On the July 3 edition of Impact Wrestling, Brittany called out Madison and agreed to only be friends with her. After the two hugged each other, the evil Brittany attacked Madison to cement herself as a villainess. Brittany stated that she learned to never meet your heroes, because they always disappoint, and later continued her attack on Madison inside and outside the ring, while mockingly stating that they're not friends anymore. On the following week, Brittany attacked Madison as they both entered the ring for their Knockouts Championship four-way match against Angelina Love and Gail Kim, who won to retain her title. On July 17, Brittany competed in a losing effort against Madison in a No DQ match.

After her feud with Madison ended, Brittany started displaying signs of affection for Samuel Shaw. She managed to seduce Shaw into turning against his long-time tag team partner Gunner; which Shaw did by attacking Gunner with a series of steel chair attacks, while Brittany laughed evilly and watched with sadistic glee. The attack seemed to excite her, and she jumped into Shaw's arms and started making out with him.

On the 5th November edition of Impact, Shaw and Brittany came out to explain their actions, but were interrupted by Gunner, who seeked revenge. Gunner tried to attack Shaw but Brittany jumped on him which allowed Shaw to hit Gunner with a low blow, bringing him down. Shaw then choked out Gunner as Brittany watched with obvious pleasure, and then seemingly excited by the attack, she stood over Gunner and made out with Shaw.

The following week on Impact, Brittany lied to Shaw backstage and said that Gunner had come on to her, enraged, Shaw walked off while Brittany smirked wickedly, pleased with getting the reaction she wanted from Shaw. Later in the night Shaw sneak attacked Gunner on his way down to the ramp, while Brittany laughed and cheered Shaw on, before kissing him, and then encouraging Shaw to hurt Gunner some more. She also delived a kick down low to Gunner, which brought him to the ground in pain, while Brittany looked on with satisfaction at what she had done. In November 2014, Brittany's contract with TNA expired.

Brittany's villainous role and the angle that led to her heel turn have drawn comparisons to that of Mickie James when she was in her own angle with Trish Stratus. Among her list of traits, Brittany is portrayed as delusional, psychotic, and very vengeful. 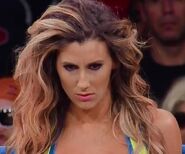 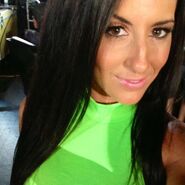 Impact Wrestling 22 October 2014: Shaw attacks Gunner with a chair, much to the delight of Brittany

Impact Wrestling 22 October 2014: Excited by the attack, Brittany makes out with Shaw

Impact Wrestling 5 November 2014: Brittany stands over the fallen Gunner, and makes out with Shaw

Impact Wrestling 12 November 2014: Brittany enjoying Shaw's attack, before kissing him and telling him to hurt Gunner some more

Impact Wrestling 12 November 2014: Delivering a low blow to Gunner
Add a photo to this gallery
Retrieved from "https://villains.fandom.com/wiki/Santana_Garrett?oldid=1990444"
Community content is available under CC-BY-SA unless otherwise noted.