Queen of Blades
Queen Bitch of the Universe

Queen of the Zerg

Assimilating planets into the Zerg.

Eliminating enemies of the Zerg.

Eliminate the Zerg Cerebrates to gain control of the Zerg.

Sarah Louise Kerrigan (usually just called Kerrigan) is one of the main antagonists of the real time strategy video game franchise StarCraft (alongside the Overmind and Arcturus Mengsk).

She is voiced by Tricia Helfer, who also portrayed Goddess in Lucifer, Boodikka in Green Lantern: First Flight, Espheni Queen in Falling Skies and Carla Baxter in Burn Notice.

Sarah Louise Kerrigan was born in 2473. When she was a young girl, an innocent flash of childish anger at her parents resulted in massive cerebral hemorrhaging caused her mother's head to come apart. This alerted the Terran Confederacy that she was psychically gifted, and she quickly became the focus of the fledgling Ghost program. The neural processing treatments that were used to dampen and pacify her latent psychic powers left her a withdrawn and introverted young girl. Because she had reached unheard-of scores on psi-evaluation tests, her abilities elicited a complete readjustment of the scoring system so that she could be properly measured. Potent psionic abilities, unmatched courage, sharp tactical instincts, and lethal training in both melee combat and ballistic weaponry led to her quick rise through the ranks of the Ghost program. The remnants of her humanity were stripped from her, and she was designated Ghost Number 24601.

Following her emergence from the program, she became an unstoppable assassin for the corrupt Confederate government. When Senator Angus Mengsk declared Korhal's independence from the Confederacy, Kerrigan and two others infiltrated his towering, fortress-like headquarters and assassinated him. She was then taken to a clandestine experimental facility and became part of a series of experiments with a race of insect-like creatures known as the zerg.

She was rescued from the Confederate scientists by Arcturus Mengsk, son of Angus and leader of the Sons of Korhal, an anti-Confederate revolutionary group. Mengsk removed her neural inhibitor and used her restored memories to build righteous anger against the government that had abused her. She was given the rank of lieutenant and became his second-in-command.

Over a year later, she was running a mission on Antiga Prime when she first came across Captain Jim Raynor, an ex-Confederate Marshal who had recently joined the Sons of Korhal. She caught him thinking dirty things about her. Using her personal cloaking device, she infiltrated the Antigan command center and killed a Confederate officer, setting off an open revolt against the Confederacy. Soon afterward, when Mengsk ordered Raynor to save General Edmund Duke, Kerrigan expressed her dislike for the idea but Mengsk pulled rank on her.

Two hours after a large Confederate strike force arrived on Antiga Prime and established a base camp within their defensive perimeter, Mengsk called a meeting where Kerrigan explained that those running the Ghost program found that the zerg were attuned to the psychic emanations of Ghosts and that Raynor had stolen designs for a Transplanar Psionic Waveform Emitter, which broadcasted the neural imprint of a Ghost, but at a much greater magnitude. Mengsk ordered her to plant an emitter at the Confederate base camp, but she didn't feel like anyone deserved to have the zerg unleashed on them. She expressed her doubts, but Mengsk told her she was letting her past cloud her judgment and pulled rank on her again. Once the emitter was in place, she told Mengsk to promise her that they would never do anything like that again.

Traveling on Mengsk's flagship, the Hyperion, to the Confederate capital world of Tarsonis, Kerrigan was shocked when she learned that Mengsk authorized the use of psi emitters against the entire planet. She voiced her opposition, but Mengsk pulled rank on her yet again. After she neutralized the protoss, a wave of zerg advanced on her position. She called for immediate evac before battling a hydralisk, after which time she realized that she hadn't gotten a response and asked what was going on. Realizing she was surrounded by approaching zerg, she dropped her C-10 Canister Rifle and closed her eyes.

The Zerg Overmind recognized Kerrigan's psychic abilities (as well as the fact that she could save the Zerg from the control of the Dark Voice) and encased her in a chrysalis. Inside this chrysalis, Kerrigan began to become a Zerg. When the chrysalis hatched, a new Kerrigan emerged. Mengsk, now the Emperor of the new Terran Dominion, which had succeeded the Confederacy, heard Kerrigan's psychic cry and sent forces to the planet, Char, to investigate. Raynor also arrived on Char, as he had heard the cry too.

Kerrigan's forces decimated the Dominion's and Raynor's forces. She still retained her humanity, but was connected to the will of the Overmind, as well as stripped of any ethical restraints and conscience she had once had. Kerrigan crowned herself Queen of Blades and assaulted the Protoss templar, Tassadar. Tassadar was merely distracting Kerrigan, however, and the dark templar, Zeratul, killed the Cerebrate, Zasz. Because of Zeratul's dark energies, Zasz could not be reincarnated by the Overmind. Kerrigan showed no regret for this.

After the Overmind's destruction and the UED Invasion, Kerrigan began her campaign for domination, resulting in the Brood War. She first manipulated the protoss and enslaved the Dark Templar Leader. Afterwards she arranged an alliance with Arcturas Mengsk, Jim Raynor, and Fenix to fight the UED. After using them to destroy the primary base of the UED Kerrigan betrayed them and murdered General Edmund Duke, Fenix, and many others. Raynor denounced her as a monster and swore to see her dead.

This seemed to effect her, and for the first time she decided to rest. After this lull was interrupted by the UED, Kerrigan blackmailed Zeratul into destroying the second overmind, before refusing to release the Dark Templar matron (whom she had brainwashed and captured.) Zeratul was ultimately forced to kill his leader to keep Kerrigan from recapturing her, and Kerrigan let him leave as an act of spite. Soon afterwards, Mengsk, the UED remnants, and the protoss attacked her base on Char Aleph. With the help of her Cerebrate lieutenant, she was able to crush the enemy forces and become the dominant force in the kopralu sector. Despite having the power to crush her foes she opted to give them a chance to recover.

After 4 years of lying dormant, Kerrigan took the swarm to war in order to collect pieces of an ancient Xel'Naga Artifact. Her old friend Jim Raynor beat her to the punch and collected the artifacts before joining forces with Valerian Mengsk.

The combined force of Raynor's Raiders and the Terran Dominion invaded Kerrigan's throne world, initiating a titanic clash in which both sides suffered massive casualties. Despite Kerrigan's efforts Raynor was able to rally the survivors into a sufficient fighting force, and the very artifact that Kerrigan started the war for was brought into the field. During the final assault, Kerrigan herself entered the battle, but was driven away; strangely, there was a brief instance when the original kerrigan broke through to encourage Jim. Ultimately the Terrans were succssessful, and the artifact successfully activated, obliterating Kerrigan's army, as well as deinfesting her into a human once more.

As Raynor and his men entered the hive, they discovered a weakened and dazed Kerrigan; though parts of her remained Zerg, the cruelty and malice that had defined the Queen of Blades had vanished. Tychus Findlay tried to shoot her, but hesitated long enough for Raynor to block the bullet with his armor and shoot him. Raynor picked up Sarah, and carried her across the battlefield.

After Amon was defeated, Kerrigan heard a benevolent voice calling her, telling her that Amon lived, his hate festered in the Void and that he planned to return. She sent out a psionic transmission to Artanis and Raynor. They came to Ulnar and she met with them in the War Council of Artanis's arkship, the Spear of Adun. She told them that there was a gateway to the Void within Ulnar and asked for their help in going through it and destroying Amon once and for all. Kerrigan, Raynor and Artanis led their forces into the Void and defeated Narud.Kerrigan found that the one who called to her was a xel'naga named Ouros, who told her that she could merge with his essence, ascend as xel'naga and continue the Infinite Cycle. Raynor urged her not to, but she replied, "With all I've done-the lives ruined... worlds destroyed... There's blood on my hands. I need to cleanse it. This is my destiny." Once Kerrigan had nearly all of Ouros's essence, she relinquished control of the Swarm to Zagara. Now a xel'naga, Kerrigan destroyed Amon's Void crystals. Once Amon's barrier of energy had fallen, he told Kerrigan that she was but a product of the flawed cycle, manipulated for the entirety of her existence, to which she replied, "You know nothing about me! I care little for the xel'naga's Infinite Cycle or your twisted lies. No, I choose something different. I choose freedom... for all of us." As Kerrigan destroyed Amon, she told Raynor to go.

2 years later, Kerrigan appeared human again before Raynor in Joeyray's Bar on Mar Sara. She asked, "You about ready to get out of here, cowboy?" 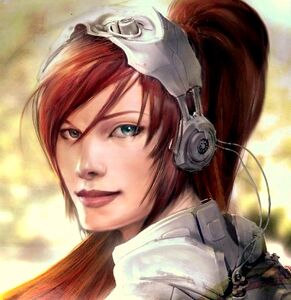 Sarah Kerrigan as a Ghost 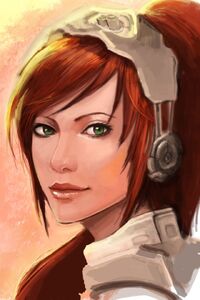 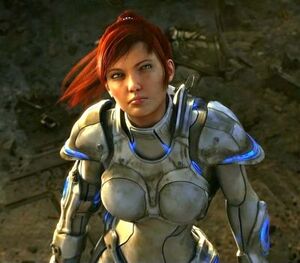 Sarah Kerrigan moments before her infestation 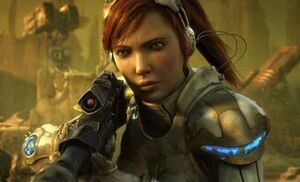 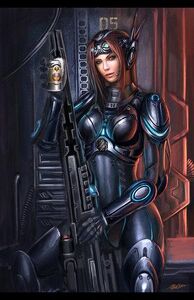 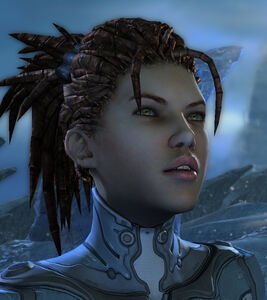 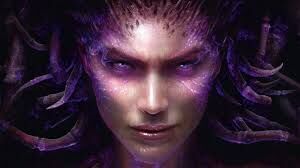 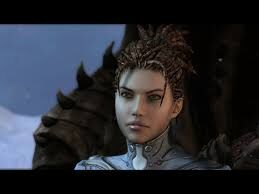 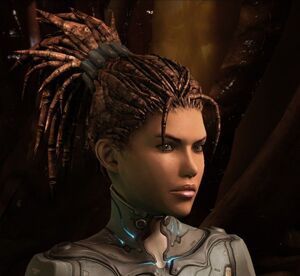 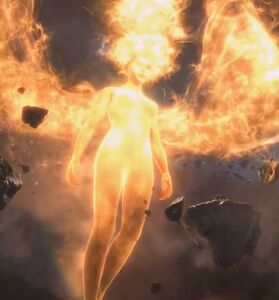 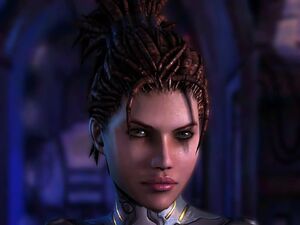 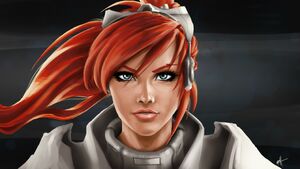 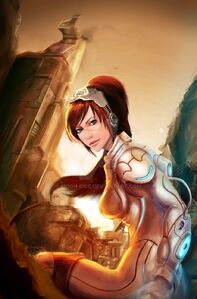 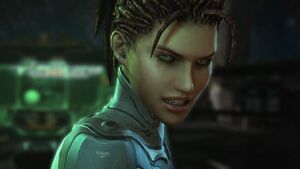 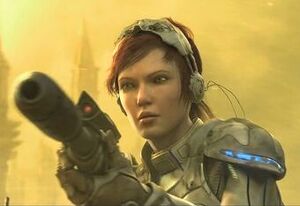 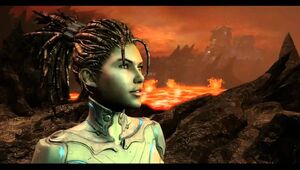 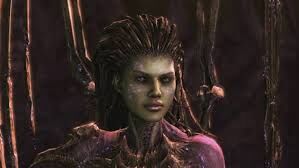 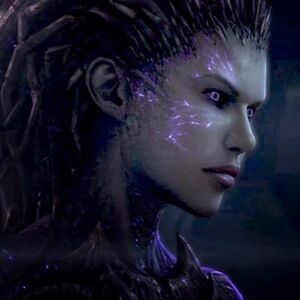