To poison all vampires with Hepatitis-V.

Sarah Newlin is one of the main antagonists of the HBO series True Blood. She is an ex-wife of Steve Newlin, who ran an anti-vampire religious cult known as the Fellowship of the Sun with however he was never showing her attention that she felt she deserved which she would have a affair with Jason Stackhouse, after the fall of the Fellowship of the sun she divorced Steve and began a relationship with Governer Truman Burrell.

She was portrayed by Anna Camp.

Sarah Newlin had a sister who was in love with a vampire and Sarah originally was open hearted about welcoming Vampires however in the end her sister would be killed by a vampire which led to Sarah's new found hatred in which she shared with Steve Newlin who lost his father to a vampire attack and also had hated vampires due to Steve's Manipulation of shared hatred this lead to her Mental Instability.

Introduction and Return as the Main Antagonist

Sarah and Steve were not close to one another, and were only focused on one goal together to kill all Vampires, she would commit acts of infidelity on Steve with the newest Member of their Cult Jason Stackhouse, however when the two divorce, Steve went missing for a very long period of time, only to resurface as a Vampire, appearing to Jason Stackhouse and revealing that he also had feelings for Jason, only for Jason to reject those feelings,

Sarah would return once again in the 6th season even more ambitious than she was before being in a relationship and partnership with the Governer of Louisiana Truman Burrell creating a Vampire camp in which they would study and eventually kill all Vampires, however the governor would soon be killed by an enraged Bill Compton during a confrontation in broad daylight who would use his new found powers to control the Governor's security to aim at each other and shoot and kill one another, Sarah would discover the Governor's decapitated head, and have a nervous breakdown which resulted in her taking over the vampire camp in it's entirey, she would be confronted by a woman named Ms. Suzuki who is over Tru Blood, and discovers that they were contaminating her product, in an attempt to inform her boss of this, a fight broke out between the two in which Sarah looked absolutely miserable trying to fight her which lead to a chase between the two, Sarah only got the upper hand when Ms. Suzuki snapped her ankle trying to walk in high heels on a gridded platform in the male vampire population, in which Sarah would take advantage of this opritunity to take Ms. Suzuki's high heel shoe and beat repeatedly in the back of the head with it all the while bashing he face into platform causing blood loss and arrousing the male vampire one who bit on her face holding her down as Sarah impaled the back of Ms. Suzuki's skull with her high heel shoe. 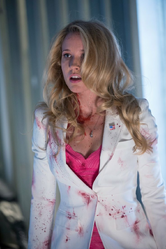