To unleash her wrath upon the world of the living and destroy all humans.

Sarah Ravencroft is the secondary turned true main antagonist of Scooby Doo and the Witch's Ghost. She is an extremely powerful, evil witch and the ancestor of the famous horror writer Ben Ravencroft.

Originally as a human, Sarah Ravencroft appears as young and beautiful woman wearing Wiccan clothing with a necklace around her neck.

But in reality, as a ghost, Sarah Ravencroft appears as very pale middle-aged woman, probably as the way she died. She wears a lavender dress and a red pendant.

Her descendant, Ben, lied about her completely because it hid his true evil intentions well. He portrayed her as a beautiful, pleasant-looking young Wiccan, whose kind and gentle nature led her to help many people who could not afford medical treatment.

In reality, within the year of 1657, Sarah Ravencroft used her magic to terrorize and kill innocent people. Fortunately, the Wiccans (people who worked in tune with the forces of nature for healingand other benevolent purposes) were able to defeat Sarah by using her own magic against her - imprisoning her in her own spellbook.

Centuries later, however, her descendant from the modern world, Ben, tricked the Mystery Inc. into helping him find her spellbook. After using it to acquire new magical powers, an insane Ben proceeded to free Sarah from her prison, believing that their combined magic would make them an unstoppable force, enabling them to reign supreme over the world. However, ancestor and descendant quickly got into an argument, since Sarah rejected the idea of ruling the world together, and instead wants to destroy it - "Thou hast freed me, so now I can punish the world for my long imprisonment. I shall create an era of darkness over this land". She also showed how ruthless and cruel she can be, warning Ben, her descendant, the very one who had freed her, not to cross her - "I care not for thy whims. Cross my path and I shall destroy thee along with thy world". Horrified and disillusioned by this, Ben attempts to imprison Sarah back into the book, but she

simply laughed in his face and said: "Thinkest thou art a Wiccan? Only a virtuous soul can imprison me", revealing that only a true, pure-hearted Wiccan can banish her. She then proceeded to trap Ben in a magical sphere, and laughed as he screamed to be released.

Velma then gets an idea. She frees the Hex Girls, and while Dusk and Luna try to release Mayor Corey and Mr. McKinght, Velma convinces Thorn to read the banishing spell. Initially, she refuses, but then understands that she is the only one who can stop Sarah - "You still have Wiccan blood. Which means only you can read the spell that will send Sarah Ravencroft back to where she came from." Velma then sends Scooby and Shaggy to get the book. The gang tries to get the book many times, but Sarah keeps transforming pumpkins, trees, and even a turkey into monsters to stop them. Eventually, the gang obtains the book, each throwing it to another person when they get captured, until it reaches Thorn. Ignorant of what was really going on, Sarah laughed, stating that "the book is useless to a mere mortal", only to be outraged when Thorn's Wiccan blood allowed her to channel the book's magic to avoid being captured by a monster tree. She then flew towards Thorn - "I'll stop thee myself!" With Velma's urging, Thorn hurriedly chanted the spell, finishing it just as Sarah's fingers grab the book. The spell had worked: it weakens Sarah, knocking her backwards with its incredible force, and even reverses all of the spells she had cast (her monsters turn back to normal, except the turkey, which later became Oakhaven's new "big" attraction). However, just before it sucks her in, Sarah grabs Ben and drags him in with her, shouting that "I won't go back alone". A burning branch falls on the book, disintegrating it (apparently forever trapping or killing the two villains). Velma, upon seeing this, solemnly said: "Ben Ravencroft's last book is one the world will never buy).

Sarah Ravencroft displayed a very sadistic and evil personality. She was also power mad and displayed no compassion or any other humane feelings, even to her own family as shown with her interactions with her descendant Ben Ravencroft.

Sarah Ravencroft was arguably the most powerful and terrifying witch Mystery Inc. had ever faced, all the more so since her supernatural powers were potent and real. Her witchcraft enabled her to perform numerous terrible yet nonetheless-spectacular feats:

As a ghost she could fly, expand her body and phase through solid matter. 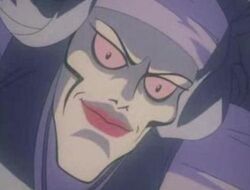 The spirit of the legendary witch Sarah Ravencroft. 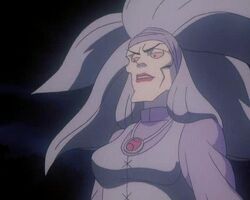 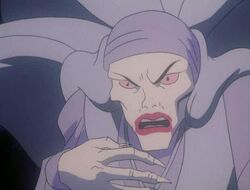 Sarah Ravencroft cares little for her descendant Ben and his plans to subjugate the world. 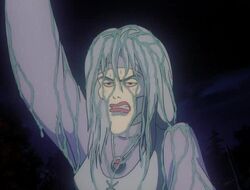 Sarah Ravencroft got wetted by the foolish Shaggy (a parody of The Wizard of Oz). 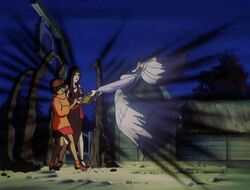 Sarah Raven unable to touch and regain her spell book after being repelled and cursed an incited spell used by Thorn of the Hex Girls.
Add a photo to this gallery

Retrieved from "https://villains.fandom.com/wiki/Sarah_Ravencroft?oldid=897992"
Community content is available under CC-BY-SA unless otherwise noted.