Suck the life force from children to stay young and beautiful forever (failed).

She is the youngest witch of the Sanderson Sisters. In 17th century Salem, Massachusetts, Sarah had an affair with her sister Winnie's lover, William "Billy the Butcher" Butcherson. When Winnie found out, she jealously poisoned Billy and sewed his mouth shut with a dull needle. This infidelity may have caused Winifred to hunt down youth and beauty, as she may have thought that her sister's greater beauty stole Billy from her. Ever since then, their sister Mary has had to act as a peacemaker between the two.

She was portrayed by Sarah Jessica Parker.

In the seventeenth century, Sarah lures Emily Binx into the forest to the house where she and her sisters live. However, what she does not know is that Emily's older brother named Thackery Binx saw them enter the forest and followed them. Inside the house she helps her two sisters, Winifred and Mary, concoct a potion which will allow them to take the life force of children in order to remain young. Thackery interrupts this, however, and pours most of their potion on the floor before they can give it to Emily, but he is soon overcome by Winifred, and they proceed to inhale Emily's life force, killing Emily. They then proceed to turn Thackery into a black cat with immortality so he can 'live forever with his guilt'. But once they perform this spell, the villagers arrive at their house, and as Winifred and Mary barricade the door, Sarah stupidly says what the witches were doing.

The villagers capture the witches, but Winifred prophesies their return via the Black Flame Candle lit on All Hallows Eve by a virgin. Sarah and her sisters are subsequently hanged and left within the forest.

300 years later, a Californian boy named Max takes his sister trick-or-treating and gets together with Allison, whose mother used to run the museum that was the Sanderson house. They break into the house and Max foolishly lights the candle, thinking that it's just a bunch of hocus pocus, and ends up resurrecting the Sandersons. Max steals Winifred's spellbook at the behest of Thackery so that Sarah and her sisters cannot create the potion needed to steal the life force of children and they run.

The children all ran to the cemetery as Thackery led them. However, the witches all followed them on their broomsticks and nearly got the book back. However, before they can escape Winifred raises Billy Butcherson, her former lover, back from the dead and instructs him to get the book back before flying away to the outside of the cemetery as they cannot set foot on hollowed ground. There, they employ the help of a bus driver, ask him to find them children and eventually come across a house owned by a man dressed as the devil, who they mistake for their master. They subsequently get into a fight with the man's wife as Sarah was dancing with him, but are scared away by the dog. Outside they find that their broomsticks have been stolen.

The witches then follow the children to the party where Max's parents are, and after being exposed to the room by Max, Winifred takes charge and ridicules him before singing 'I Put A Spell On You', therefore enchanting all the adults to dance forever. After this, the children lead the witches to the school after Allison gets an idea from a restaurant, and after unwittingly walking into the furnace, they are locked in and the children burn them alive.

However, they did not die due to the curse protecting them from death until sunrise, and they end up capturing and locking up the two bullies that make fun of Max after they incidentally call them ugly, as well as "chicks", which they find insulting. Winifred, desperate for her eternal youth, decides to try and make the potion from memory. Sarah, surprisingly, shouts out the correct ingredient, but is hushed by Mary who thinks Winifred has all the right answers. At Max's house though, Max and Allison open the book, therefore allowing it to send out a signal to the witches, who fly to the house using a modern cleaning broom, mop and vacuum cleaner as improvisations for their stolen broomsticks, take the book and kidnap Dani and Thackery. Sarah is instructed to sing her siren song to all the children of Salem so they will go to the Sanderson house.

After brewing the potion again they try to get Dani to drink it, but are stop by Max, who tricks them into thinking the sun has risen by using the headlights of a car. They soon realize they have been tricked, follow the children back to the cemetery, and attempt to get Dani to drink the potion again, though Winifred drops the potion whilst Sarah tries to help Mary escape the children. Max catches the potion and threatens to smash it, but drinks it instead after Winifred says she'll kill Dani if he smashes it. After a struggle with Max, Winifred and the boy both fall to the ground and Winifred starts to take his life force, but the sun comes up. Winifred turns to stone and explodes in green light whilst Sarah and Mary implode in purple and red light.

Sarah is very flirtatious and romantic. She loves to play with people, and hates men who reject her. She is childlike and easily distracted, to her sisters' irritation. She enjoys playing with people and uses her powers to enchant men and children. However, she is also very obedient towards her oldest sister, Winifred. Winnie is constantly irritated by Sarah's naiveté and penchant for missing the point, as well as an apparent habit of finding unusual words amusing and gleefully repeating them in a singsong voice. The movie's original script notes that Sarah "likes to torture things: small animals, children, bugs, you name it. Any suggestion of cruelty (to somebody else) sends her into a fit of idiotic, cackling laughter, while any fear for herself sends her into a fit of terrified screaming."

Sarah is thought to be the most attractive of the sisters. She has long wavy white-blonde hair, blue eyes, dark, smoky eyeshadow, wears dark red lipstick, and has a beauty mark on the right side of her chin. She wears a red laced-sleeved, low cut, dusty pink corset that emphasizes her ample bosom and a skirt composed of red and purple cloth. When outside or flying, she wears a purple cloak she also wears tan stockings that end at black garters and black lace boots.

Sarah has the power to enchant and hypnotize others with her beautiful yet eerie singing voice. She uses this ability to lure children into following her. She is a competent flyer, and can use a mop as a broomstick. She is also adept at casting spells and brewing potions, which she often did with the help of her sisters. She is the only witch beside Winifred that attacks any of the children in the movie. 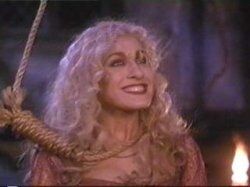 Sarah at her hanging. 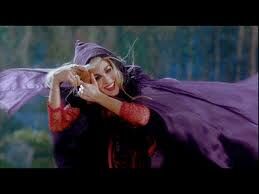 Sarah flying on her mop. 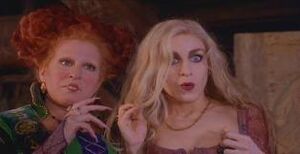 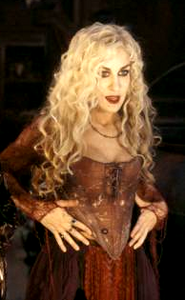 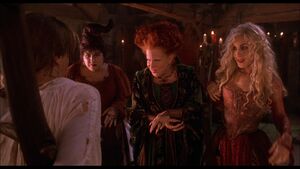 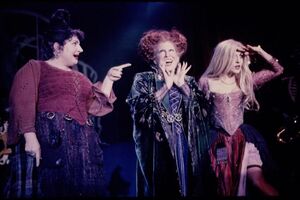 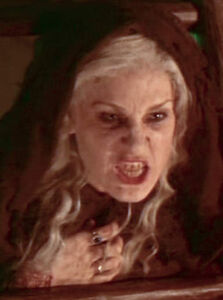 Sarah as an old woman. 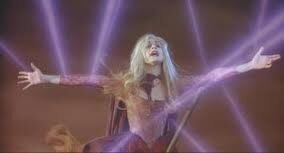 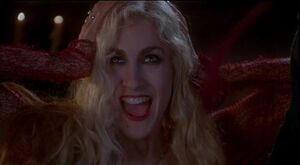 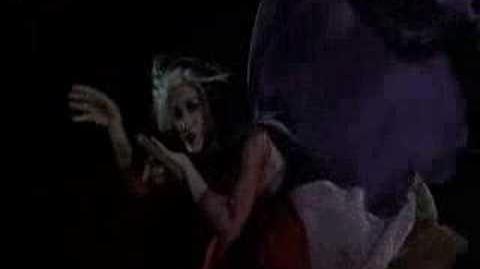