Find her twin brother Gabriel Stacy. (succeeded)
Fulfill what her and her "brother" were really created for and serve Mephisto
Kill Spider-man so Mephisto can bring him into hell (both failed)

Sarah Stacy is a minor villain in Spider-Man comics. She is the cloned "daughter" of Norman Osborn and Gwen Stacy and the twin sister of Gabriel Stacy. She serves as one of two main antagonists of the Kindred Saga of the Amazing Spider-Man comic series (alongside Gabriel Stacy).

Sarah and her brother, Gabriel, were the result of a genetic experiment created by Mendel Stromm, using the genetic DNA of Norman Osborn and Gwen Stacy. Mendel was hired by Harry Osborn to set up the experiment, as he was plotting to torture both his father, Norman and his best friend, Peter.

To ensure his plan worked, Harry hired Mysterio to brainwash and manipulate with Norman and Mary Jane's memories into thinking that Gwen had been seduced and impregnated by Norman before her death, leading to her giving birth to premature though fully grown twins while living in Europe. Harry then created an AI in the form of himself and his father, and had it raise both Sarah and her brother, manipulating them as part of Harry's plans.

After her death, Norman found and raised the twins, convincing them that Peter Parker was their father and that he had killed their mother as Spider-Man. Their upbringing made the twins want revenge. Having been born with born with powers similar to Osborn's Goblin Powers, both twins aged at an accelerated rate. Sarah quickly bore a striking resemblance to her mother, which caused confusion when Sarah was unmasked by Peter while trying to kill him.

Finding out more information about the twins from a combination of clues on a letter they used to draw him out and memories Mary Jane had of Gwen and Norman arguing while Harry was in the hospital, Peter attempted to try to convince the twins that Norman had been lying to them. Instead, the police intervened and opened fire on all of them. Sarah received a bullet wound while her brother fell into the river.

Peter took Sarah to the hospital, but her body refused all blood transfusions until Peter offered his. She learned that he was telling the truth just as her brother crashed through the hospital window and dragged Peter out to kill him.

In his weakened state, Spider-Man seemed to be no match for Sarah's brother, who before had seemed only a little unstable, but now had become insane due to a second inoculation of the Goblin Serum. Sarah was able to save Spider-Man by shooting her brother's glider and causing him to crash and contract amnesia.

In the confusion, Sarah secretly took her brother back to Paris, where she cared for him at the Osborn estate until the pressure from local drug dealers to repay a debt her brother had incurred became too much for her and she attempted suicide. Peter was called to the hospital as her emergency contact and came to Paris to help. While he was with her, Mary Jane went looking for him at the estate, and inadvertently caused Gabriel to escape in a crazed state.

After cutting a deal with Interpol to catch the dealers, Sarah joined the organization to attempt to find her brother.

Sarah Stacy displayed super strength, reflexes, healing, and endurance as well as accelerated aging all due to the inherited powers from Norman Osborn. 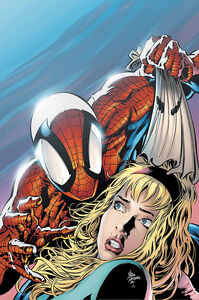 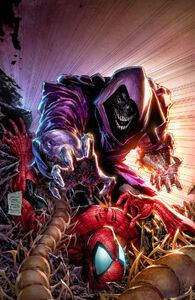 Sarah as the Kindred. 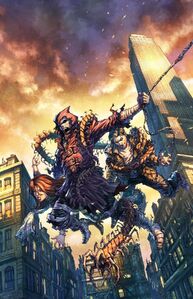