Enforce the will of Padishah Emperors.

Military Enforcers
The Sardaukar are villains of the Dune universe who serve as the elite shock troops for the Padishah Emperor, who as of 10,191 A.G. (23,352 A.D.) was Shaddam IV. Trained since childhood in brutal conditions on Salusa Secundus, those who survived the training became the fanatically loyal enforcers of the Emperor's will.

In the year 10,191 A.G. Shaddam entered into a deal with the House of Harkonnen to eliminate the House of Atreides - whose popularity was becoming a threat to not only the Emperor, but other powerful interests in the Empire, such as the Bene Gesserit and the Spacing Guild. To that end, the Emperor made Duke Leto Atreides give up his fiefdom over the planet Caladan and move to Arrakis - which was the sole location where the spice melange could be found. The Emperor then loaned Sardaukar troops to Baron Vladimir Harkonnen for their attack on Atreides. For that operation the Sardaukar dressed in Harkonnen uniforms, but it became obvious to the Atreides that it was Sardaukar instead of Harkonnen troops attacking them.

What the Emperor and Harkonnen did not plan on was the survival of Leto's son Paul and his consort Jessica. The pair were banished to the desert, where they were taken in by the Fremen natives of Arrakis. Paul rose to a position of leadership in the Fremen, and led them on a guerrilla war against the Harkonnen that all but stopped spice production on Arrakis.

During a raid against the Fremen, they killed Paul and Chani's firstborn son.

With the Guild breathing down his neck, Shaddam sent 50 legions of Sardaukar to Arrakis - which was pretty much the entirety of his Sardaukar force. It did no good, as the Sardaukar were crushed by the Fremen natives and the Emperor was captured by Paul and his Fremen allies. 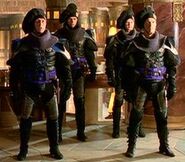 Sardaukar in the 2000 miniseries.

Sardaukar disguised as Harkonnen troops in the 2000 miniseries.

Sardaukar warriors in the novel.

ditto.
Add a photo to this gallery
Retrieved from "https://villains.fandom.com/wiki/Sardaukar?oldid=4032902"
Community content is available under CC-BY-SA unless otherwise noted.