Killing his other allies who would have betray him or been converted to good by the Golden Child and jeopardize his mission.

Kill the Golden Child and Chandler Jarrell (both failed).

Sardo Numspa is the main antagonist of the 1986 fantasy comedy film The Golden Child. A demon who is the leader of a secret Tibetan cult of devil worshippers.

He was portrayed by Charles Dance, who also played Mr. Benedict in Last Action Hero, the Master Vampire in Dracula Untold, David Carlton in Ali G Indahouse and Tywin Lannister in Game of Thrones.

In a temple in an unknown location in Tibet, a young boy with mystical abilities — the Golden Child — receives badges of station and demonstrates his power to the monks of the temple by reviving a dead bird, which is to become a constant companion. However, a band of villains led by a mysterious man called Sardo Numspa breaks into the hidden temple, slaughters the monks and takes the boy away.

Sometime afterwards, a young woman named Kee Nang watches a Los Angeles TV show in which social worker Chandler Jarrell talks about his latest case, a missing girl named Cheryll Mosley. She seeks him out the next day and informs him of the kidnapping of the Golden Child and that he is the "Chosen One" who would save the Child. Chandler does not take this seriously, even after the appearance of the astral form of the Child and his bird familiar following him everywhere he goes.

Soon Cheryll Mosley is found, dead from loss of blood, near an abandoned house smeared with Tibetan graffiti and a pot full of blood-soaked oatmeal. Kee Nang reveals to him that this house was a holding place for the Child and brings Chandler in contact with Doctor Hong, a mystic expert, and Kala (a creature half-dragon, half-woman, who remains hidden behind a screen).

Together they track down a motorcycle gang called the Yellow Dragons, which Cheryll had joined, and then the Chinese restaurant owner named Tommy Tong, a henchman of Numspa, to whom Cheryll had been "sold" for her blood, which was to be used to make the Child vulnerable to earthly harm; however, Tong is killed by Numspa as a potential traitor. Still not taking the case too seriously, Chandler is drawn by Numspa — whom Chandler begins to continuously call "Numsy" — into a controlled dream, where he receives a burn mark on his arm. Numpspa also presents his demands: the Ajanti Dagger (a mystic weapon which is capable of killing the Golden Child, since the Child refuses to eat the oatmeal) in exchange for the boy. Chandler finally agrees to help, and he and Kee Nang spend the night together.

Chandler and Kee travel to Tibet, where Chandler is apparently swindled by an old amulet seller, who later turns out to be the High Priest of the temple where the dagger is kept hidden and, subsequently, Kee's father (Chandler calls him "Monty Hall" or "Monty"). In order to obtain the blade, Chandler has to pass a test: an obstacle course in a bottomless cavern whilst carrying a glass of water without spilling even one drop. With luck and wits, Chandler recovers the blade and even manages to bring it past customs into the United States.

At their hideout, however, Numspa and his henchmen attack them. The Ajanti Dagger is lost to the villains, and Kee sacrifices her life for Chandler, taking a crossbow bolt meant for him, and dies in his arms confessing her love for him. Doctor Hong and Kala offers him hope, for as long as the sun shines upon Kee, the Child might be able to save her yet. Driven now by a personal motive, Chandler — with the help of the Child's familiar — locates Numspa's hideout, retrieves the dagger, fights past the guards with the help of Til, one of Numspa's men converted to good by the Child, and frees the boy. But when Chandler attempts to confront Numspa, the latter reveals his true face as a demon from hell. Chandler and the Child escape the hideout, only to be tracked down by the demon. After some narrow escapes, Chandler and the Child seek shelter in an old abandoned industrial warehouse, but seconds later, Sardo is back on top of them, wrecking the warehouse and fighting Chandler. When the warehouse collapses, Chandler loses the dagger, but Sardo is buried under a chunk of falling masonry, allowing Chandler and the Child to escape again and head over to Doctor Hong's shop where Kee is being kept.

As the two approach Kee's body, a badly injured but berserk Numspa appears with the dagger in his hand, but his attempt to kill Chandler with it is foiled by the amulet the Old Man had sold him, which blasts the dagger from Numspa's hand. The Child uses his magic to place the dagger back into Chandler's hands, and Chandler pierces Numspa through the heart with it, destroying him.

Sardo seems to have a sophisticated manner as he dress in a fine leather coat like a wealthy rich man. But he has somewhat a speech impediment which is why he mispronounced same names, or just Chandler's last name because he really does not like him or having trouble pronouncing the name of the Ajanti Dagger. 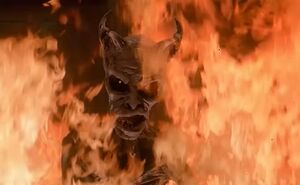 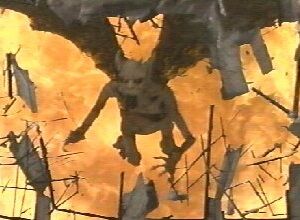 Add a photo to this gallery
Retrieved from "https://villains.fandom.com/wiki/Sardo_Numspa?oldid=3913920"
Community content is available under CC-BY-SA unless otherwise noted.