Agent of the Citadel's Special Tactics and Reconnaissance (formerly)

Leave his brother Desolas to die so he can prevent the spread of the husk infection
Destroy the refinery to help him kill his target
Frame David Anderson to prevent humanity from joining the Spectres
Attack Eden Prime and use the Prothean beacon to get information and destroy it
Kill Nihlus Kryik.
Attack Feros and get the Thorian to give him the Prothean Cipher
Create a cure for the genophage
Have Benezia T'Soni kill all the scientists on Peak 15 to keep the rachni secret
Discover the location of Ilos
Overthrow the Council and attack the Citadel (all succeeded)
Help the Council keep peace in the galaxy (succeeded, formerly)
Prevent Shepard from incriminating him
Breed an army of rachni and krogan
Convert Shepard to his cause and if he fails, kill him/her (all failed)
Help Sovereign take over the Citadel (briefly succeeded)
Regain self-control and prevent Sovereign from continuing to use him as a tool (succeeded or failed)

He was working alongside his Reaper flagship Sovereign. He was the longest serving turian member of the Spectres, the Citadel's top covert operatives, who has always been known to be very brutal and ruthless, having little regard for life, and hates humanity, thinking that they should be lower in the hierarchy of galactic society. For 24 years, he has been an agent of the Council's will, a zealous defender of galactic stability in the unsettled border region of the Skyllian Verge.

He was voiced by Fred Tatasciore, who also voiced Ka'hairal Balak and another turian named Warden Kuril in the original trilogy, Mass Effect.

Saren Arterius was born in 2139. Official records of Spectres are sealed, but it is known that Saren followed turian tradition and entered the military at the age of 15. In 2155, he was promoted to active service after only a year of training, though it is unclear whether his unit was involved in any of the battles against human forces during the First Contact War of 2157.

In 2159, he became the youngest turian ever accepted into the Spectres. Intelligent, cunning and capable, Saren quickly developed a reputation for ruthless efficiency. Although there were a number of unsettling rumors concerning the brutality of his methods, there was no denying his results.

In recent years, Saren has become an outspoken opponent of human expansion. Like many other non-humans, he believes the Systems Alliance has become overly aggressive in its efforts to establish the people of Earth as a dominant species in Citadel space. Historically, species took centuries to accomplish what humanity had achieved in less than one, and there are several species that have a "lower" standing on the Citadel compared to humanity, despite having been part of the Citadel community longer.

His speciesism is speculated to have originated in the First Contact War, when the turians attacked Shanxi. In 2165, Ambassador Anita Goyle informs David Anderson that Saren lost a brother in the war and has disliked humanity ever since. After their abortive mission together, Saren and Anderson retain a mutual dislike for each other.

Saren has little regard for life. He does not see saving lives as a priority unless the Citadel Council deems it necessary, or if there is information to be gathered. He remains the Council's top agent despite his records: Saren may be ruthless and calculating, but he gets results. He follows two principles, the first being: "Never kill anyone without a good reason" and the second: "You can always find a reason to kill someone".

Years later, Saren met Sovereign, who was a Reaper, a race of gigantic evil synthetic life forms that terrorized the galaxy millennia ago and annihilated organic life-forms. Saren started working with it hoping to overthrow the Citadel Council and also save the current life of the galaxy from the Reaper invasion; by aiding in said invasion by finding the Conduit, which would allow the Reapers to enter the galaxy through the Citadel, Saren believed that he could prove to the Reapers that organics were useful and convince them to make them subservient instead of wiping them out, reasoning that enslavement was better than annihilation.

However, after enlisting the aid of a race of artificial intelligence beings called the Geth and a powerful Asari biotic named Matriarch Benezia, Saren began a murderous killing spree across the galaxy, killing many beings he was sworn to protect. Eventually, he was informed that a Prothean beacon had emerged from Eden Prime and Saren led the Geth to invade the human colony and find the beacon to get information on the Conduit and its whereabouts, as the message the beacon contained could only be read by organics. While there, Saren encountered fellow Spectre Nihlus Kryik, who was sent to investigate the invasion. When Nihlus questioned Saren of his reason on Eden Prime, Saren assured him he had it under control and killed Nihlus when he let his guard down.

Unfortunately, Saren's plan to cover his involvement had failed as the Alliance ship SSV Normandy had responded quickly to the invasion and a veteran human N7 soldier named Commander Shepard led a ground team to not only save the colony, but also secure the beacon and discover Saren's crimes. Saren quickly left the planet on-board Sovereign, where Benezia informed Saren that Shepard made contact with the beacon, which made Saren decide to eliminate the Commander.

After Shepard and Saren's rival, Captain Anderson, reported Saren's treachery to the Council, they refused to believe Saren would do such a crime. During a hearing, Saren attended in hologram and denied murdering Nihlus. He then used his past relationship with Anderson to complicate the matters further. The Council found no evidence to convict Saren and sent Shepard to find evidence while Saren was free to escape justice. Despite multiple attempts to silence Shepard, the commander met a Quarian named Tali'Zorah nar Rayya, who had an audio file taken from a disabled Geth which proved Saren attacked Eden Prime. With the newfound evidence, the Council revoked Saren's Spectre status, but this was not enough to slow his progress.

Meanwhile, Saren attempted to exploit the Rachni by indoctrinating them into his army, and retrieving information on the Thorian, a life-form with brainwashing powers similar to the Reapers. He also created a "cure" to the Krogan genophage in order to control the Krogan. Saren believed that with the Krogan, he would be unstoppable. Saren established his headquarters on Virmire to house his Krogan breeding facility and captured Salarian soldiers to indoctrinate them.

After being pursued across many planets, Saren finally confronted Shepard in person. During a brief battle, Shepard tried to convince him that he was indoctrinated, but Saren refused to believe this. He then escaped Virmire for Ilos before Shepard caused a nuclear blast to destroy his base, at the cost of one of Shepard's teammates (Ashley Williams or Kaidan Alenko) who stayed behind to protect the nuclear device.

En route to Ilos, Sovereign implants Saren with cybernetic upgrades to 'prevent' Saren from being indoctrinated, while in actuality, ensuring that he remained its pawn. On Ilos, Saren enters an ancient Prothean tomb, with Shepard close behind him. He enters the Conduit, a miniature mass relay leading to the Citadel. There, he lets Sovereign into the Citadel while he delays Shepard. Shepard can either convince Saren that he is indoctrinated, whereupon he commits suicide, or engage Saren in combat, killing him.

However, Saren is not finished. Sovereign takes control of Saren's corpse, stripping of the turian's flesh, revealing the heavy cybernetic upgrades beneath. Shepard engages him in combat, destroying the synthetic avatar for good. As it dissolves, Sovereign loses control of its shields, giving the Alliance Navy's Arcturus fleet, including the Normandy, a chance to destroy Sovereign once and for all.

Despite the victory, Shepard acknowledges that Saren was correct that the return of the Reapers is inevitable, and vows to find a way to stop them from continuing their cycle of extinction. 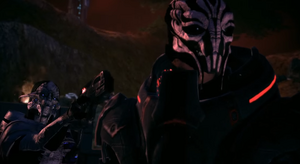 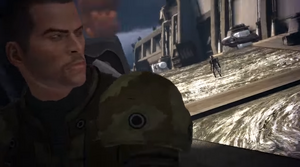 Saren and Shepard before their first fight. 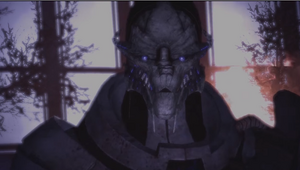 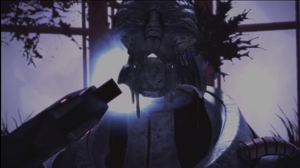