Leader of the RRTS

Kill everybody in the UAC Facility (failed).

Gunnery Sergeant Asher "Sarge" Mahonin is the main antagonist of the 2005 action/horror movie Doom, which is based on the successful video game series of the same name.

He was portrayed by former WWE wrestler Dwayne Johnson, who also played Mathayus the Scorpion King in The Mummy films, Agent 23 in Get Smart, Terrorcon Cliffjumper in Transformers: Prime and John Hartley in Red Notice.

Before his mutation, he was the sergeant of the RRTS that would search the UAC.

During the movie, he is shown to have a great sense of honor and courage. But after he and his squad unit, including John Reaper (the film's main protagonist), discover that monsters and zombies are killing people inside of the UAC, he becomes very arrogant and aggressive when he loses patience. When four of his squad members are killed, Sarge blames Dr Samantha for everything and demands to know more of what had happened before the events happened.

With not much time and believing this mission was not truly authorized, he is determined to stop the monsters by any means necessary; this leads him to become the main antagonist for the rest of the film when he orders to include the killing of any survivors who've appeared unharmed or not injured, believing them to be either infected or mutated in the process of the incident.

At this point on, everybody else begins to rebel against Sarge whilst trying to convince him that not all the people are either harmed or infected, regardless however, Sarge denies it all. This includes Pinky, who accuses Sarge for not protecting him in the arc like all soldiers should have. Sarge is about to execute Pinky without hesitation when The Kid, one of Sarge's recruit and youngest member of his team, informs him that he found a dozen of survivors that are hidden back in the lab.

This angers Sarge as he gets infuriated with The Kid for defying one of his orders. When The Kid refuses to obey Sarge's orders of killing innocent people and telling him to "Go to Hell", Sarge brutally executes The Kid in response, shocking everybody else in the process. He then gets himself in a standoff against both Reaper and Pinky when suddenly Hell Knight intervenes and kills Pinky by attacking him before dragging him away from others.

When Sarge and the others attempt to find either Pinky or Hell Knight, they are suddenly attacked by a bunch of zombies, which forces the duo to retreat in the process, while the last of his squad unit known as Duke gets perished in the process. During the zombie attack in the wall room, Sarge seemingly dies when he gets dragged away by the infected, but not after telling Reaper that he is "not supposed to die". But after the FPS scene, where Reaper kills a amount of monsters and zombies, including both Hell Knight and the mutated Pinky in an "FPS-way", he finds Sam injured but safe from harm. Just then, Sarge appears, having survived the incident but got infected in the process.

Whilst Sam flees to safety, Reaper asks Sarge what happened to the rest of the survivors that The Kid found, Sarge lies by saying "he took care of that problem", stating that he had killed them all. The two then exchange words for the final time with Reaper confronting Sarge on how he killed all the men, the woman, the children, and even The Kid, while Sarge tells him that there is a killer and that's how God paid them to become. Sarge then realizes that he will soon become one of the creatures now that Quarantine is finished, but he attempts to die in his own way. After yet again finding himself in a standoff with Reaper alone, Sarge accepts this challenge and fails to kill Reaper with a single shot of his BFG whilst taking cover from Reaper's shootings. On this occasion, Sarge engages Reaper in a one on one brawl with gunfights just before fighting him in hand to hand combat.

Sarge has no physical changes during the battle, however, his sanity was almost gone and he becomes a fully-insane person. During the final showdown, he has shown to gain superhuman speed, reflexes, durability, and strength, this allows Sarge to gain the upper hand against Reaper. But even with this immense power, this still affects his body. As Sarge pins Reaper against a wall, he begins transforming. Reaper then manages to gain an advantage when he heads butts Sarge before opening the portal which almost sends both Sarge and Reaper back to the arc.

However, Reaper manages to free himself just in time as Sarge gets teleported back to the arc, he lands on the floor, defeated. Reaper then picks out an LST Grenade and activates it just as he comments "Like The Kid said, go to hell". He then tosses the grenade back to the portal which nearly drops on Sarge who, eventually realizes his defeat too late, screams in anger just as the grenade explodes, destroying the arc and killing Sarge as well as avenging the deaths of The Kid, Dr. Carmack, and all the innocent people that Sarge massacred. 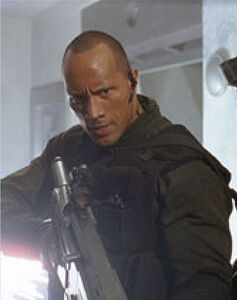 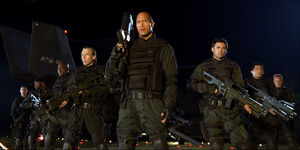 Sarge with his squad. 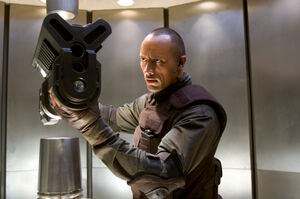 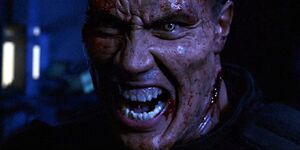 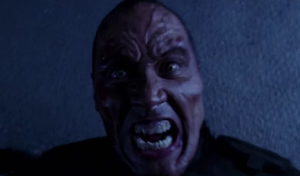 Sarge screams at the grenade before it explodes, killing him.