Leader of his mercenary crew

Enact his mission on Earth.

"Sarge" is the main antagonist of Season 6 of the TV series Marvel's Agents of S.H.I.E.L.D. He is a mercenary leader with a mission on Earth and who bears a mysterious resemblance to the late former S.H.I.E.L.D. director Phil Coulson.

He is portrayed by starring cast member Clark Gregg, who also portrayed Nat Jones in Mr. Popper’s Penguins and Chuck Muckle in Hoot.

It is currently unknown who Sarge is, where he came from or why he has resemblance to the late S.H.I.E.L.D. director Phil Coulson. So far, it is known that the name "Coulson" rings a bell for him and that both of their DNA signatures are a complete match.

According to Marcus Benson after watching a video log, wherever Sarge and his crew came from, it is speculated that they destroyed it. According to Pax, he refused to talk about his past with his team.

Sarge's subordinates, Butterfly, Jaco, and Pax, successfully made it through the portal and arrived on Earth. However, after they mourned the death of their fellow teammate, Tinker, who died due crossing an unstable portal through a concrete wall, they find that Sarge will be arriving at the same place where the Museum of Natural History was built. They then decide to blow it up so Sarge could arrive without any issues.

However, just as they were about to, S.H.I.E.L.D. interfered. Butterfly was sent to distract them while the others finished the job. After the museum was successfully blown up, the portal opened and Sarge arrived with his truck, which he used to smash through several S.H.I.E.L.D. vehicles. He jumps out and confronted Agent Fox, who had Butterfly. After the agent hesitated due to his resemblance of Coulson, Sarge coldly executed him and said he never heard of S.H.I.E.L.D. He then drove off with his crew.

In need of supplies, the four of them robbed a convenience store and took food, magazines and even a shotgun from the owner. They then returned to the truck and drove off just as it began to camouflage. After arriving at a junkyard, Sarge learns that they had no more crystals to power an energy cannon. After a brief disagreement with Pax, Jaco found a jewellery store in which they can use to find the crystals, pleasing Sarge. He and Pax then scouted the junkyard only for a security officer to spot them. Sarge then attempts to shoot him just as he and Pax disappear. Just as they set up their robbery plan, he tells Jaco to keep an eye on Pax and began considering replacing him.

He then leads Pax and Snowflake into robbing a jewellery store. After opening a portal to the truck, Sarge heads through to test the cannon with its quartz and topaz outside. However, just as he was about to, he notices the jeweller escaping and returns to find Jaco and Snowflake fighting S.H.I.E.L.D. agent Melinda May. As she says the name Coulson, it confuses Sarge just as Snowflake slides the portal underneath May and he closes it so they can escape. As they drove off, Jaco questioned Sarge about it, only for him to say that it simply rings a bell. 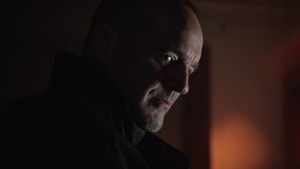 Sarge being revealed at the end of the teaser trailer. 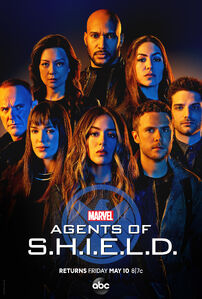 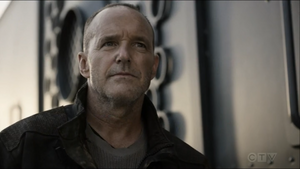 Sarge revealing himself to S.H.I.E.L.D. 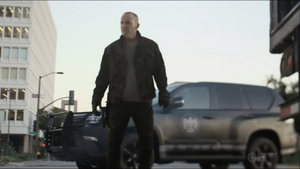 May seeing Sarge for the first time. 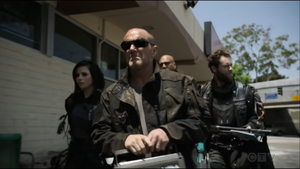 Sarge alongside his teammates. 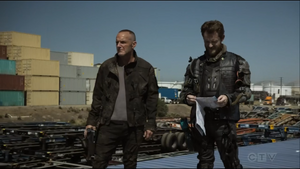 Sarge and Pax scouting the junkyard, while discussing the planet. 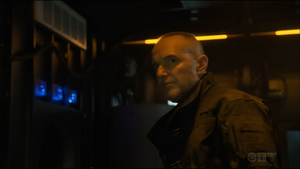 Sarge considering about replacing Pax for his recent behaviour. 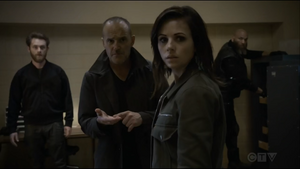 Sarge and his crew robbing the jewellery store. 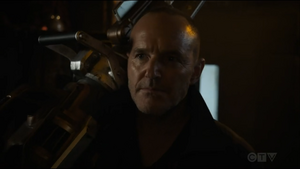 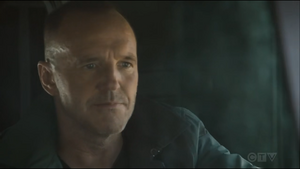 Sarge saying that the word "Coulson" rings a bell. 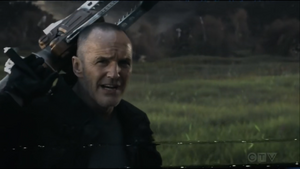 "End of the line!" - Sarge during the destruction of another planet.
Add a photo to this gallery

Retrieved from "https://villains.fandom.com/wiki/Sarge_(Marvel_Cinematic_Universe)?oldid=3124949"
Community content is available under CC-BY-SA unless otherwise noted.