Uses his Light Disc as a weapon

Grows to immense size with help of the MCP

Sark is the secondary antagonist of the 1982 film Tron. He was the right-hand man of the MCP, being a living embodiment of the MCP's will, and a ruthless tyrant who would do all in his power to prevent the hero of the story from attaining freedom.

He was portrayed by David Warner and voiced by Bruce Boxleitner.

Sark is distinguished by his cybernetic armor - which is colored red as opposed to blue - he also has great power over the virtual world and is also a very shrewd individual capable of plotting against his enemy. Sark also appears as a boss in Kingdom Hearts - alongside MCP - where he gains the ability to grow considerably in size and power via linking with the MCP.

When the MCP brought Kevin Flynn into the digital world, Sark was assigned to put Flynn in the games in hopes that he would be derezzed. At first, Sark has some objection in facing off a user, but the MCP tortured Sark into accepting his plan. However, Flynn escapes with Tron and Ram, prompting an annoyed Sark to send in reinforcements after them, though Ram ends up being derezzed by one of the MCP's tanks. Sark was then assigned to capture all renegade programs and bring them to the MCP before engaging into a disc fight against Tron.

Though Tron manages to best out on Sark during the fight by cutting out Sark's head with disc, things took a turn for the worst when the MCP revived Sark by giving him all his functions, allowing Sark to grow in size and strength. As Sark engaged into another battle with Tron, they both witnessed Flynn jumping into the MCP's communication beam, which allowed Tron to throw his disc into the MCP's core. As a result, the MCP perished and Sark derezzed along with him.

Sark and the Master Control Program are the main antagonists of Space Paranoids. Sark has been made a Heartless commander by the MCP, empowering him even more. Not much of Sark is heard of after his first appearance, where he begins to de-rez Donald and Goofy in front of Sora, and imprisons the three in the Pit Cell. Not long after their imprisonment, Sark is called up by the MCP and suggests that Tron be de-resoluted, but the MCP wants to keep Tron because the latter has access to the password of the DTD database.

His second appearance is at the boss battle against the MCP. Strangely enough, despite having met before, here Sora cannot remember Sark's name until Tron refreshes him. The normal Sark is fought, along with his Identity Disc. Weakened, he tells Tron that they could have made a great team, but Tron flings his Identity Disc at him and knocks him unconscious, as he is more or less a program, and programs can't be killed, only deleted.

Not long after, the MCP revives him and grants all his functions to him, causing him to enlarge. He is a second-hand enemy as his giant-self while you fight the MCP. Like the movie, Sark is defeated along with the MCP, being de-rezzed. He is voiced by Corey Burton 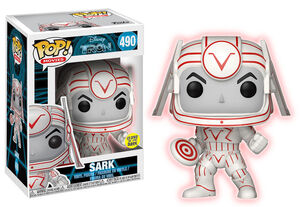 Sark's Funko Pop
Add a photo to this gallery

Retrieved from "https://villains.fandom.com/wiki/Sark?oldid=4316034"
Community content is available under CC-BY-SA unless otherwise noted.