The Hunchback of Notre Dame II

Kill Quasimodo and his friends (both failed).

He is the selfish, unscrupulous, greedy, deceitful, traitorous and narcissistic owner of the Cirque de Sarousch, a traveling circus that uses carnies to rob the spectators blind.

He was voiced by singer and actor Michael McKean, who also played Emperor Zing in American Dad! and Horace in 101 Dalmatians The Series.

Sarousch is an extravagantly vain, conniving, pompous, and scheming circus ringmaster. Despite his arrogance and egotism, Sarousch is much less cold-blooded and ruthlessly atrocious than his villainous yet contemptible predecessor Judge Claude Frollo. Regardless, he still proved to be highly greedy, selfish, deceptive, opprobrious, untrustworthy and quite avaricious for a kleptomaniac thief who is willing to commit kidnapping and murder for his goals to be fulfilled. Sarousch is completely narcissistic to a fault, as he constantly expresses no love for anything but himself - as evidently proven when he is seen admiring his reflection in the mirror and even says "I'd kiss me but then I'd fall in love", which is a homage to the Greek myth Narcissus who actually fell in love with his own reflection in the river all the time.

Sarousch takes in a beautiful young girl named Madellaine, who was caught stealing from him in the past. He is seen putting her down and rarely shows her any affection and just wants her to "stand there and look pretty" and only cared for her as long as she completed whatever he always wished for. However, he also proved to be uncaring, deceiving, traitorous, hypocritical and egomaniacal. This is proven when he gets confronted by Captain Phoebus over his plan to steal La Fidele and Sarousch places all the blame on Madellaine for his crimes - thus proving himself to be nothing more but a selfish egotist who cares for nobody but himself.

Sarousch is also shown to be very shallow, negligible and inconsequential. He only wanted Madellaine to act as a pretty face and completely ignores her talents. He also describes Quasimodo, the Bell-Ringer of Notre Dame as a "hideous monster". When the situation calls for it, Sarousch can also be quite drastic and cruel. This was first proven when Madellaine tried to stand up to herself and defy his demands to help him steal La Fidele, and in response Sarousch threatened to hurt Quasimodo unless she complied with his demands. Sarousch later took this further in the midst of attempting to make his escape with La Fidele, when he kidnapped Captain Phoebus' young son Zephyr and threatened to hurt him unless he were to escape with La Fidele.

Above all else, Sarousch proved to be nothing more than a pathetic coward after Madellaine foils his escape by rescuing Zephyr from him. He first panics when the guards apprehend him, thinking that they would hurt him. Then when he is arrested and taken to prison, he expresses fear in going to prison and pleads to be set free - going as far as to try and unsuccessfully bribe the guards in letting him so in exchange for arranging circus parties.

Years ago, when a starving street preteen girl named Madellaine attempted to steal from Sarousch and begged not be turned over to the authorities, Sarousch agreed that, in return for food and a place to stay, the girl would work as his assistant in magic acts.

One day, the Cirque de Sarouch arrives in Paris to steal La Fidele, a priceless and jewel-encrusted bell. Sarousch sends Madellaine, now a beautiful young woman, to search Notre Dame and find out which bell is La Fidele. When Madellaine returns and tells him that she does not want to go near the tower again because she met the hideous bell-ringer named Quasimodo, Sarousch blackmails her into helping by reminding her of their deal.

During the circus' first show, the performers steal jewelry and gold from the audience while they watch Sarouch's disappearing act. Sarousch then sends Madellaine once again to find out about La Fidele, which she does by going out on a date with Quasimodo into the Church of Notre Dame. During the date, Madellaine sees Quasimodo's kindness and begins to fall in love with him.

The next day, Sarousch has Madellaine take Quasimodo for a walk while he and his men steal La Fidele. When she attempts to stand strong and refuse her master, he threatens to harm Quasimodo if Madellaine does not obey.

Phoebus (who is investigating the missing jewelry and gold) comes to Sarousch's tent and finds some of the stolen goods. Sarousch lies by saying that Madellaine is responsible, claiming that she is a born thief. Phoebus is easily duped by Sarousch and leaves to go find Madellaine. Sarousch then goes with his men to the Cathedral to steal La Fidele, but unknown to him, Phoebus and Esmeralda's young son named Zephyr, and pet goat named Djali, has followed them to the Cathedral and witnesses their thievery. The duo secretly follow them onto Sarousch's boat underground.

When Sarousch discovers Zephyr and Djali, he takes Zephyr hostage. However, Djali manages to escape and runs off to go and find Esmeralda, Phoebus, Quasimodo, and Madellaine. When Djali brings them to where Sarousch is, Phoebus closes the gates to the entrance of the under-bridge and orders Sarousch to give up, but the magician shows that he has Zephyr and threatens to hurt him if Phoebus does not let him pass safely. Phoebus grudgingly opens the gate and allows Sarousch to pass, but just as Sarousch is about to escape with Zephyr, Madellaine has a little help from Quasimodo, so she manages to stop him by using her tightrope skills to rescue Zephyr while Phoebus' guards arrest Sarousch and his men for their villainous actions.

Sarousch unsuccessfully tries to talk his way out of being arrested, begging that he could perform circus acts for birthdays. However, he is ignored and sent with his men aboard a carriage to prison. It is unknown what happened to Sarousch after this, but it is completely likely that he was given a life sentence and spent the rest of his days in prison or was executed under Phoebus' orders for the kidnapping of his son. 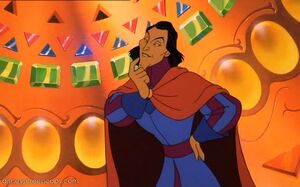 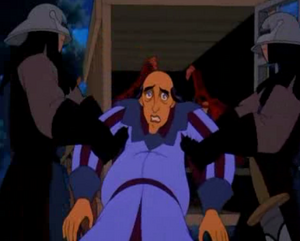 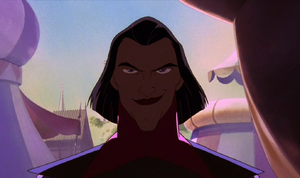