Sartoirus appeared on Duel Academia in his hopes of completing his plans. He first planned to have Jaden Yuki lose to Edo in their second duel so that Jaden would be placed under his control. However, Judai was able to resist the Light of Destruction's influence. Saiou later arrives at Duel Academy meeting Vellian Crowler and Jean-Louis Bonaparte and duels Chazz Princeton and defeats him; as a result of the defeat, Chazz joined the Society of Light.

Saatorius later finds out that Jaden is able to defy his destiny and the fortunes when he thought that Jaden would lose in a duel to Edo. The members of the Society of Light began to increase subsequently when Chazz defeated his fellow students in duels, eventually taking over the entire Obelisk Blue dorm (repainting it white and renaming it Obelisk White) and bringing Alexis Rhodes into the Society's ranks. Sartoris eventually arrived at Duel Academy and dueled Tyranno Hassleberry, interested to see the bond he shared between Aster and Jaden. Although he defeated Tyranno in a duel, he did not become a member of the Society of Light due to his dino DNA. Subsequently Saiou enrolled as a transfer student at Duel Academy, moving into the Obelisk White dorm

Saiou's sister, Mizuchi, also appeared and she talked about their troubled past and Saiou's turn to the dark side. As the Society of Light began to expand, Saiou had trouble controlling himself against the influence of the Light of Destruction. He also defeated Prince Ojin in a duel and gained access on a satellite that would help him in his plan to take over the world. He later gave Judai and Edo the keys as a way to prevent himself from carrying out his goal. He also got a hold of Alexis Rhodes and used her in an effort to get the key back from Jaden but it failed. Fed up by this loss, Sartorius ordered many members from the Society of Light to duel Jaden and anyone else who were with him.

Aster wanted to go after Saiou. But when he was about to give Saiou one of the keys to the satellite, Judai appeared and told him the truth about Saiou. He advised him on dueling him instead to get the key. However, Edo lost the duel and Saiou gained the key. Judai then duels Saiou in a final battle to save the world. As the duel went on, Saiou ordered Prince Ojin to prepare the satellite. Ultimately, Saiou lost his duel to Judai and he was released from the influence of the light. With the defeat of the Saiou, the Light of Society was disbanded and all their members were released from the Light of Destruction's control. He later thanked Judai and Edo for helping him get pass his pain and reuniting him with his sister. Saiou and his sister then left the island. 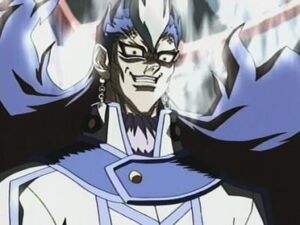 The Light of Destruction possessing Saiou,