Head of the Flower Scouts

Supervise their camp.
Make money.
Bullying at campers of the Camp Campbell.

Get approval of Miss Priss

Sasha is a snob girl leader of Flower Scouts and one main antagonists of the Rooster Teeth animated webseries CampCamp. She is obsessed with being the center of attention, to the point that when Ainsley threatens to take the spotlight away from her she hires Vera to ship her to a labor camp in Siberia.

She mocks Erin for being nerdy but is notably intelligent herself, being skilled in herbology and manipulating others. Prides herself as one, and demonstrates her abilities in the fourth season by using Pikeman's hatred of Max to push him to build an effective shelter.

While the other two flower scouts have some redeeming qualities, Sacha is a petty, obnoxious brat in all her appearances. Sasha believes that people should just give her what she wants as long as she's beautiful.

Sasha is of medium stature, fair skinned and has almond-shaped pink eyes and long salmon hair that's being held together by a dark pink headband and seems to be up in a half bun. Her nose is upturned. Like the rest of the Flower Scouts, She has a white blouse with pink trim, and a skirt patterned with three different shades of pink. She bears a purple sash over her shoulder with four badges, likely awarded to her during her time as a Flower Scout, and brown boots, presumably for outdoor activities. She is also wearing a pink blush and black eyeliner.

She has a fair bit of knowledge in herbology. She correctly guesses Pikeman landed in poison ivy, cures it with some plants nearby, and even brags about making her own anti-aging cream. Her knowledge of it even saves her, Max and Pikeman's lives when she uses the right type of leaf for an impromptu sail for the boat.

Despite the three of them allegedly being friends, she's more than willing to insult Erin's intelligence as uncool and even takes shots at Tabii's missing eye. In the fourth season, she reveals this is a tactic she consciously employs to manipulate others. 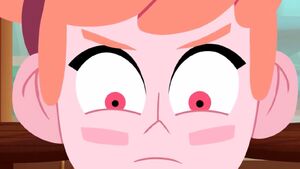 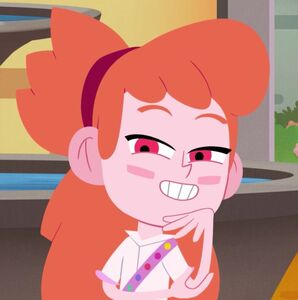 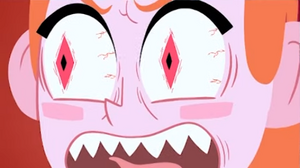 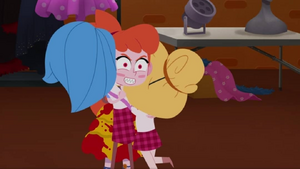 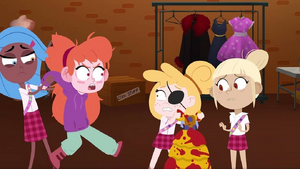 Sasha aiming a gun at the narco chief of the Mexican cartel.

Sasha as the leader of "Las Diablitas".

Sasha and her friends with the profits they obtained from the sale of their cookies by hallucinogen powder.