Piece of S**t (by Cole MacGrath)

Leader of the Reapers of Empire City's Neon District

Scientist and mentalist for the First Sons (formerly)

Make Cole her lover, or kill him.

Sasha is a supervillainess and one of two secondary antagonists of the 2009 PlayStation 3 action and adventure videogame InFamous.

She is the leader of the Reapers faction in Empire City and is one of the few people whose Conduit powers had developed before the blast. Like Kessler, she was working with the First Sons, and was a specialist researching mind-control techniques. For a time John White was assigned to work with Sasha when he was undercover within the organization. Post-Blast, she is the leader of the Reapers who dominate the Neon District, and uses her tar to infect the citizens of the city.

She was voiced by Jessica Straus, who also voiced Juri Han in the Street Fighter series, Slipstream in Transformers: War for Cybertron, Lilith in Diablo III: Reaper of Souls, Lilith in Darksiders 2.

Before becoming the tar-manipulating supervillainess, Sasha was originally a mentalist and scientist working for Kessler and the First Sons. During her time with the First Sons, Sasha began to research mind control techniques and developed a spray or gel-like substance, an early prototype of the Black Tar which produce similar but inferior effect. John White also suspected she was a "honey pot", an agent who seduces other agents to extract info from them.

Sasha eventually started a somewhat legitimate romantic relationship with Kessler himself. At times however Sasha expressed her frustration, often commenting that Kessler "isn't doing as he is told" or why he is so "different", unaware that Kessler is not like what it seemed and cannot waver from his own agenda by anything, includes her romance.

Despite her relationship with Kessler, Sasha had John White escort her out of the Historic District to the the Warren to meet an elderly man (most likely Alden Tate whom originally meant to be the leader of First Sons, but stripped by Kessler from it and left to die on streets), and ordered John not to tell anyone of this. After some time, Sasha was expelled from the First Sons after having a public argument with Kessler. Sasha ultimately physically attacked Kessler, resulting John White tasked to escorting Sasha out of the premises. Before leaving, Sasha turned back, looked at John, and said that they are all going to die by her hands. After that, she left the First Sons and descended into drugs, meeting some drug dealers that would become her first Reaper minions.

After the Empire City Blast, Sasha, who had the Conduit gene, had her Conduit abilities increased and was one of the many to begin their rise to power from there on. Now becoming a super villain with ability to produce better, dangerous mind-controlling substance called black tar from her body, she seized control of the Neon District by forming the Reapers by brought drug dealers whom she met when descended into drugs and typical criminals to her side with her newfound powers.

With more criminals that she recruit via black tar brainwash as well as had them armed with some weapons (which gained from arms dealers in black market or worse, stolen from military’s weapons cache if there’s any), the faction soon become a powerful gang and took whatever they needed through means of force.

With a troop of Reapers in her disposal, Sasha goes to have them brainwashed several citizens, be it brought them to her lair or through poisoning water supply like a plague. What made the Reapers more dangerous was aside brainwash, black tar turned out formed mental link between her and the Reapers, allowing her to communicate them telepathically.

Only Cole MacGrath whom capable to resist the tar’s influence due to his will power, though the tar has both enable her to communicate with him as well as limit how much electricity he can absorb temporarily. With this, she made her presence known to the conduit. Cole stumbled upon three fountains with black tar coming out. He turned off the valves that were allowing it to flow in. He then destroyed several trucks transporting the black tar, as well as several tar kegs that were attached to water towers.

However, as much as she hated him for foiling her plans, Sasha started claiming she loved Cole, especially showing great hatred and rage at Trish Dailey. However, Sasha continued to lead the Reapers and abduct many civilians in her daily basis.

Moya Jones then pin-pointed Sasha's lair in Jefferson Tunnel, and ordered Cole to confront her. As he fought his way for Sasha, he discovered a chamber full of kidnapped civilians that were ready to be brainwashed with tar pumps. Cole immediately freed them on Moya's orders and went deeper into Sasha's lair, and eventually confronted Sasha in her throne room. As the tubes connecting Sasha to the tar pumps were removed from her body, Sasha walked towards Cole, claiming they were "late for a party". Through this insane rambling, Sasha began to fight Cole immediately, teleporting out of sight. She said that she had laid out a tuxedo for him, and that she would serve him "dinner", made from his neighbor's bones, asking if he wanted a taste. Disgusted, Cole immediately rejected Sasha's offer and fought her.

Sasha is an evasive opponent whom uses energy blast, shockwaves, and illusive Reaper soldiers that can harm Cole as if they were actual Reaper soldiers, even able to lick him. But nevertheless, Cole gained the upper hand; ripping off the tar pumps placed on her shoulders, which severely weakened her. Defeated, Sasha demanded Cole look at her and what his powers had done. Finally, she claimed he did not control them, they controlled him. This made Cole begin to ponder whether his powers would eventually corrupt him or not as much as Sasha's. However, he decided to think about the answer later as he goes to interrogate her.

Unfortunately, soldiers in gas masks breached in, kidnapped Sasha, and blew the whole place. Water started pouring in, and the tunnel started collapsing. With no other choice, Cole continued through the tunnel, and made his way to the Warren district.

Sasha was later captured by the First Sons, and was tortured so they could break her mentally so she would work for Kessler. The First Sons had collected tar from Sasha's body, and used it produce a mind-controlling gas to scatter over Empire City, but they were destroyed by Cole. If the player has evil karma, Sasha will speak to Cole telepathically, and will encourage him to make Kessler suffer when Cole fought him.

After Kessler's death, Sasha escaped from the First Sons' facility, but was captured by Moya Jones and DARPA, and Jones weaponized the black tar and capture Cole. The gas confused Cole, as he saw a hallucination of an angry Trish, who blamed him for her death. Afterward, Sasha broke out of confinement, and rescued Cole from his restraints, declaring her love for him.

Sasha ordered Cole to leave the aircraft carrier as she gave him cover, and fought Moya until her soldiers arrived. Sasha decided to leave, and escaped into Steel Harbor after breaking through an aircraft hull. Though Sasha failed to directly kill Moya, the latter would die from drowning when Cole defeated Dave Warner. 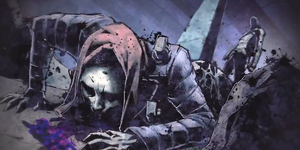 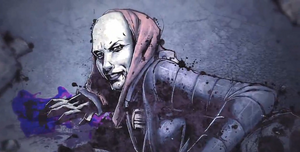 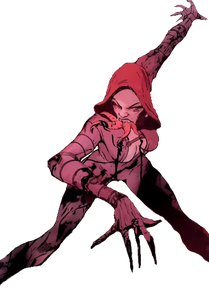 Sasha in the comic.