Sasha Banks is a WWE superstar currently signed to their smackdown Brand where she is a former 6 time raw womens champion, one time nxt womens champion and one time tag team champion alongside her partner Bayley

Sasha debuted in January 2013, but within months, she was pressured by Summer Rae to "get it together" after Sasha confronted Summer over the way she had been bullying Emma. After being told by Summer to make a name for herself in her match against Paige, Sasha competed in a losing effort to the then-reigning NXT Women's Champion. After the match ended, Sasha made her villainous transformation by attacking Paige in the ring, and left the ring contented and proud of her actions.

After her heel turn, the evil Sasha debuted a new blinged-up look and referred to herself as "The BOSS of NXT." She served mostly as Summer Rae's partner in crime as they feuded with Divas such as Paige, Emma, and Bayley, with the duo referring to themselves as the Beautiful Fierce Females, or "BFFs" for short. The duo became a trio when Charlotte Flair became a villainess and turned against Bayley during a tag team match against Sasha and Summer.

Since Summer Rae was called up to WWE's main roster, Sasha mostly served as a villainous henchwoman of sorts to Charlotte. However, once the BFFs split up, Sasha became jealous of Charlotte's success and even decided to attack Bayley after Charlotte defeated her to retain her title. Sasha continued to bully Bayley after the event, and even managed to talk Becky Lynch into aligning with her.

since sasha's debut to the main roster she joined team bad with current members naomi and tamina until she finally turned face in 2016 unti 2019's wrestlemania 35 where she left for four months and returned as a heel with new blue hair and attacked her friend natalya and becky lynch then in the superstar drafts she was drafted to smackdown live where she partnered with her former friend bayley who is now also a heel and helped her to dominate the womens division on april 5th she had a fatal 4 way elimination match at wrestlemania 36 against tamina,bayley,lacey evans and naomi which she lost after arguing with bayley and getting a womens rights to the face and got pinned for the elimination.

she became bayleys lackey and sidekick when she joined the smackdown womens division until just before money in the bank where bayley sold her to tamina for a title match if tamina won which sasha didn't protest against bayley then on the ,may 15th episode she was seen confronting charlotte flair with bayley who charlotte asked sasha if she wanted to be an afterthought and bayleys lackey but bayley didn't let sasha speak and sasha gave a sad face most probably realising that charlotte is right this could be leading to a summerslam match against bayley.

As a villainess, Sasha is arrogant, cocky, and acts as a bully to the other Superstars. She also loves to stand out, hence her blinged-up attire. 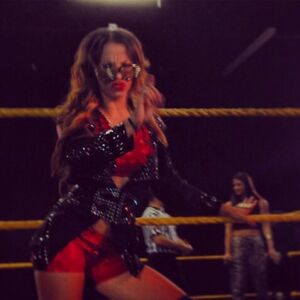 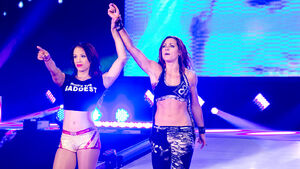 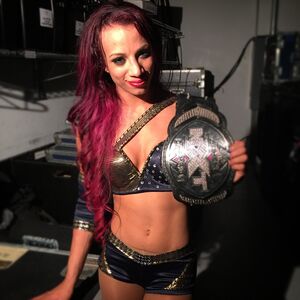 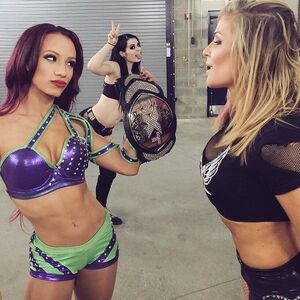 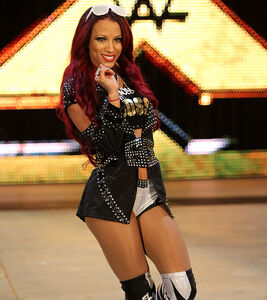 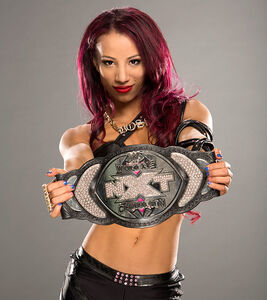 Add a photo to this gallery
Retrieved from "https://villains.fandom.com/wiki/Sasha_Banks?oldid=3752526"
Community content is available under CC-BY-SA unless otherwise noted.