Scheming and helping Grime to take over Amphibia.

Bullying and manipulating others (both formerly).
Hanging out with her friends.
Cheerleading.

Find and reunite with her friends (succeeded).
Help Captain Grime maintain control over Frog Valley (failed).
Overthrow King Andrias and become ruler of Amphibia.
Get revenge on Anne for standing up to her (both formerly).
Liberate Amphibia from King Andrias and stop his multiverse invasion.
Become a better person and make up with Anne and Marcy for her past mistakes.
Free Marcy from The Core's control.
Stop The Core from destroying Amphibia (all succeeded).

NOTE: This page is about Sasha's villainous role in first two seasons. Click here to see her role in whole series.

Sasha Waybright is a major antagonist-turned-major protagonist of the 2019 Disney animated series Amphibia.

She is a student at Saint James Middle School and the childhood friend of Anne Boonechuy and Marcy Wu, often using her skill at manipulation to control and influence their behavior. After she and her friends were teleported to the titular land, she would become the lieutenant of the Toad Army, and Anne's archenemy. However, after realizing the threat posed by King Andrias and her past mistreatment of her friends, she would redeem herself and lead the Wartwood Resistance against Andrias and his army.

She was voiced by Anna Akana in her first villainous role.

Sasha is a charismatic and persuasive girl who is somewhat of a rule-breaker to boot, as she eagerly encouraged Anne to steal the music box. Although she comes off as manipulative and selfish, she is not without a caring side, having promised to herself that she will find her friends who also got stuck in Amphibia and take them back home, as well as persuading Grime to be more affectionate for his soldiers.

Sasha made her debut at the end of the episode "Best Fronds". She can be seen with Captain Grime thinking about finding another human in Amphibia.

In "Prison Break", after Sasha has talked several of the toad soldiers into abandoning their jobs, to Grime's chagrin, Sasha convinces him that being kinder to his subordinates may help get them in order, which proves to be correct. When a couple of giant herons attack the Toad Tower, Grime ordered his army to fight, but they were too weak to fight back. Seeing that Sasha can fight, the toad leader used her help to fight the herons. Sasha advised him to be friendlier to his army, which gained him an advantage. After the battle, Captain Grime offered Sasha one final mercy, which leaving his castle to find her friends or joining the toad army. She chose the latter, and he told her to meet him in the castle.

At the end of the episode "Anne of the Year", she and Anne meet again.

Sasha returned in "Reunion" to invite the frogs to have a party with the toads. When Sasha revealed that the party was a trap to execute Hopadiah, who has become a figure of rebellion, Anne tried to help the frogs escape, but all of them were surrounded by the toads. Grime asked for a duel between Anne and Sasha, which results in Sasha being defeated, but after the boom shrooms exploded, the tower collapsed. Sasha was about to fall until Anne had caught her just in time.

Knowing Anne and the Plantar family could not hold her weight, Sasha remorsefully said to Anne with parting words and tears in her eyes, "maybe you're better off without me", and willingly let go to fall to her death. Luckily, Grime would catch her before she reached the ground, after which he looked at Anne angrily and escaped with the unconscious Sasha and his toad army to an unknown location.

In "Toadcatcher", Sasha is shown to be training hard to face Anne and the Plantars. She tries to get Grime to train, but he has become lazy since his army disbanded, to the point where she even tried to get Percy and Braddock to attack him. When General Yunan arrives to kill Grime, he and Sasha run through the forest where Grime reveals to her that the reason Sasha has been training was because she lost Anne, which she admits is true, and has been trying hard to protect the one friend she has left, which is Grime. After facing General Yunnan and tricking her into a trap, Sasha and Grime then decide to conquer the capital, Newtopia. Sasha then vows to find Anne, claiming they are not over yet.

In "Barrel's Warhammer", Sasha learned that Anne and Marcy had joined forces, being hurt by this because she felt they moved on without her. In order for her to gain the support of the other toad armies for their rebellion, they had to retrieve the legendary warhammer of Barrel the Brave from the beast that guarded the weapon. Sasha had befriended the two during her time at Toad Tower, and were the only ones who besides Grime who joined her after they fled from Frog Valley. However, she was willing to put them in danger to achieve her goal, causing both to leave her and filling Sasha with remorse.

She would encounter Anne again in "The Third Temple", where Sasha apologizes to Anne in an effort to use her and Marcy to get into Newtopia for Grime's invasion plan. After the temple's trial had ended, a skeptical Anne finally accepts Sasha's apology. Even though her ruse worked, Sasha is shown to have true remorse for her deception towards Anne, especially when she encouraged her to not give up in the third temple. Also, Sasha seems to be enjoying her time with Anne and truly sees how much she changed as a person, although she understands that she still the same person she came to know. In "Battle of the Bands", Sasha starts to feel more comfortable with Anne making her own decisions.

In "True Colors", Sasha and Grime put their hoods up as the gang arrived in Newtopia due to Grime's criminal status, and Marcy swore to persuade the Monarch of Amphibia to pardon them. Sasha and Grime made their move and snatched the music box just as Anne was ready to pass it over to King Andrias. Andrias reminded Sasha that the music box was her only ticket home, but Sasha replied that she doesn't want to go home when she can lead an actual kingdom instead of some middle school. Grime was able to incapacitate the gigantic newt king with Barrel's Warhammer while Andrias was busy with Sasha. The city gates were now open for the remainder of the toad army that would arrive within the hour, with Andrias now being locked up and the concealed toad troops were wreaking havoc. Sasha continued to remain friendly with Anne and Marcy, even inviting them to join her, but Anne declined, calling her a horrible person and declaring that she was no longer friends with her. Sasha tried to send Anne back to Earth to be separated from her surrogate frog family forever, but she couldn't make the box function, so she ordered the guards to put Anne, Marcy, the Planters, Lady Olivia, and Frobo to the dungeon until she could.

Grime gifted her a second blade to duel wield when they were hanging out in the royal chamber. Sasha was ecstatic, but when she saw herself in the blade, she was heartbroken. She began to question whether Anne was correct about her, and she no longer knows what she wants. Grime tried to cheer her up by assisting her in redecorating the castle, but when they tore down a tapestry, they discovered a mural behind it depicting the king utilizing the box for destructive reasons, causing Sasha and Grime to realize that Andrias may not be the kind ruler he seemed to be.

Sasha tries to warn Anne about Andrias, and stop her from closing the gate to the toads, but fed up with her constant manipulation, Anne refuses to listen. They engage in a duel, where Anne emerges victorious due to Sasha holding back, foiling the toad invasion. As Sasha and Grime are held prisoner before Andrias, with her warnings once again ignored, he reveals the truth about the box and his intentions for conquest, making Anne realize she was right. Andrias then destroys toad tower and reveals the truth that Marcy brought them to Amphibia intentionally, leaving Sasha highly distraught and repulsed.

Anne frees Sasha from her bindings, with the rest of the group they fight back against the king's robots, before watching in shock as Anne transforms into powerful mode by watching Sprig dropped out of the flying castle's window. After Anne's power wears off, Sasha tells her to run to the portal back home Marcy opened with the box, but Sasha is then knocked away by Andrias' tail before he impales Marcy.

Sasha watches in shock at Marcy being stabbed, before her and Grime are cornered by Andrias' robots. Grime throws her, then himself, out the castle window, where they are caught by Joe Sparrow. With the rest of the Toad Army arrested, the two hide in Wartwood, telling the residents about Andrias before claiming Anne sent them to protect the town. Sasha tales shelter in the Plantars' barn, where the kindness of the townsfolk makes Sasha feel guilty for her actions. A robot attacks and they defeat it, but it sends a signal for backup, causing Grime to suggest they slip town, but Sasha refuses entering the house to finds Anne's journal, reading how happy Anne was with Sasha's false redemption. This causes Sasha to realize her wrong-doing and resolve to truly redeem herself. Sasha tells the townspeople the truth before a Suriname toad robot attacks. The Wartwood residents help fight the robot's smaller spawn, while Sasha and Grime destroy the main machine with its own missiles. After this, Sasha declares that as the town's accepted new defender, she will lead Wartwood to fight back against Andrias' forces. 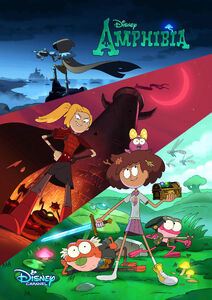 Sasha on the Season 2 poster. 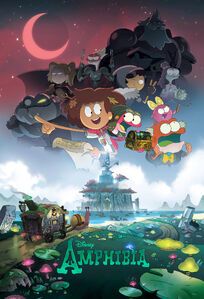 Sasha on the second poster for Season 2. 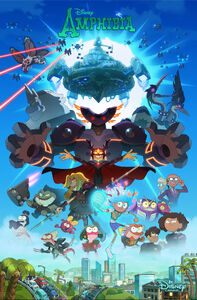 Sasha on the poster for "All In". 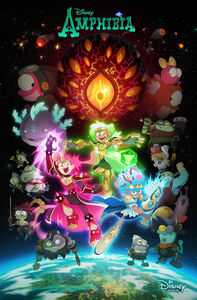 Sasha on the poster of the series finale, "The Hardest Thing".