Be with Shio forever.

Keep Shio far away from Asahi.

Satō Matsuzaka is the protagonist of the 2015 psychological horror manga Happy Sugar Life and its 2018 anime adaptation.

She was voiced by Kana Hanazawa.

Sometime in her life, she lost both her parents at a young age and was made to live with her aunt. However, Sato's aunt was mentally unfit to raise her due to constantly going out of her way to sleep around with several men. When Sato tried some candy in a jar, she passes out because of there being poison inside of one of the pieces of candy. Her aunt was a person with a warped idea on what love was in that she actively encouraged herself getting beaten or mistreated out of masochism. Her twisted sense of love would eventually become the basis for what Sato thought was love.

Satō is a high schooler known for being "easy", once admitting to have been with millions of boys, only changing partners every 72 hours. This all changed when she discovered Shio Kobe, a young girl who was seemingly left by herself. Becoming enamored by her, Satō kidnaps her, believing that it was under the impression that she had fallen in love with the young girl. After meeting the girl, one of Sato's boyfriends attacked Shio and attempted to strangle her to her death. Thinking quickly, Sato grabs his easel and murders him. She then chops up his body and places it in three bags she kept locked away in the pantry room.

Gradually, Satō decided to work harder in order to support her and Shio. After one job she had for a short time, Satō learns about a restaurant known as the Princess Imperal, and decides to work there. While there, Mitsuboshi (a young man who works as a waiter for the restaurant) asks Satō out for a date only to be turned down. From there, it appeared as though Mitsuboshi quit the restaurant out of despair of having been rejected. When the employees get their checks, Satō notices that her check was short despite working more hours for the restaurant. While conversing with her, Satō notices her cabinet, realizing that Mitsuboshi was actually trapped in the cabinet. The manager explains to her that she had kidnapped Mitsuboshi because she overheard him say that he loved Satō instead of her. Enraged by this, she kidnapped Mitsuboshi, forcefully molesting him as her way of making him love her. Unfortunately for her, Satō filmed her confession on her phone, and suggests that she leak the footage to the public lest she be given her due. She opens the door to the cabinet and looks at the bound Mitsuboshi with pity before leaving.

Shortly afterward, Sato returns to her high school where she is confronted by her teacher Daichi Kitaumekawa. After this, she discovers that he was following her and so leads him into an alleyway. When Daichi was trying to make advances on her, Sato activates her safety alarm, alerting residents and scaring her teacher off. The next day, she forces her teacher onto the ground and stomps on his crotch, manipulating him into helping her get rid of the garbage bags from the pantry under the threat of destroying his livelihood. Sato returns to her original job where she runs into Mitsuboshi. After he saves Asahi from getting savagely beaten up by thugs, Asahi is taken to the back to recuperate. Alone with the young boy, Sato realizes that Asahi had connections with Shio when she overhears him reciting the "wedding" oath to himself. Fearing the worst, Sato grabs a crowbar and approaches him.

Later on in the manga, Satō's friend, Shouko Hida finds Shio and takes a picture of her with her phone. Despite offering to hand over the phone to her, Satō slits her throat out of fear that she might go to the authorities about what she had discovered. However, unbeknownst to her, Shouko had managed to send the photo to Asahi prior. As Shouko was the only link that Satō had with the outside world, Satō became more unhinged. Realizing that her cover could potentially get blown, Sato convinces Shio to run away with her to some other location, hopefully a tropical island. The two then decide to actually become married, and Sato buys rings for her and Shio.

After forging a pseudo wedding with Shio, Satou goes to her aunt's and informs her about what she had done, and that she felt entitled for her aunt to assist her in her getaway because of her being "poisoned" by her aunt's feelings on love. The plan is to gather several containers of gasoline, and set the room on fire. Satou would pass off Shouko's body as her own, ergo faking her death. She dresses the corpse in her clothes, and mentally removes Shouko from her mind, destroying any lingering remorse that remained. She then tosses Shouko's phone on a moving truck.

As the manga isn't near its completion yet, it is likely that Satou's end will be different. In the anime version, Satou tasks her aunt with burning the apartment building to the ground as a means of covering her tracks. Just when Satou was about to escape with Shio, she realizes that she left her ring at the apartment. While searching for it, the two are confronted by Asahi who is surprised to hear Shio proclaim that she was going to stay with Satou even when Asahi gave her the facts about what happened on the day their mother abandoned her in the streets. With no way off the roof, Shio and Satou opt to jump. As the two were plummeting, Satou shields Shio with her body and takes on the full blow, dying instantly.

A few days after the destruction of the apartment, Asahi goes to visit his sister in the hospital. Shio at first acts dismissively at her brother, and happily calls her hospital room her "happy sugar life" whilst happily reminiscing her time with Satou. 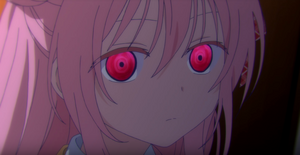 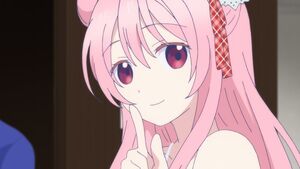 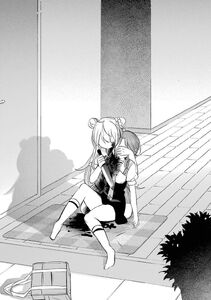 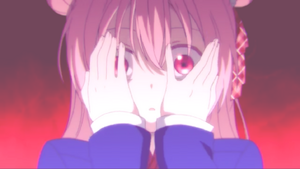 Sato having a breakdown. 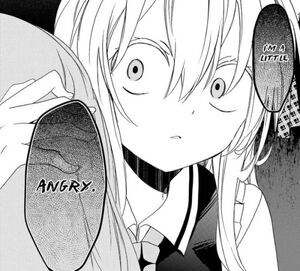 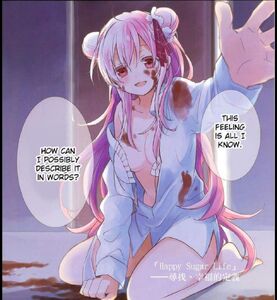 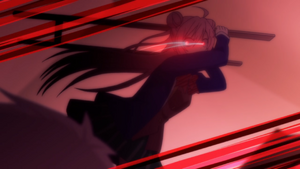 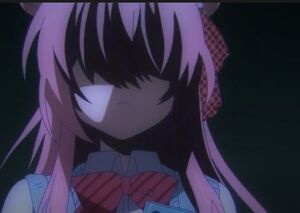 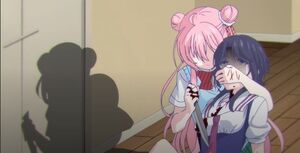 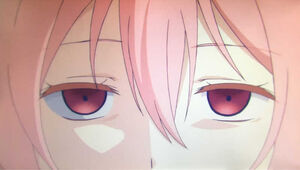 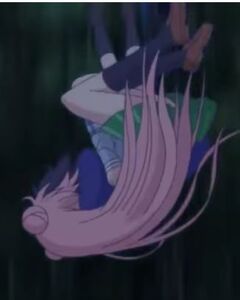 Satou shielding Shio with her body. 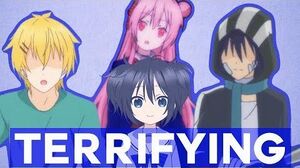 Satou Kissed That Girl?! 😯
Add a photo to this gallery

Retrieved from "https://villains.fandom.com/wiki/Sat%C5%8D_Matsuzaka?oldid=3883844"
Community content is available under CC-BY-SA unless otherwise noted.