Manipulate Zobek into separating Earth from the Heavens.
Return back to Earth with the help of the Acolytes.
Assume control over Trevor's body.
Regain his power (all succeeded).
Take revenge on God and return to Heaven to rule.
Destroy Earth.
Kill Gabriel Belmont/Dracula (all failed).

Satan (also called Lucifer) is the main antagonist of the Castlevania: Lords of Shadow series.

He is one of the first archangels, the first sons of God, and once, the most beloved of all of them, before betraying his father because of his own lust for power and trying to kill him in order to usurp the throne of Heaven, causing him to be defeated and cast away, turning extremely vengeful and ending up planning to return and exact his vengeance.

Satan is one of the two arch-enemies of Gabriel Belmont/Dracula and also the arch-enemy of Trevor Belmont/Alucard.

In the English version of both games, he was voiced by Jason Isaacs, who also played Colonel Mekum in Soldier, William Tavington in The Patriot, Lucius Malfoy and the Basilisk in the Harry Potter film franchise, Captain James Hook in the 2003 Peter Pan film, Zhao in Avatar: The Last Airbender, Ra's al Ghul in Batman: Under the Red Hood, The Grand Inquisitor in Star Wars Rebels, Dr. Heinreich Volmer in A Cure for Wellness, Dracula in Monster Family, Gabriel Lorca in Star Trek: Discovery, SkekSo in The Dark Crystal: Age of Resistance and Dick Dastardly in Scoob!. In the Japanese versions, he was voiced by Tomokazu Sugita.

Satan was condemned to Hell after he betrayed God and attempted to become His equal and usurp the throne of Heaven. However, he found a means of revenge when Zobek began searching Hell to find a way to assemble the God Mask, and he granted Zobek great knowledge and power, and also planted the idea of an elaborate plan that would play to the fallen archangel's own goals in his head; thus, Satan was behind Zobek manipulating Gabriel Belmont into obtaining the pieces of the God Mask by defeating the Lords of Shadow.

After Gabriel obtained the last piece of the mask, Zobek revealed his manipulations and that he was the last Lord of Shadow, the Lord of Necromancers. Satan then appeared and incinerated Zobek, taking the God Mask from him, and told Gabriel that he'd been the being that granted the Lord of Necromancers power and knowledge, revealing that he was behind everything from the very beginning so as to return to Heaven and overthrow God.

Satan offered Gabriel a place at his side, trying to convince him that they were alike. However, Gabriel refused, and so they engaged each other in battle. Despite possessing great power and succeeding in gravely injuring Gabriel, Satan was defeated. As Gabriel held Satan in a choke-hold, Satan tried to convince him that God had forsaken him, only to be ignored. He then proceeded to taunt Gabriel, saying he would introduce Marie (Gabriel's wife) to such pleasures in Hell, but Gabriel replied that her soul would go to Heaven, causing Satan to laugh before he was finished off by Gabriel; this broke the spell holding the deceased souls on Earth.

However, many centuries later, Zobek went to visit Gabriel, now known as Dracula, and told him that Satan's Acolytes were preparing for his imminent return, saying that they had to stop him or he would have revenge on both of them.

With Dracula believed to be dead, Satan's Acolytes began preparing for their unholy father's return; this caused Zobek to panic and find Dracula, who had been re-awakened after Alucard removed the Crissagrim from his father's heart. When he regained his powers, Dracula killed Raisa Volkova and Nergal Meslamstea, prompting the third acolyte Guido Szandor to summon Satan.

After Alucard restored Dracula's memories, the two vampires allowed Guido to proceed so Dracula could exact revenge on both Satan and Zobek. Speaking in ancient Enoquian, Satan told Guido to summon him at the cathedral where Zobek first found Dracula. Later, when Dracula and Alucard arrived at the cathedral, Guido finished the ritual and Satan was summoned to Earth.

Guido bowed down before his "father", but Satan dug his fingers into Guido's throat and ripped off his face out of anger for his children's failure to kill Dracula. Satan then offered to share the world with Dracula, but knew that Dracula desired to kill him, so he expressed his desire to destroy the world and summoned a Leviathan to fly up and destroy the whole Earth. However, before the Leviathan could fire his fireball at the world, Dracula and Alucard pulled on the monster's chains, severing its head and causing it to swallow its own fireball, causing it to explode.

Out of desperation, Satan possessed Alucard, and he and Dracula engaged one another in a final battle on Leviathan's remains, with Satan taunting Dracula that his son was feeling pain, not him. Finally, they fell to the ground in Castlevania City. As Dracula prepared to kill Satan with the Vampire Killer, Satan said that his feelings would betray him and that he wouldn't kill his son to destroy him. Dracula, however, replied that Satan didn't know him and looked like he was going to kill his possessed son; this prompted Satan to vacate Alucard's body, allowing Dracula to catch him and stab him in the heart with the Vampire Killer, with Dracula telling him that he was wrong about him before he died once and for all.

Satan can also fly and generate darkness around him, and possesses great strength, along with some sort of telekinetic ability seen when he reconstructed the ground he crashed into and summoned his staff back to him with his mind. 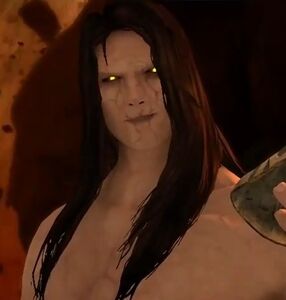 Satan in Castlevania: Lords of Shadow. 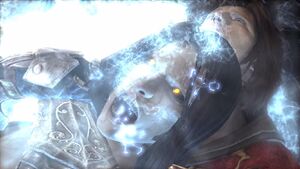 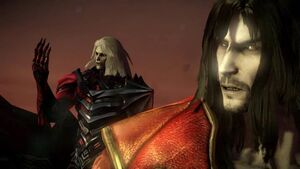 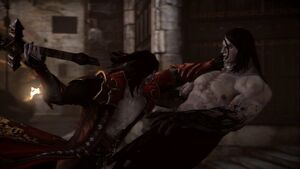 Satan's moments before his death.