Wreaking havoc and destruction.
Killing and torturing others.

Take Christine York to be his bride forever.
Father the Antichrist before the end of 1999 at midnight and to destroy Earth (all failed).

Satan (also known as the Dark Angel or The Man) is the main antagonist of the 1999 action/horror film End of Days. He is a demonic fallen angel and the mighty king of Hell.

He was portrayed by Gabriel Byrne, who also played Erich Kaempffer in The Keep, and Marcus Duvall in Assault on Precinct 13.

Satan was originally one of the highest and strongest angels of God named Lucifer, but he apparently turned on God and was banished by the Archangel Michael from Heaven for eternity, becoming a vicious and vastly powerful demonic creature. Throughout human history, Satan has existed to corrupt humanity into doing his will until he was imprisoned in Hell circa 999 A.D. for a thousand years.

A young woman named Christine York was born in New York on the night of the temporary celestial alignment called the "Eye of God" (which is known as "Finis Dierum" in Latin and "Oculus Deum" in Italian) in 1979, and she was predestined to be the mother of Satan's child; Satan consummating with Christine and conceiving his child would open the gates of Hell and bring about the End of Days. A Wall Street banker was implied to have been predestined to be Satan's vessel through which to father his child with Christine (analogously to how Christine was predestined to mother Satan's child according to the stars). Over time, Christine was looked after by Satan's disciples, being brought up with a good education and everything.

In the final days of 1999, when Christine was 20, with the thousand years of Satan's imprisonment up, he was released from Hell to father his child with Christine and bring about the End of Days. After arriving on Earth, Satan possessed the chosen Wall Street banker's body as his vessel in a restaurant restroom. After exiting the bathroom, he kissed and fondled the wife of an acquaintance of his host. Shortly after he left, the restaurant exploded, leaving him as the sole survivor.

Satan later hired a security firm to protect his host from harm by priests' and the Church's efforts to stop Satan from bringing about the End of Days. The man in charge of his security was a former NYPD officer and morally broke-down man named Jericho Cane. While he was leaving his limo, Satan was the target of an attempted assassination of a Vatican priest named Thomas Aquinas who knew he was evil. Jericho hunted him down just as Satan was taken to safety.

The Temptation of Jericho Cane

Later, Satan arrived at Jericho's home; by this time, Jericho knew the man was possessed by Satan. He would show Jericho a mystical simulation of his family being slaughtered by criminals. Satan, recognizing Jericho's rage and thirst for vengeance, tried to coerce and turn Jericho over to his cause in defeating God and bringing about Satan's kingdom on Earth.

When Jericho persistently refused, Satan attempted to drop him out of a window to try and frighten Jericho into accepting his offer over death.

Jericho tricked Satan by using the latter's own arrogance against him and pulled him out of the window, causing him to fall out of the window instead. However, Satan survived the fall and his vessel quickly healed.

Satan killed Jericho's partner Bobby Chicago and made a deal with him while he was burning; Chicago agreed to help Satan and tricked Jericho to give him Christine while Satan and his followers beat up and crucified Jericho in an alley after he and Christine escaped from a St. John's Church when Satan begun his assault there upon everyone there, including a Cardinal and his Vatican Knights. A few others, including Father Kovak, survived the attack and helped Jericho recover.

The next night was Friday, New Year's Eve, the one night when Satan could conceive his child with Christine and start the End of Days. Jericho broke into the dark and hidden, Satanic chapel where members of Satanic cults gathered to witness the unholy union, and took back Christine.

Chicago was told to kill Jericho and take back Christine; but thanks to Jericho telling him that he is better than this and better than Satan, he refused.

Satan would then call their deal off and burned Chicago alive just before Jericho shot him and ran with Christine. Satan hunted Christine and Jericho down to a subway train, which he ripped through to pull Jericho or Christine out. Jericho stopped Satan by shooting him with a grenade launcher, ripping apart Satan's host body and damaging it beyond repair (even for his unlimited magic powers).

Satan subsequently left his now-crippled and useless original vessel to find another host body. He tracked down both Jericho and Christine to a church just as Jericho dropped his gun and prayed to God for help. Satan emerged within the church in his true form, which is the symbolic manifestation "The Beast" (that of a giant, horrific, demonic flying creature with huge wings, tentacles for lower limbs, and his abdominal chest filled with tortured souls of the damned), and violently invaded Jericho's body and forcefully possessed him.

Now using Jericho as a vessel, Satan tried to rape Christine in a last-ditch effort to conceive his child in time to bring about the End of Days, but Jericho's will, at least briefly, proved too strong.

Jericho managed to take control of his body back from Satan, and then impaled himself on a statue of the Archangel Michael's sword, which expelled Satan's essence for Jericho's body due to the Michael Sword's holy power against him.

As it was already past midnight by this point, with Satan having failed to conceive his child with Christine in time, the End of Days was averted and Satan was pulled back to Hell to be imprisoned for the next millennium.

For Christine, however, the earth was saved at a terrible cost, as Jericho was mortally wounded and dying from his injuries, but was happy because he can finally reunite his family. 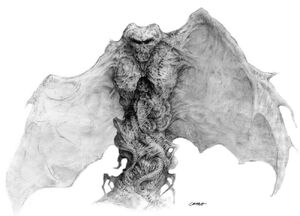 A concept art of Satan in his demonic true form. 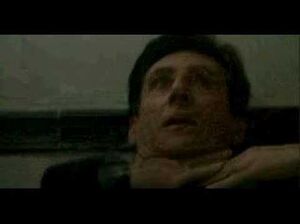 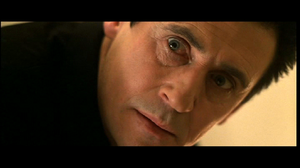 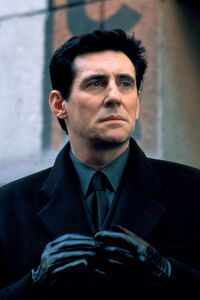 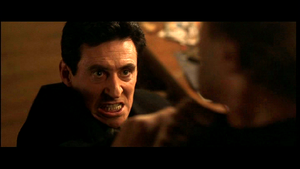 Satan rips a man's heart out.

Satan about to kiss Christine. 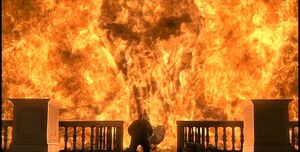 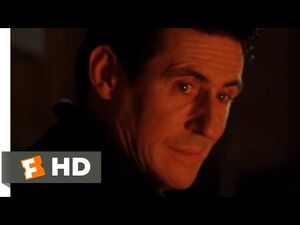 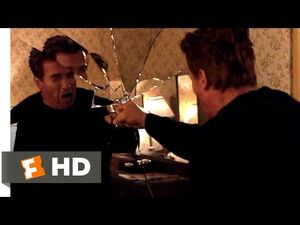 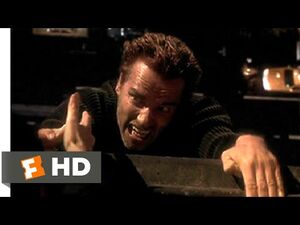 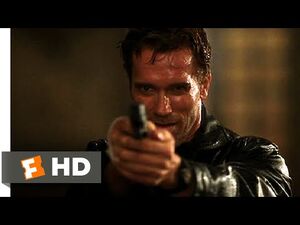 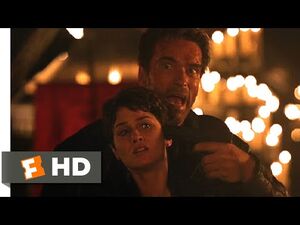 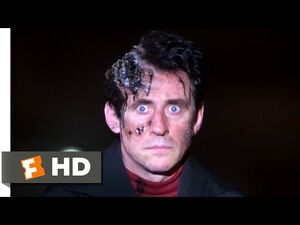 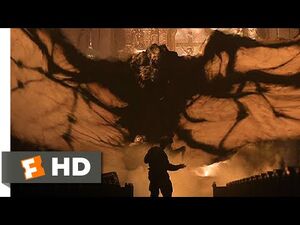 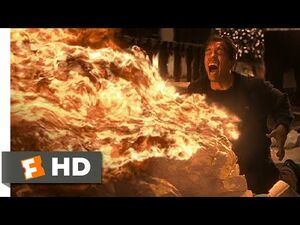