Satan is a semi-recurring antagonist in Family Guy. He is a demon who rules over Hell. Every time an evil person dies, they get rejected from Heaven and sent to Hell, where they're tortured by Satan.

He was voiced by Seth McFarlane in "A Picture's Worth $1000", John Viener in "Dial Meg for Murder", and Alec Sulkin in "High School English".

In "A Picture's Worth $1000", Peter Griffin says that he'd sell his soul to the devil to be famous. Meanwhile, down in Hell, Satan gets a fax, telling him that Peter just put up his soul for sale. Satan tries to get it but one of his workers tells him that Peter already sold his soul to someone else back in 1976 for Beegees tickets and again in 1981 for half a Mallomar. Satan damns this and says that he'll get that soul yet, and all he needs is the help of a lawyer. Luckily for him, a whole array of hellions surrounding him just so happen to be lawyers.

In "Peter's Daughter", Brian Griffin was told that he'd be going to doggy hell for blowing up a house, cueing a cutaway to Satan, torturing dogs in Hell by scaring them with a vacuum cleaner.

In "Dial Meg for Murder", Satan sends Goofy to Hell for his involvement with 9/11.

In "High School English", Satan gets mad at Stewie Griffin for taking all the credit for making the deviled eggs that they both made together. Mad about Stewie stealing his thunder, Satan rampages through the kitchen and starts breaking dishes. 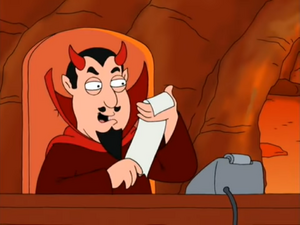 Satan finds that Peter's soul is up for auction. 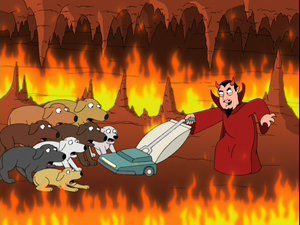