Be the Ultimate D&D Player.

Satan is a recurring villain in the Netflix original series, Paradise P.D. He is a giant evil demon who rules over Hell. He is also a nerd who plays Dungeons & Dragons, and especially likes the girly female character, Wanda Lynn.

In "Dungeons & Dragnet", Satan rose from the flames of Hell in Paradise Pentecostal Church, being summoned by Kevin playing the Satanic board game, Dungeons & Dragons. Satan said that he was there so that he could challenge the greatest Dungeons & Dragons player in the land and made a bet. If he could win the game, he would take over the world and if he loses, he would go back to Hell. Kevin accepted his challenge but Satan laughed in his face and scoffed at him, saying that he was not the person he was talking about, as the true master of D&D was Randall Crawford, also known as "Waldack Whitestaff".

Satan and Randall played Dungeons & Dragons against each other, while Neil was the judge. Randall played Waldack and Satan played a fairy princess character Wanda Lynn, which Randall made fun of him for. For days, the two both rolled perfect 20s against each other, making their battle perfectly tied. Finally, after three days, Neil got sick of waiting and said that the game was coming to an end. Whoever rolled the highest number officially wins. Randall's hand cramped so he couldn't roll, so Kevin took his spot and rolled a 19. Satan laughed in Kevin's face for making such an idiotic move and teased him over the fact that he was inevitably going to lose. However, while doing the gloating dance, Satan accidentally dropped the dice and it landed on 1, making him lose. Satan tried to argue that this didn't count but Neil said that a roll was a roll. After this, Hell opened back up and giant flaming hands grabbed Satan and Neil and dragged them back down again.

In "Flip the Vote", Bullet overdosed on meth, died, and went to Hell. There, he came face to face with Satan, who, at the time, was playing with a Wanda Lynn action figure and brushing her hair like he was a little girl. Satan got up from his evil throne and welcomed Bullet to Hell, describing the eternal suffering he was about to go through. Just then, Bullet mysteriously disappeared, much to the confusion of Satan. Back on Earth, Bullet came back to life, after being revived by Gina, who used an EpiPen to save him.

Bullet bought a bunch more houndstooth meth and told Dusty that he was going to kill himself and go to Hell so he could screw with Satan. He instructed Dusty to revive him after a while to bring him back before Satan could do anything and proceeded to kill himself with meth. Bullet went back down to Hell and insulted Satan, knowing he could piss him off. After making a crude comment to Satan, Bullet flipped him off and awaited his resurrection. After an awkward pause, Dusty came down to Hell, revealing that he overdosed on meth too. Bullet was mad about this but Dusty assured him that he got Gina to take over the EpiPen shift for him. Just then, Gina came down, having also taken meth to kill herself. Gina assured the duo that Hopson had taken over her role. Just then, Hopson came down, saying that he just died of a heart attack. This screwed all four of them over, as they were all now trapped in Hell with Satan with no means of returning.

In Hell, Satan introduced the four cops to his torture devices. He showed them his Rube Goldberg machine, which he was going to use to torture them. While he explained how it works, the four of them escaped, running off to a strip mall down in Hell. They went into Discount Possessions and Dusty used a virtual reality headset to possess a pony on Earth. Using the ponies, he controlled it to go back to Paradise Police Department and use the EpiPens to bring himself and everyone else back to life. Unfortunately, with his horse hooves, he could not pick up the EpiPens. Fortunately, his horse's ass accidentally knocked a coffee machine off the table, which landed on the ground next to Hopson, electrocuting him to awaken him from his heart attack. With Hopson alive, he revived everyone else's bodies just in time for them to escape Satan's grasp. 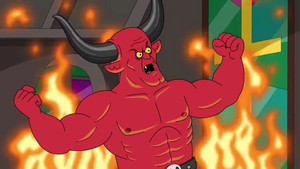 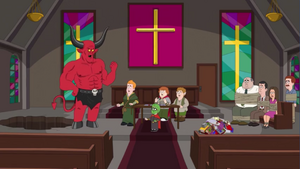 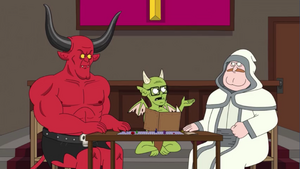 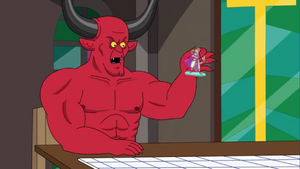 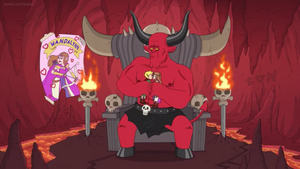 Satan plays with stupid girly dolls in his spare time. 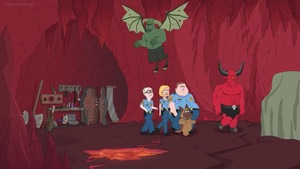