Son of the Anti-God

Set the Anti-God free and bring darkness and chaos upon all creation.

Satan is the well-known enemy of both God and humanity, and the secondary antagonist of the John Carpenter 1987 supernatural horror film Prince of Darkness. This version of The Devil is a primordial, constantly swirling green liquid that is the embodiment of the powerful demonic being that is called the Evil One. He also serves his "father", a more powerful and malevolent force called the Anti-God.

Satan known by all to the most malevolent figure in the biblical traditions of the Abrahamic religions, was actually the child of another, yet less-known and malicious immortal entity, a god who walked the Earth eons ago and imprisoned his son in to a cylinder for 7 million years in what is now known as the present-day Middle East before his banishment to the dark side of the universe.

Centuries later, in ancient Isreal, Jesus who comes to warn every one of Satan, and even his dark father too, was believed to be of an, as well as the Romans, try, but of a human-like race. Finally, the religious Jewish authorities, as well as the Romans, determined Christ was crazy but he was also gaining power, converting many people to his beliefs, so they had him murdered by execution and crucifixion. But his disciples kept the secret from civilization until mankind develops a science sophisticated enough to determine and prove what Jesus has warned.

In the 16th century, a Christian sect in Spain called the Brotherhood of Sleep, found the canister somewhere in the Middle East and had rearranged to its relocation by the Spanish government. The Brotherhood took the ancient object to the New World (Americas) and took a vow of silence, even about their own existence that no one, not even the Vatican knew about them or the cylinder they guarded. And they do so for many years ever since.

Satan and the Anti-God

A priest invites Professor Howard Birack and a group of academics and students from the Doppler Institute of Physics to join him in the basement of the abandoned Saint Goddard's Church in downtown Los Angeles, where he requests their assistance in investigating a mysterious cylinder containing a constantly swirling, green liquid. Among those present is Brian Marsh, a student in metaphysics. A young radiologist named Susan Cabot among the assembled team of students and researchers recognized the place as a once beautiful and live church back in the 1950s that her husband's parents used to attend to before it was closed down for an unknown reason. The group later learned from the priest who requested to join him that the priest named Father Carlton who was in charge of Saint Goddard's before he recently died of natural causes, was the last living member of the same forgotten Christian sect known as the Brotherhood of Sleep.

After researching the text found next to the cylinder, it is discovered that the liquid is the corporeal embodiment of Satan. The liquid appears sentient, producing increasingly complex data that is revealed by computer decoding to include differential equations.

Over a period of two days, small jets of liquid escape the cylinder and possess the group including Susan as his first victim, one by one to use them against the remaining survivors. Attempts to escape the building are thwarted by a mass of possessed street people who surround the building, barricade the doors from the outside, and kill two of the group.

Birack and the priest theorize that the being within the cylinder is actually the son of an even more powerful force of evil, the "Anti-God", who is bound to the realm of anti-matter. The survivors also find themselves sharing a recurring nightmare (apparently a tachyon transmission sent as a warning from the future year "one-nine-nine-nine") showing a shadowy figure emerging from the front of the church. The shaky transmission with the shadowy figure seems to change slightly with each occurrence of the dream, revealing progressively more detail. The narration of the transmission each time instructs the 'dreamer' that they are witnessing an actual broadcast from the future, and they must alter the course of events to prevent this occurrence.

Eventually, the cylinder opens and the remaining liquid is absorbed into the body of Kelly, one of the students with a strange bruise that is shaped like the Brotherhood of Sleep's very own crest which is thought by Brian Marsh's girlfriend Catherine Danforth from her history knowledge as an astrologer staff (a vaguely loose reference to the caduceus symbol used in astrology and alchemy as well as in ritual magic), who becomes the physical vessel of the Devil: A gruesomely disfigured being, with powers of telekinesis and regeneration, who attempts to bring the Anti-God through a dimensional portal using a mirror, initially failing because the mirror is too small.

Kelly finds a larger wall mirror and begins to draw the Father's hand through it as most of the group are immobilized by fights with the other possessed members and believes them to be no threat. Marsh's lover, Catherine Danforth, is the only one free to act, so she tackles Kelly, causing both of them to fall through the portal. The priest shatters the mirror, trapping Kelly, the Anti-God, and Danforth in the other realm. Danforth is seen briefly on the other side of the mirror reaching out to the portal before it closes, leaving her in darkness. With the bulk of Satan's power trapped in the other side, his power in our world wanes causing the possessed to die, and his influence on the street people ceases making them wander away, and the survivors are rescued, relieved that the evil has been thwarted.

Marsh has the recurring dream again, except now an apparently possessed Danforth is the figure emerging from the building. Marsh appears to awaken, rolling over to find a gruesomely disfigured Danforth lying in bed with him. Marsh awakens, screaming, and then recovers enough to approach his bedroom mirror, hand outstretched. The film cuts to black just before his fingers touch the mirror. 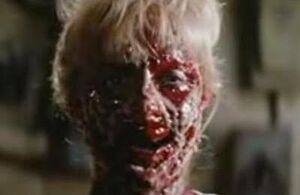 Satan's somewhat actual form after he possessed Kelly as his chosen vessel.