Beast and terrorizer of Mount Pleasant.

Killing and eating people and anything else that comes across its path.

Kill Joseph Capelli, Father Jonathan Rose, and anyone else that gets in its way (failed).

Satan is a major antagonist in the game Resistance 3. It is an enormous Feral Chimera, resembling a colossal leaper, that inhabits Mount Pleasant, Pennsylvania. The creature was given that name by the ultra-religious inhabitants, lead by Father Jonathan Rose and his wife, Jean. It lives in the vast network of tunnels that made up the mines running below Mount Pleasant, and was known to be quite dangerous and aggressive, having killed at least 100 people.

Satan's background is largely unknown. The only information given about the creature is that it is said to suddenly come up from the mines below Mount Pleasant and devastated the town. The residents tried to kill the beast but this would prove to be futile. Jean claimed it had killed more than 100 people in the few months since it had first emerged, though this was likely an exaggeration, as it conflicted with her husband's description, which claimed that it had killed only a few small groups of hunters who attempted to kill it. According to Jonathan Rose, a recent hunting party of twelve was sent to hunt down Satan that was slaughtered down to one survivor, who lost one arm and half a leg. Satan would continue terrorizing the residents until Joseph Capelli and Fyodor Malikov arrived to the town, where Joseph confronts and eventually kills the creature.

Joseph Capelli, John Harper, and Jonathan Rose descended down into the mines in order to hunt down the creature, while fighting and killing a bunch of grims (group of Feral Chimera) along the way. Satan eventually appears and badly wounds Jonathan, and he was left behind. Joseph and John then go through a cat and mouse like game avoiding not getting killed by the creature. Joseph and John are able to get into a cart and go through the tunnels while Satan gives chase. Joseph is able to slow it down by firing at its face until you reach a dead end. Ultimately, Satan is killed by Capelli and Harper as it tried to corner them in a service elevator by throwing and shooting an acetylene tank into its mouth, causing it's head to explode. The creature's reign of terror was finally put to an end.

Satan appears in the game at the Time Station stage as a stage hazard. Specter (enemy of Spike and main antagonist of Ape Escape series) was summoning him from the time portal, who then begins to attack the players. It was seen spraying acid on the players with it's mouth. Eventually the Satan Chimera was pulled back into the portal.

Satan only is able to perform one ability. He will spray his green acid on the stage which will stun the players who are hit by it and will make the player gradually lose AP (for a short amount of time). It's acid always covers the bottom of the stage and the first two platforms. 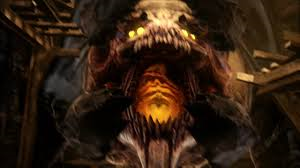 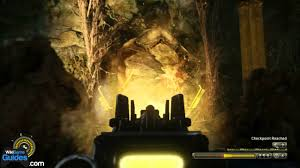 Satan chasing Joseph down the mine 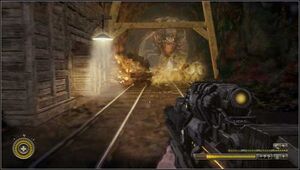 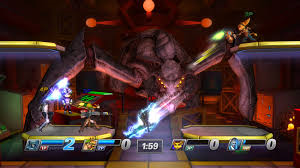 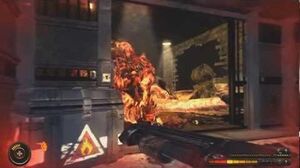 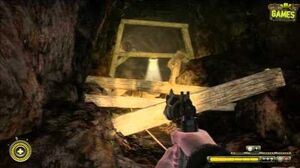