Spending time with his loved ones.
Giving information to those who summon him.

Satan is a major character in the black comedy animated sitcom South Park and a major antagonist in the 1999 film South Park: Bigger, Longer & Uncut.

He is based on the Judeo-Christian-Islamic demon extraordinaire of the same name. He presides over Hell, is at war with Jesus and God and has also suffered from dependence on relationships.

Despite being the ruler of hell, Satan is sometimes depicted as an anti-villain or even a hero. This is due to his soft, sensitive and understanding nature that is commonly shown in the series and the movie.

Many of Satan's appearances on South Park (as well as his role in the film South Park: Bigger, Longer & Uncut) focus on his romantic attachments, all of which so far have been homosexual. In the film, he is one of the two main antagonists alongside Saddam Hussein, though at the end of the film, he undergoes a change of heart, and calls off his attack upon Earth. In the beginning of the story, Satan is romantically involved with Saddam Hussein. As the plot of South Park progresses, Satan exiles Saddam after Saddam becomes too domineering. Satan has since had two other partners, Chris and Kevin (see below). Satan also has a rarely seen son named Damien, who, while never specifically labeled as the Antichrist, is based on the character from The Omen. Satan makes a cameo on the end of the current opening.

Satan has tried three times so far in the course of South Park's run to take over Earth: in the episodes "Damien" and "Best Friends Forever", and also in the feature film South Park: Bigger, Longer & Uncut. All three attempts failed, with the last also leading to Satan's breakup and out-of-anger murder of his then-boyfriend Saddam Hussein, although his attempt in "Damien" was fake — the real reason he did it was to get rich on the money that the townsfolk had bet on him.

Satan has been depicted in three romantic relationships. His most significant relationship was with Saddam Hussein in South Park: Bigger, Longer & Uncut. However, Saddam was emotionally abusive to the meek and emotionally dependent Satan, and was interested in Satan solely for sex and world domination than out of love. With some prompting from Kenny, Satan stands up to Saddam, casts him back down into hell, impaling him on a stalagmite, and calls off his invasion of Earth.

Saddam is seen again in "Do the Handicapped Go to Hell?". By this time Satan has a new boyfriend named Chris, a passive milquetoast who avoids conflict and confrontation. Saddam asserts to Satan that Chris is not fit for Satan, who truly prefers rebellious troublemakers like Saddam himself, and after inviting Saddam to his hotel room, the conflicted Satan spends the night with him. Subsequently, Chris and Saddam began to kill each other repeatedly — appearing alive in Hell the next day — until Satan seeks God's advice. God points out to Satan that Satan is too dependent on relationships, and needs to learn to develop his own sense of independence and self-worth, rather than choose partners who are bad for him. Satan decides to break up with both Saddam and Chris, and when Saddam refuses to acknowledge Satan's wishes, Satan banishes Saddam to Heaven, which is populated entirely by Mormons.

In the 2005 episode "Best Friends Forever", Satan has another boyfriend named Kevin, who acts as his advisor, and urges Satan along in his attempts to conquer the universe; however, when it is clear the battle is lost for them and the figure continues to press him, Satan breaks up with Kevin and dispatches him.

Satan returns in the "Cereal" arc of Season 22 after Manbearpig is revealed to be real and goes on a mass killing spree. He tells Stan, Kyle, Kenny and Cartman that someone made a deal with Manbearpig which is why he is wreaking havoc on the town. Cartman convinces Satan to help fight Manbearpig because "Humanity is doing his (Satan) work for him." Satan agrees and fights Manbearpig, but he proves too powerful and is defeated and killed. His sacrifice and redemption grant Satan's spirit to be accepted into Heaven.

Satan was the ruler of Hell, and he often found his way up to the town of South Park to carry out his nefarious, and occasionally harmless, schemes. He is openly homosexual. Despite being evil incarnate, he has a compassionate and vulnerable personality. He even has a change of heart in the movie, and becomes an anti-heroic figure. Although he may seem dark and evil at times, his darker moments are just acts, and he is genuinely a nice person. 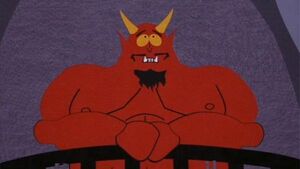 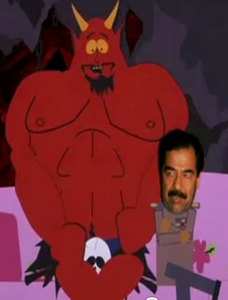 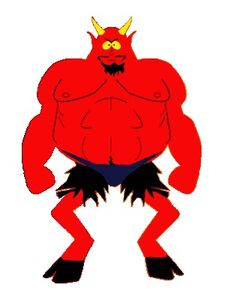 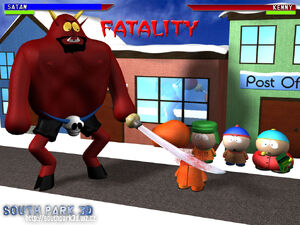 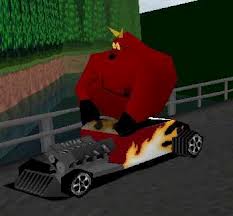 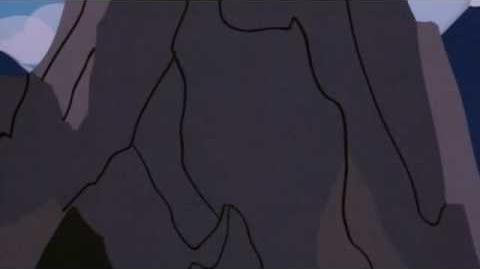 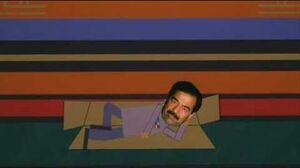 I Can Change - Saddam Hussein (South Park The Movie)