One of two overseers of Earth (formerly)

Battling God for control of Earth.

Satan is one of the overarching antagonists of the Spawn comics. He is the brother of God and one of the two sons of the Mother of Existence. He occupies within the lowest depths of Earth known as Hell, serving as the master of all demons such as Violator, Malebolgia and Mammon.

For many years, it was believed that Malebolgia was The Devil in the Spawn universe. However, in fairly recent times, the true face of Satan has risen - he is the supreme source of evil and the undisputed ruler of Hell within his setting. He was directly involved in the main story by being reincarnated as Katie Fitzgerald one of Wanda's twins and in Spawn: Resurrection onwards.

Along with his adversary, God, they are both children of the Mother of Existence, the creator of the universe and all its worlds. Mother gave each of its infinite children a world to run as they wish; God and Satan were both given Earth. Having a different point of view, the two constantly bickered and fought to the point where they declared war on one another. Mankind was subsequently created by God, but given free will by Satan. Due to this combination, Mother viewed humanity as unique, and decided to act on their behalf, rather than let her children use them as cannon fodder. Regarding God and Satan as disappointments, she stripped both of her children of their kingdoms and made them sleep in a forgotten corner of the universe. Mother was willing to give them a second chance, however, when she brought back God and Satan as the human children of Terry and Wanda Fitzgerald, Jake and Katie Fitzgerald respectively, in order to give them an appreciation for humanity and change their ways. This plan failed, as the twins simply became more insane than before and began to wreak further chaos on Earth. God and Satan have since regained their memories, powers, and kingdoms, and are bolstering their armies for the final push towards Armageddon.

Being the Supreme Ruler of Hell, every other Lord, including Mammon and Malebolgia, must answer to Satan's will. In his absence, Malebolgia served as the grand master of Hell, creating a massive army to destroy Heaven, and thus creating the Hellspawn.

It would seem that Satan is highly feared by the other demons in Hell. For example: with the recent reappearance of Satan in Hell, Mammon seems to have fallen out of his place of power. Even his former servant Thamuz seemed ready to turn upon Mammon and destroy him at Satan's command. However, Mammon manages to save himself from Thamuz by offering Satan a way to increase the ranks of Hell's army - namely triggering the San Andreas Fault.

He also appears as Katie Fitzgerald where he becomes more involved in the plot. He and God were banished by Spawn.

In the Spawn: Resurrection series, Satan's origins has been changed and he is now the Big Bad of the reboot series; God now the benevolent Supreme Creator and the one who gave humanity free will, while Satan is still being the undispitied ruler of Hell. Spawn later defeated him and saved his wife as well as sealing the gates of both Heaven and Hell. Satan was killed and Hell's new leaders prove to qualify to replace him. In #296 and #297, Satan appears in the recap in his demon form from Satan wars and as Kate Fitzgerald in the Armageddon arc.

Satan is equal in power to God - though it is worth noting that in Spawn's unique cosmology God is not the Supreme Being (that title belongs to the Mother of Existence until the retcon in recent years), this puts Satan roughly on the scale of a demiurge, which is a supernatural being similar to a deity yet ultimately being subservient to a higher power (even if they do not know it). However folllowing the retcon with Mother of Existence out of the series, God and Satan are now equals again ruling their respective domains. Though issue #297 confirms that Mother of Existence and the arcs that involved her are still there, so God and Satan are still equals. 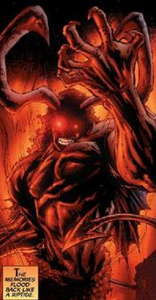 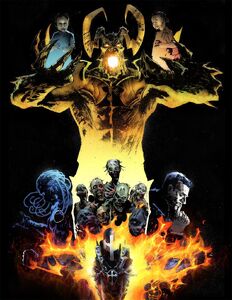