The Devil
The Tempter
The Fallen Angel
Lord of All Evil

The Passion of the Christ

Influencing and driving people to sin and commit atrocities.

End God's will.
Kill and destroy Jesus Christ. (All Failed Except Humanity)

Satan is the main antagonist of the controversial 2004 film The Passion of the Christ, which recounts the final days of Jesus Christ prior to His crucifixion as recorded in the Bible. He is represented as a corrupting force, embodied as a genderless, pale humanoid figure.

He is portrayed by Italian actress Rosalinda Celentano.

In the late hour of night, Satan appears to Jesus Christ praying in the forested garden of Gethsemane. He tries to deceive Jesus by "warning" Him of the dangers of dying to atone the sins of humanity. This, hypothetically, would cause God's will to fail.

Jesus, nevertheless, ignores him and continues to pray. However, a serpent emerges from Satan's black cloak and slithers towards Jesus. He notices this in time and crushes it with His foot. Satan promptly vanishes from the scene.

Later, Satan assigns his demons to influence and (presumably) possess Judas, one of Jesus' disciples. Possessed, Judas is delighted by the offer of being offered 30 pieces of silver in exchange for handing Jesus to the religious authorities in the Temple of Jerusalem. Judas, along with the Roman soldiers that controlled the area, manage to track Jesus down. Judas proudly displayed his betrayal of Jesus by kissing Him on the cheek. The soldiers aggressively escort Jesus out of the scene and He is subjected to several humiliating trials in the Temple of Jerusalem and was sentenced to death.

Realising the errors of his ways, Judas tries to return the 30 pieces of silver to the authorities. They refuse his offer. At the same time, Satan and his demons, embodied as human children, torment Judas for his actions. Judas decides to flee the city but Satan and his demons catch up to him. Seeing a rope from the body of a dead donkey, Satan drives Judas to hang himself on the branch of a parched tree.

Meanwhile, after the trials, Jesus is interrogated by Pontius Pilate, the Roman governor. Despite being innocent, the hostile crowd demands Pilate to crucify Jesus. Pilate reluctantly complies to their demands as Satan enters the scene to influence and corrupt Pilate’s centurions. Satan expresses his utter hatred towards Jesus (and God's creations overall) by driving the centurions to mock, starve, whip, lacerate, mutilate and scourge Him several times. Whilst Satan sadistically watches Jesus being tortured, he holds a demonic baby in front of him to further taunt Him. A severely crippled Jesus then encounters a young girl, who provides Him water, but the centurions, with Satan's approval, cruelly prevent her from doing so. Satan further encourages the centurions to force Jesus in carrying His cross to the site of crucifixion, beating Him whenever he fainted from exhaustion.

Jesus is ultimately crucified on the cross after hours of torture. After three days, he is miraculously resurrected, hence successfully completing God’s will of atoning for the sins of humanity. Meanwhile, Satan is imprisoned in a dry and hellish dimension, screaming at his own agonising defeat. 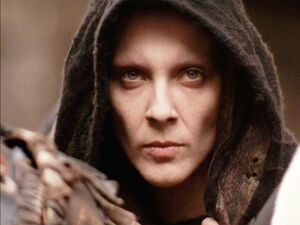 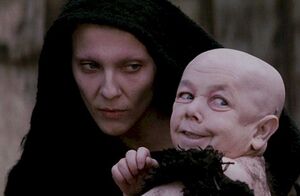 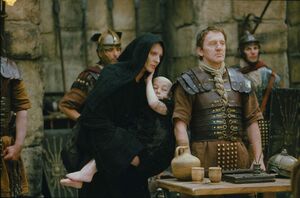 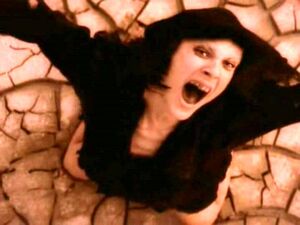 Retrieved from "https://villains.fandom.com/wiki/Satan_(The_Passion_of_the_Christ)?oldid=4275643"
Community content is available under CC-BY-SA unless otherwise noted.