Comical Satan
Satan is a one-time villain from the 2016 reboot of the Cartoon Network original series, The Powerpuff Girls, only appearing in the episode "Ragnarock and Roll". He is the ruler of Hell and the lord of darkness and he ordered a mystical demonic trumpet from Discount Cheap Things Warehouse, that got mixed up with The Mayor's package in the mail, leading to him getting an unwanted jar of pickles.

In "Ragnarock and Roll", The Mayor of Townsville got a package in the mail that contained a demonic blowhorn. Apparently, there was a mixup at the delivery company of Discount Cheap Things Warehouse and The Mayor accidentally got Satan's mail. Meanwhile in Hell, Satan was shown sitting upon his throne of bones, opening a package that was addressed to him, only to be confused when he took out a jar of pickles, that was clearly supposed to be sent to The Mayor of Townsville.

The Mayor blew the mystical demonic trumpet, which summoned a giant Lava Monster to destroy Townsville.

At the end of the episode, The Mayor swore off ever buying anything else from Discount Cheap Things Warehouse, after seeing how much destruction the demon horn caused. Just then, Satan came knocking at his door and when he entered, he accidentally got his mail, as he took out his pickle jar. 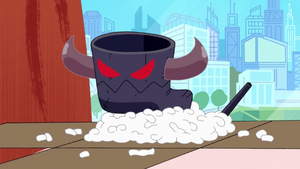 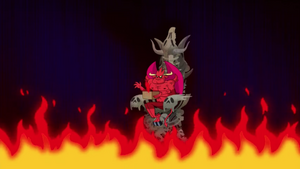 Satan sitting on his evil throne in the pits of Hell 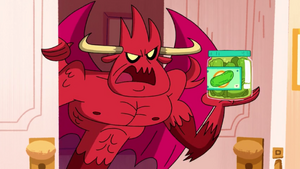 "Yeah, anyone order some pickles?"
Community content is available under CC-BY-SA unless otherwise noted.
Advertisement