Villains Wiki
Register
Don't have an account?
Sign In
Advertisement
in: Mature, Satan, Evil from the Past,
and 31 more

Satan (This Is The End)

This Is The End

Multiple eel-like serpent heads on the back
Titanic size

Satan is the main antagonist of the 2013 dark comedy-fantasy film This Is The End.

Satan is dead-set on bringing forth Armageddon onto the Earth and destroying all life, presumably so he can increase his amount of doomed souls forced to do his bidding. He unleashed his hellish legions both to possess humans as means to coerce them to do his bidding (as shown in the case of Jonah Hill's possession) and wreak widespread havoc and killing remaining survivors in the ongoing apocalypse.

During the apocalypse, Satan was released from hell alongside other demons where they proceed to either corrupt or slaughter unfortunate humans who caught within their path for destruction. While physically unseen, a picture of Satan was shown in Franco's Bible as Jay proposing that the biblical apocalypse has befallen the whole world.

Though his presence can be felt throughout the entire film with his demons ravaging the world and even referenced by Jay, Satan does not make his onscreen debut until the film's climax. He finally appears before Jay and Seth not long after escaping Danny McBride. Fortunately, both celebrities' reconciliation and admission of their past wrongdoings earned them their Rapture for Heaven. At first, only Jay who earned his salvation as Seth hasn't completely coming into terms with his past wrongdoings, prompting the former to take the latter with him as he ascends to the heaven. Because of this, the process of Jay's Rapture becomes interrupted, giving Satan an opportunity to break through Jay's divine beam to no avail. Unwilling to burden Jay, Seth comes into the terms with his own wrongdoings and fate before lets go, plummeting into Satan's mouth as Jay helplessly watched.

Unfortunately for Satan, Seth's confession in the middle of his heroic sacrifice granted him his own salvation, at which he quickly joins his best friend for the Gates of Heaven. To add insult to injury, during Seth's unexpected Rapture, his holy beam severely injured Satan and sliced his penis off.

The demon lord is last seen with his severed penis on one hand and the other holding his bleeding crotch as he roared in dismay upon the two celebrities' salvation. Since he survived this ordeal, it can be assumed that Satan continued his ongoing rampage or had died from blood loss and ended the apocalypse.

As depicted in James Franco's bible, Satan takes the appearance of a hoofed-legged, humanoid horned demon with several eel-like heads protruding from his back.

Said depiction later proven to be accurate as discovered by Seth and Jay in the film's climax, though to both celebrities' horror, Satan revealed to be kaiju-sized with body comprised of hardened lava and has a large, exposed penis. Also, he bleeds magma. 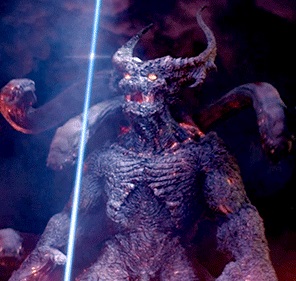 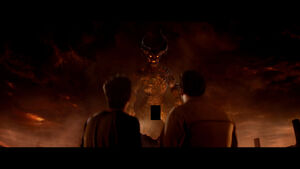 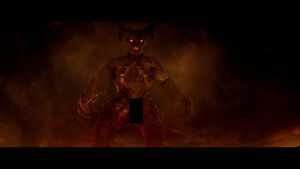 Satan's evil grin as he prepares to kill Seth and Jay with his tentacles.

Satan attempting to devour Seth, only for him to get raptured.

Satan's angry stare as he watches Jay taking Seth away while being raptured. 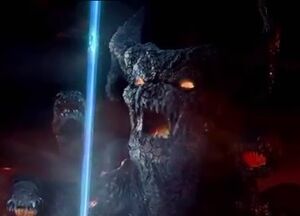 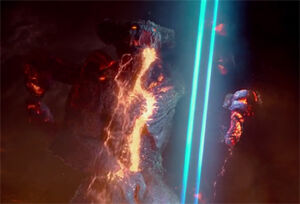 Satan's humiliation after having his penis sliced off by Seth's rapture when attempting to devour him. 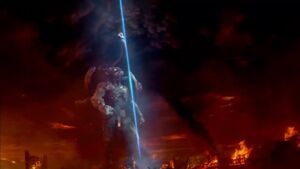