Touched By An Angel

Destroy God and all of creation.

Satan is the overarching antagonist in the TV series "Touched By An Angel" and often took the form of human beings so as to try and tempt people from the path of God - his efforts were opposed by the angelic heroes of the series, who often had to help people regain faith in order to ward off Satan's influence.

Although the majority of the series was based on personal struggles rather than supernatural threats, a few episodes did show Satan to be the main instigator of evil - such as when he tried to corrupt a group of religious people into adopting a racist doctrine via disguising himself as a preacher.

By his very nature, Satan could also be argued to be involved behind the scenes in every one of the series conflicts or tragedies - though he only appeared personally in a few episodes.

In the series, he was portrayed by Mandy Patinkin, who also played Huxley in The Adventures of Elmo in Grouchland. In other episodes, Satan's human forms were played by actors such as John Schneider (taking on the form of a local politician who happens to be the leader of a white supremacist group) in "In the Name of God", Todd Rulapaugh (taking on the form of an auto mechanic) in "Breaking the Bread", the late David Ogden Stiers (Taking on the form of a ruthless prosecuting attorney), and even Roma Downey (The actress who played Monica on the series) as Monique in "Two Sides To Every Angel" and "The Man Upstairs".

Appearances In The Show

"In The Name Of God"

Satan manifested as an authority figure in a small community and used his influence to form a white supremicist group that twisted faith into aggression - this angered Tess to the point she temporary lost her angelic powers and was replaced by another angel named Sam. However after reconciling with God, Tess joined the other angels in a raid of the area Satan was corrupting, where they revealed his true nature to his would-be-pawns and ultimately foiled his plan.

Satan appeared as a smart driver who tempted Monica after the angel's faith was momentarily shattered upon seeing a bombing that caused a number of deaths - trying to play on her insecurities so as to convert her to his cause and abandon God. His main goal this time was to try and convince Monica to allow him to turn her into a human. Ultimately Monica's own faith proved stronger than Satan's temptation and he left.

Satan is depicted as a treacherous master manipulator with a talent for words, he is said to rely heavily on his reputation but has his pawns do all the dirty work - when confronted Satan will try to turn the tables on his opponents and gain possession of a would-be-victim via trickery or falsehoods, yet when his true nature is revealed he quickly leaves as he can not stand to be among those of strong faith.

Satan seems to view freewill as a curse, as he noted to Tess once, trying to control others and stealing their gifts and ultimately their lives - subtly leading them on the path of ruin.

Presumably Satan also exhibits the same pride and wrath as the Biblical Lucifer, as well as any number of vices found in the Seven Deadly Sins.

Satan is also shown to be extremely petty and provocative since he outright rejects when Tess informs him that God loves him too (despite all the things he has done) - Satan thus confirms that he willingly rejects any concept of salvation for himself and is doing most of his deeds to provoke God, who Satan has grown to despise and thus views himself as a superior - despite this Satan has no choice but to obey when God enters someone's life and must quickly depart when a human asks God to remove Satan from their lives.. even when he does so he is sure to give small mocking tones, since he knows that he can never truly be defeated (even a high-ranking angel confirmed that Satan is "never truly gone" and requires strong faith to keep at bay).

Satan is depicted as being a powerful supernatural being who can appear as almost anything he desires - however when dealing with humans he is limited to utilizing their own free-will against them, exploiting pre-existing hate, fear or anger in order to manipulate them into breaking away from God and the postive side of life.

Satan is hinted at being omnipresent but by no means omnipotent - in fact it is established fairly early on that Satan will be left with no choice but to abandon a would-be-pawn or victim if he or she personally asks God for protection (in a broader term faith seems to be Satan's main weakness, the stronger the faith the less power he can hold over others - which explains why he tries so hard to corrupt others). 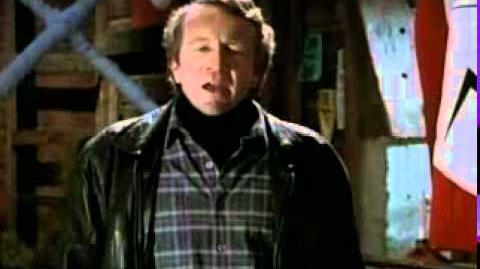 What's Wrong With This Picture?
A confrontation with Satan, from season 2.
Add a photo to this gallery
Retrieved from "https://villains.fandom.com/wiki/Satan_(Touched_By_An_Angel)?oldid=3863658"
Community content is available under CC-BY-SA unless otherwise noted.