Spoil all children with Christmas presents for eternity.

Satan Claus is the main antagonist of the 2013 animation video Kim Jong Un vs. Christmas made by CollegeHumor. He is an evil version of Santa Claus who travels around the world on every Christmas, along with his competitive minion named Rudolph Lundgren, and gives presents to children.

He was voiced by Kevin Michael Richardson, who also voiced Captain Gantu for Lilo & Stitch, Goro from the live action Mortal Kombat film, and Shredder of the 2012 animated TMNT series.

On Christmas Day, Satan Claus visits every house on the Earth and leaves some presents there, causing children to be spoiled, ungrateful and ignominious. North Korea is a regularity and the most glorious leader Kim Jong Un and his Robot Minister are soon called to discover the origin of one Korean boy's strange behavior who claims to be special and wants to get an Xbox. The test shows that he is under influence of the western decadence. Kim and Robot Minister then find the presents in the boy's house and realize who did it.

The duo catches the evil Satan Claus on another roof. However, before they can attack, Satan sends his competitive minion named Rudolph Lundgren on them. Kim manages to destroy him and then corners Satan with his blue lightsaber. Unable to move, Satan offers his opponent a present that he always wanted, but his father never gave it to him - Mickey Mouse ears hat. Kim is surprised and just about to take the present and let Satan to leave, so this is when Robot Minister suddenly interrupts their "conversation" and convinces his leader to refuse the present.

Satan Claus is then beheaded by Kim, but he is still alive. He sends his present sack flying and exploding above their heads, so the presents then fall into every house near them. At first, Robot Minister fusses as the kids "will want careers in the arts and protein in the diet". Luckily, Kim and he later managed to catch all of the presents before they land. 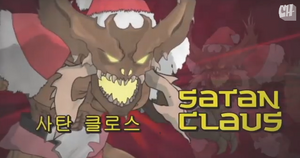 Satan Claus
Add a photo to this gallery 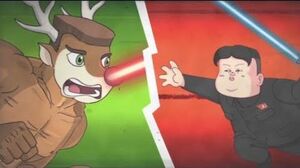 Kim Jong Un vs. Christmas
Add a photo to this gallery

Retrieved from "https://villains.fandom.com/wiki/Satan_Claus?oldid=3455743"
Community content is available under CC-BY-SA unless otherwise noted.