Satannish is a demonic supervillain from Marvel comics and a rival to Mephisto himself, having been formed from the same primordial mass of evil that Mephisto was but developing his own unique personality (note: this origin is questionable as he has also been stated to be the creation of the Dread Dormammu as an extension of his will) - Satannish is considered amongst the most powerful of demons to ever threat the sanctity of the Earth dimension, second only to Mephisto (and perhaps the so-called Satan).

Satannish can not inhabit the mortal realm for long and as such often works with foolish humans to gain what he wants, offering them superhuman powers and wealth, amongst countless other bribes, in exchange for their loyalty and souls.

It is unknown if Satannish requires souls to survive or simply steals them out of malice - given his demonic nature it is likely a mixture of both.

Satannish has gained a following in the form of the Sons Of Satannish but has also gained an enemy in the form of Doctor Strange, Earth's mightiest sorcerer and protector of humanity against the evils of Satannish and the other "hell lords". 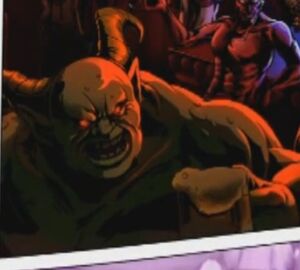 Satannish in Marvel vs. Capcom 3: Fate of Two Worlds
Community content is available under CC-BY-SA unless otherwise noted.
Advertisement