Stealing treasure for himself.

Steal the Golden Idol from the temple and abandon Indiana Jones to die and become rich (failed).

Satipo is a minor antagonist in the 1981 iconic action-adventure film Raiders of the Lost Ark, the first installment of the Indiana Jones film series.

He was a greedy guide and thief who helped out Indiana Jones to get the Chachapoyan Fertility Idol at the Temple of the Chachapoyan Warriors. He worked along with his partner in crime Barranca, teaming up with him to swindle and even murder adventurers who hired them at Peru, Colombia and Venezuela.

He was portrayed by Alfred Molina in his big film debut and first villain role, who also played Reverend Leland Drury in White Fang 2: Myth of the White Wolf, Snidely Whiplash in Dudley Do-Right, Johann Tetzel in Luther, Doctor Octopus in Spider-Man 2 and Spider-Man: No Way Home, Bishop Manuel Aringarosa in The Da Vinci Code, Professor Jeffries in Chill Out, Scooby-Doo!, Maxim Horvath in The Sorcerer's Apprentice, Ke-Pa in Kung Fu Panda: Legends of Awesomeness, Ernst Stavro Blofeld in the On Her Majesty’s Secret Service radio drama adaptation, Rippen in Penn Zero: Part-Time Hero, Viggo Grimborn in Dragons: Race to the Edge, Destiny in Justice League Dark, Lasombra in Hey Arnold!: The Jungle Movie, Mr. Freeze in Harley Quinn, The Duke in Solar Opposites and Mictlan in Maya and the Three.

In 1936, Satipo and Indiana Jones entered the Temple of the Chachapoyan Warriors, in Peru. The aim of the expedition was to look for a golden idol. After a fearful encounter with tarantulas, Satipo followed Jones in swinging across a pit on Indy's bullwhip.

After Jones acquired the Chachapoyan Fertility Idol, he accidentally triggered the temple's booby traps, and ran out of the room with Satipo following him. The greedy Satipo betrayed him, stole the idol and left Jones to die.

The time when Indy threw the idol to him, he started to betray him but gets killed by a spike trap anyways.

Satipo and Barranca wondering through the jungle.

Satipo noticing some tarantulas on Indiana's back.

Satipo with many tarantulas on his back.

Satipo trying to stay calm as the tarantulas crawl all over him.

Satipo screaming upon seeing the corpse of Indy's competitor, Forrestal being caught on a spike trap.

Satipo being stopped by Indy from going to take the idol. 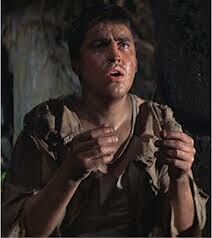 A good view of Satipo. 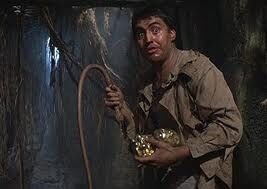 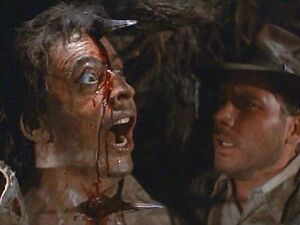 The aftermath of Satipo's death, 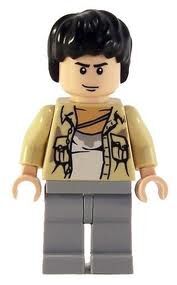 A Lego version of Satipo. 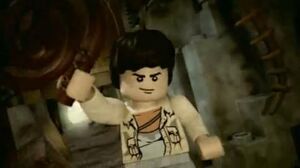