Get revenge on Miyagi and save his honor (formerly).

Sato Toguchi (in Japanese: 佐藤 Satō) is the enemy of Miyagi and the secondary antagonist of the 1986 movie, The Karate Kid Part II.

He was portrayed by the late Danny Kamekona.

During their childhoods, Miyagi and Sato had a strong brotherly friendship. Their friendship was so strong that Miyagi even asked his father to teach karate to both him and Sato, which Miyagi's father agreed to (even though traditionally it had only been taught from father to son).

However, when the two grew older, Sato had been arranged to marry a girl named Yukie. Although Yukie was arranged to marry Sato, she had instead fallen in love with Miyagi. Their love for one another was so strong that Miyagi had announced that he would break the tradition of arranged marriage and marry Yukie anyway. Sato, however, felt disgraced and challenged Miyagi to a fight to save his honor. But Miyagi left Okinawa, Japan the next day. When Miyagi returned to Tome village with Daniel, Sato had become a rich industrialist and had been eager to face his old friend in a death match. However, the two became friends again after Miyagi saved his life during a typhoon.

Sato is not a villain per se, but however more along the lines of the tragic anti-hero. All of Sato's actions against Miyagi were out of anger of his former friend dishonoring him - though he shows some signs of sympathy and respect, by letting Miyagi and Daniel see Miyagi's father for the last time and honoring a lost bet between Daniel and Chozen. 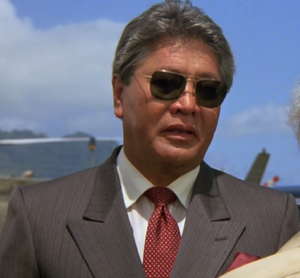