Saul
Saul of the Tribe of Benjamin

Get rid of David (failed).

Envious Monarch
Saul is a protagonist-turned-antagonist in Judeo-Christian religion. He earned his name from the Greek term Saoul, which means "called for". While he started out as a good king, his pride and his envy led to becoming more corrupt.

Sometime after the era of the judges, the people of Israel approached Samuel, a prophet and the final judge over Israel, and stated that they desired a king much like the neighboring countries. Despite Samuel and God's reservations on it, the people insisted on it. In 1 Samuel, God made Saul the first king of Israel. According to scripture, Saul was born to Kish and was of the Tribe of Benjamin. Despite initially being reluctant, he accepted his call, and Samuel anointed him as the first king of Israel. Eventually, he had some children, including Michal and Jonathan.

He started out as a great ruler, but he later started to stray away from God. For example, in 1 Samuel 10:8, Samuel told him to wait seven days for his instructions while he goes to prepare a sacrifice. However, due to the fear of the war, he sacrificed offerings to God, much to Samuel's disgust. Later Saul was instructed to kill the king, people and livingstock of Amalek due to said tribe's oppressive nature, but he instead kills less of them and spared the king to have him as a hostage. Even more disgusted, before killing the king of Amalek, Samuel stated that as a punishment, his kingship would be taken away from him.

The person appointed to be his replacement was David, a shepherd, even if he wasn't as apparently strong as his brothers. David also played the lyre for Saul, which relieved the pain of his mental oppression and evil spirits. After David defeated Philistine soldier Goliath, David was accepted in the army. However, due to the people of Israel often lauding David over killing more enemies than Saul, the latter became envious of David, to the point he tried to kill him more than once. He also grew to become unhappy about his son Jonathan's friendship with David due to wanting him, not David to be his successor.

At least twice Saul attempted to kill David by throwing a javelin at him out of anger. In one instance, Saul gave David a seemingly impossible task of going to a town to slay a thousand Philistines and then bring them the foreskins as proof. He would in exchange give his daughter Michal into David's hand for marriage. Unfortunately for him, David succeeded at this task, and he respected his part of the deal. Saul's hatred for David reached its umpteenth when David was receiving praise for killings tens of thousands of Philistines. This eventually led to David going into hiding from the mad king. When Saul went to rest in a cave, he was found by David and was stolen by him. The next day, David explained him that while he was close to killing him, but he otherwise did not because he knew he had God's anointment.

When Saul learned David was assisted by Abimelech, he killed all the priests and all the inhabitants of Nob.

In the Battle of Gilda, due to not having any way of guidance, he secretly consulted a medium and had her invoke Samuel, hiding his identity since he had prior persecuted witches and mediums. However, Samuel exposed him as Saul and told him God abandoned him. In the battle, his army failed and his son Jonathan died alongside the rest of Israel soldiers.

Saul eventually redeemed himself and committed suicide at the Battle of Gilda while at the peak of the Philistine army. His shield-bearer did not want to kill him, so he killed himself with his own sword.

An Amalekite soldier attributed himself the achievement of killing Saul to try winning points with David, but due to the latter's insistence on respecting Saul's appointment it resulted in David killing him instead. 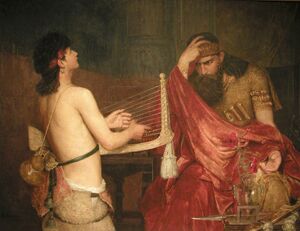 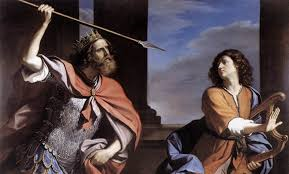 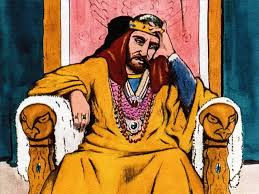 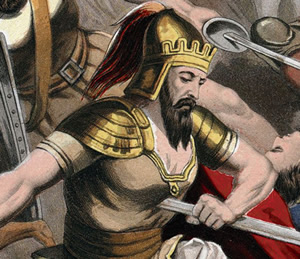