James Morgan "Jimmy" McGill, otherwise better known as Saul Goodman, is a major character from the AMC crime drama show Breaking Bad, and the main protagonist in its 2015 spinoff/prequel Better Call Saul. He is a sleazy "criminal lawyer" (in his own words: "a lawyer who is a criminal") who acts as Walter White and Jesse Pinkman's consigliere and up to a certain point, the series' comic relief. He uses the name "Saul Goodman" because he thinks his clients feel more confident with a Jewish lawyer; this name is also homophonous with the expression "[it]'s all good, man".

Jimmy McGill was born in 1962 to Ruth and Charles McGill Sr. in Cicero, Illinois. He had an older brother, Charles "Chuck" McGill Jr., who always held a resentment towards Jimmy for being the one his parents seemed to favor more (as well as his ability to easily charm others, particularly Chuck's ex-wife, Rebeca) - despite Chuck always playing by the rules and Jimmy committing the act of theft since he was at least 9. Despite this, Jimmy always held an admiration for his brother and would eventually become a lawyer to follow in his foot steps. When Jimmy was a child, he began working for his dad in his department store-constantly having to see him get conned into giving money to grifters, despite the young Jimmy's warnings to his father. At one point, Jimmy embezzled nearly $14,000 from his father's store, which lead to it's disclosure as well as his father's death 6 months later. Jimmy was deeply grief-stricken over the death of his father, but over time began to blame his father for it, due to never being able to take "no" for an answer. Jimmy claims to have had multiple wives in his past, one of whom he caught sleeping with his stepfather.

Jimmy McGill highly looks up to his brother, Chuck McGill who is a lawyer and co-owner of the law firm Hamlin Hamlin McGill, but claims to suffer from electromagnetic hypersensitivity, and Jimmy does everything he can to become high-ranking partner with his brother at the firm. At the time, he is mostly lawyering for small crooks and is very underpaid, until one day when he is practicing elders law, he notices that a retirement home is grossly overcharging the residents, making the elders pay more than they need to without knowing it. And Jimmy sees the opportunity to come up with a potential million-dollar case that can may let him work with HHM. But Chuck refuses to let Jimmy work with him with the case and practically steals the case from him, as he doesn't trust Jimmy for being a con artist in the past.

As Saul predicted, he ends up working as a manager at a shopping-mall Cinnabon in Omaha, under the alias Gene Taković-constantly living in fear of someone recognizing him and watching his old commercials at night to compensate for his depression over leaving his old life behind. He has become so paranoid of getting caught that he refuses to open an emergency exit door once he gets locked in a garbage room-out of fear for the police coming. He almost stays there all night until a custodian lets him out.

One day during Saul's lunch break, he spots a shop lifter trying to hide from a couple of security guards in a photo booth. Saul rats on him to the guards, but immediately feels guilty afterwards and advises him to "say nothing and get a lawyer", much to the guards' irritation. Due to the adrenaline of getting one piece of his old life back, he passes out when he gets back to work. He's taken to the hospital and is released once they rule out a heart attack and discover his blood pressure is normal. Saul almost leaves but is stopped by the nurse at the desk who needs another look at his driver's license. Saul becomes anxious of getting caught as the process takes a while, but she eventually works it out and lets him leave. Saul gets a taxi to drive, but realizes that the driver has an air freshner from Albuqurque hanging up on his rear-view mirror. The driver also seems to be observing Saul as if he recognizes him-becoming so distracted he doesn't immediately go at a green light. Saul becomes worried and has the driver drop him off earlier than he wanted in a neighborhood. As he walks away, he pretends to tie his shows to look behind himself-only the see the taxi hasn't left yet. 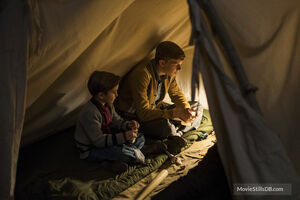 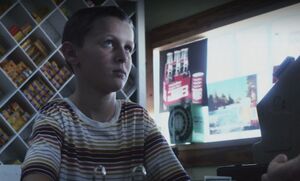 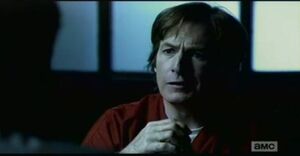 A young Jimmy begs his brother, Chuck, to help him get out of jail. 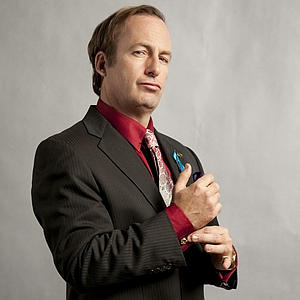 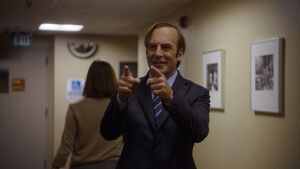 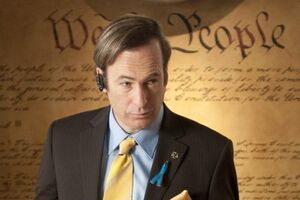 Retrieved from "https://villains.fandom.com/wiki/Saul_Goodman?oldid=3632698"
Community content is available under CC-BY-SA unless otherwise noted.