Sauron (Lord of the Rings: Conquest)

NOTE: This article is about the version of Sauron from the game Lord of the Rings: Conquest. You may be looking for information on his mainstream counterpart, his Peter Jackson counterpart, or his Shadow of Mordor counterpart.

Lord of the Rings: Conquest

Rule over Middle-earth and the world of Arda.

Sauron is the main antagonist of Lord of the Rings: Conquest and the main protagonist of the Evil Campaign. He is an alternate version of his novel counterpart.

When Frodo Baggins was weakened by the One Ring's power and claimed it for himself, Sauron's Nazgûl rushed to Mount Doom to claim the Ring and killed anything that got in the way. After killing dozens of orcs, the Nazgûl, led by the Witch-King of Angmar, locate and kill the corrupted Frodo to reclaim the Ring. With the One Ring returned to him and restoring his power on top of power new and vast, the free people of Middle-Earth were forced to retreat and defend their realms as Sauron intends to enact a huge retribution. Sauron also resurrects the Chatel of his who died over the course of the war, and called upon many of his darkest warriors and champions to slaughter in his name again.

The Invasion of Osgiliath

Following an orc scouting force's crossing of the Anduin River while blanketed by darkness, they begin Sauron's revitalized attack on the world with the onslaught by an elite horde being launched on Osgiliath at midnight from the far shore with the siege machines being poised to rain fire on enemy rangers while waiting for signals from hidden scouts to identify their targets in order to burn Osgiliath to the ground. Following the attack that claimed many lives in Osgiliath with the Mouth of Sauron involved, including that of Faramir, Sauron was pleased to see the orcs ground the city beneath their foot. The road lays open for Sauron's fresh hordes to invade Gondor. Within Mordor's camps, he calls fourth these forces to crush those who oppose him.

The Sacking of Minas Tirith

With Sauron's forces having breached Minas Tirith by shatteriing its gates and overunning the lower walls, the men of Gondor to the last man futiley try to put up a valiant defense against Sauron's feared forces who overpower them as they raid the frail city. After Saruman has the white tree burned and the throne room captured, Minas Tirith has been burning on all levels with its gates shattered and the lower circles overrun as the dead kings of Gondor watch in horror as Gondor is in ruin along with Minas Tirith as the Orcs hold a banquet in Ecthelion's White Tower to desecrate those among kings and commoners.

The armies of Mordor march relentlessly though the Mines of Moria where Gimli is making his final stand, but he and his fellow surviving dwarfs were not able to prepare their defenses in time while Moria was still dark and dangerous. It is also feared Sauron knew of Moria's darkest secrets and issued an order to carry out a terrible ritual. The dwarves hoped that the Dark Lord's power has not called a balrog into the world.

Sauron's forces proceed to capture the mine, killing dozens of Gondorians while destroying Balim's tomb and bringing a stone to the altar. The stonebearer mage was alo killed in the assualt. When the Balrog is finally summoned, it proceeds to kill Gimli and the other dwarves before joining in on the attack on the world, leaving Moria a place of evil none could enter forever as the Nazgûl continue their search for the remainder of the potential victims for Sauron.

The western armies have been forced to make their final stand at what was left of Weathertop where the Witch-King in the past led his geat host into a horrible victory where the northern armies of men were wiped out and the Tower of Amon Sûl was destroyed with its broken stones witnessing a last desperate struggle. There is also no longer anyway to retreat from the dark forces that been ongoing. Sauron's forces proceed to destroy the Gondorian Emplacements with the help an Oliphaunt and a golem, killing many ents and Gondorians who were present. After killing the royal guards with Saruman's aid, the dark forces proceed to kill Aragorn like his father was years ago, ending Isildur's bloodline and ending the last and greatest hope. This leads to a rising tide of malice and hatred bound to overhelm all.

The Fall of Rivendell

Rivendell has storms raging on every side of it with the last elves of Middle-Earth gathered in this location to make a last stand against Sauron's hordes with the risk of there being little for what survives to resist his darkness. Sauron's forces proceed to charge towards the front gate to capture it, killing those in their path. After it was captured, they proceed to continue their carnage to capture the terrace, claiming more lives in the process and capturing the signal fire.

When the fire was placed, Sauron's forces clear the area to avoid the incoming fire that destroys the pillar before proceeding to destroy the elven records while killing any who intervene in it. After defeating Elrond, Sauron's forces to seek out the ring of air and deliver it to Sauron who then takes action in the fight. Sauron personally proceeds to capture the river house, killing anyone who steps in his path. Once he captures it, he proceeds to kill Elrond and Legolas, leading to the elves defeat and only the Hobbits remainging as Sauron prepares to unleash hell on them.

The Razing of the Shire

Sauron's forces proceed to begin their reign of terror on the hobbits with no chance for them to escape the war with the last of the free men trying to aid them against a powerful enemy amassing for the attack with none left to withstand them, even Sauron. Treebeard proceeds to lead the final ent march towards the Shire to try and stop Sauron with many halfling archers hoping to help the remaining resistance for a short time. Sauron's forces proceed to destroy Hobbiton by killing what is left to resist, including the mobs of hobbits that fight. After destroying six Hobbit homes, the Balrog aids in killing Treebeard on the behalf of Sauron. Sauron's forces then proceed to kill fifty Hobbits to draw out Gandalf in order for Sauron to kill him personally with no chance of restoration.

With Gandalf dead, Sauron proceeds to enslave the Hobbits and all else that survives while Treebeard's body serving as a bonfire to throw halfling bodies to throw into. All who did not fight are now becoming the final victims of Sauron with their homes burning and the future of their children being sacrificed on the cruel Altair of Sauron. All that remains is death and ruin with no known limits from Sauron with darkness covering all living things. 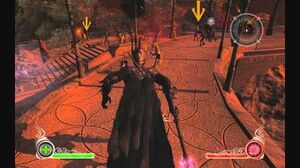 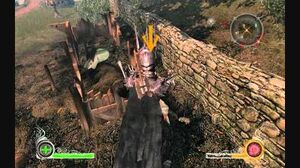