Sauron (Karl Lykos) is a supervillain from Marvel comics and an enemy of the X-Men.

Karl was the son of an adventurer, and on one expedition they traveled to Tierra del Fuego near the Antarctic Circle. On the trip Karl was attacked by giant pteranodons who had migrated there from the Savage Land, and was bitten by them. He survived, but somehow his genetic structure was altered, and he started craving the life-force of living things. He needed it to survive. At first Karl kept his power a secret, but he still needed to use it in order to live, and he sapped the energy from human beings, making sure not to kill them. Later, he became a doctor and hypnotherapist, and created a device that would transfer his patients life-force to himself.

After a battle between the X-men and the Sentinels, the mutant hero Havok nearly killed himself when unleashing his full powers, and was buried in rubble. The X-men brought him Dr. Lykos, thinking him to be the only doctor they could trust with Havok being a mutant. Later, when Lykos drained Havok's life-force into himself, the mutant's energy mutated Karl into a monstrous, half-pteranodon, half-human creature. He still retained his intelligence, but his personality was changed, and he became evil. He named himself after the archvillain of the Lord of the Rings series, Sauron, and went on a rampage, which forced the X-men to fight him.

Over time, Lykos continued to transform back and forth between his two forms, and he eventually journeyed to the Savage Land, where he stayed, growing more and more animalistic. He eventually came back to New York City, and ended up in the hands of the Weapon X program, who made him one of their agents. He continued to seek out victims to feed his hunger, particularly mutants, whose power makes him stronger.

Sauron in X-Men: The Animated Series

Sauron in Hulk and the Agents of S.M.A.S.H. 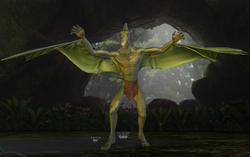 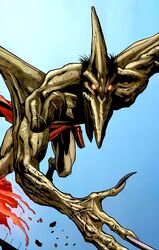 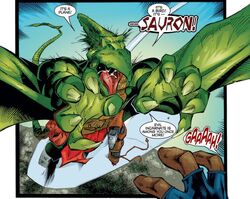 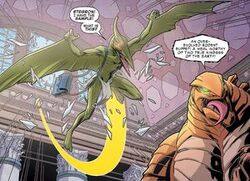 Add a photo to this gallery
Retrieved from "https://villains.fandom.com/wiki/Sauron_(Marvel)?oldid=2830385"
Community content is available under CC-BY-SA unless otherwise noted.