Seek revenge on his enemies.
Eat the Penguins and Every Small Mammal in the Central Park Zoo

Savio is an enormous, sly, powerful, manipulative, and devious Boa Constrictor who was once a resident of the Central Park Zoo after he was transferred from Hoboken. He has an extremely sneaky and deceptive personality. He enjoys eating small mammals (but temporarily ate Private wearing a monkey suit). He speaks with a Russian accent.

He was voiced by Nestor Carbonell.

He was transferred from Hoboken in The Big Squeeze, and resided in the Reptile House. Right from the start the penguins were suspicious of him, but their suspicions intensified as Mort, Marlene, and Maurice suddenly vanished. He continuously claimed that he didn't eat them (though as time went by, a bulge formed in his stomach). Although Private stil believed that he was innocent and the scientific evidence made Savio's escape impossible (Kowalski deduced that the locking system was too tough with its metal locks and sophisticated keypad and the vent was too narrow for Savio to go through after feeding).

However, after Maurice vanished, Skipper decided to try to apprehend Savio by putting Private out in a monkey suit, as Savio clearly had a taste for mammal, while Skipper, Kowalski, and Julien (who was tagging along for safety) would catch him with his guard down. However, the three had mistaken a hose the zoo manager was holding for Savio and Private vanished. Once they returned to the Reptile House for the final confrontation, Savio claimed innocence again despite his guilty outlook. However, as they were talking Savio inconspicuously opened the air vent with his tail. Skipper figured out how Savio managed to get out, but before he could say it, Savio had finished typing in the access code. He then chased the penguins and ate Julien in the process. However, Skipper in the gang managed to foil Savio by leading him into Burt's enclosure, where the elephant proceeded to beat up Savio and release the animals he captured. Due to the dangers he could prevail, he was transferred back at the end of the episode.

In the episode All Tied Up With a Boa, he returned to the Central Park Zoo to exact his revenge. When everyone heard that Savio was on his way to the zoo, they panicked and turned to Burt for help. Unfortunately, the cunning and intelligent snake anticipated this and sent Burt a surprise package with a mouse inside that scared Burt into a wall and knocked him out. With their trump card KO'd, the Penguins, Maurice, Mort, Marlene, and an oddly confident Julien then began to prepare for Savio's arrival. They set up a 3-layer defense grid (a minefield, electric fence and knockout gas) and had members situated at lookout spots to stop Savio, but the boa managed to clear the traps and corner everyone. Julien was extremely frightened as he mistook Savio for Fred (big teeth, long booty and fancy continental accent) and ran away, leaving the others to be captured and locked in a cage.

Savio then reveals his plans to swallow everyone one by one, regurgitate and swallow them in reverse order (while being "punny" about it), he left to find Julien who had returned to where the others were. However, Savio found him, and while trying to catch him, Julien ended up getting covered in popcorn butter. Ironically, this allowed Julien to slip out of Savio's grasp and in turn, cover the serpent in butter and immobilize him (snakes slither to move and slippery butter made that impossible). Soon Savio was captured by the authorities and once again returned to Hoboken. (However, no one told Burt...)

He next appears back at the Hoboken Zoo in the episode The Hoboken Suprise, so happy he wasn't angry at the penguins. This Savio was later revealed to be an android duplicate created by Frances Alberta. The real one escaped from imprisonment with Clemson, Kowalski, Hans, Private and Rico in his belly after he was sling shot out a hole in the prison by Rhonda. He participates in the final battle against the android doubles.

Savio's latest appearance was in The Terror of Madagascar after he was transferred to the Central Park Zoo by King Julien to eat a Baby Foosa (after the latter became increasingly paranoid of it constantly biting him) Savio was able to outwit the Penguins several times but upon Julien having a change of heart towards the Baby Fossa was able to keep Savio away from him until they were cornered. Ultimately, Savio was driven away (and possibly shipped back to Hoboken) when the Baby Fossa protected Julien by constantly biting Savio. 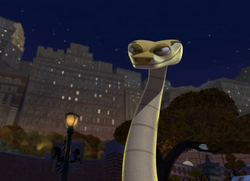 Retrieved from "https://villains.fandom.com/wiki/Savio?oldid=3386301"
Community content is available under CC-BY-SA unless otherwise noted.